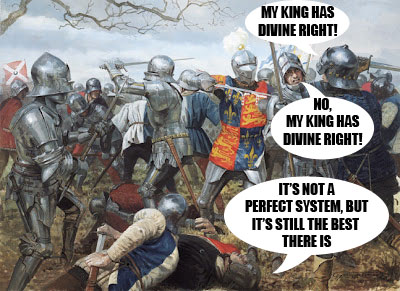 As those of you who know me will know, I am a very pessimistic person, politically speaking. For the time being I think that we, meaning both the working class and those of us who are the minority of the class who want to create a free, communist society, are pretty much fucked.

In the current worldwide battles against austerity we are losing for the most part1
, as we have been for the last 30-odd years and as we will continue to do I reckon for a good few more.

With this backdrop many people feel that “there is no alternative”, and things can never be any other way and even many pro-revolutionaries end up getting demoralised and dropping out.2
Writer Mark Fisher noted that it is “easier to imagine the end of the world than to imagine the end of capitalism” and indeed this is true. Although most end of the world scenarios presented in dystopian films3
are actually incredibly unrealistic, far less so than the idea that a short-lived and completely irrational economic system won’t last forever.4

However in spite of all this, and in spite of my own negativity I do think there are several key causes for optimism about the long-term prospects of creating a communist society, despite how distant it seems. Which are:

Capitalism has only been around properly for a little over 200 years, whereas humans have been around for 200,000 years. For comparison in scale, if humans had been around for 24 hours then capitalism has existed for less than two minutes. It is a blip, and it would be naive to think it would last forever just as most people before us were naive in thinking that feudalism and the divine right of kings was the natural state of things and would last forever.

Over the past 100 years in particular, capital has been able to use what Beverly Silver in her excellent book Forces of Labour calls “spatial fixes”, whereby employers bypass working-class militancy by outsourcing. Workers in car factories in the UK and US, for example, took militant industrial action for years to win good wages and conditions, so employers shut down plants and moved them to places like Brazil and Korea. Where the same thing happened again so they moved again to China, India etc.

However, now, new places for capital to move are running out. And workers in the most low-wage economies like China, Vietnam and Bangladesh are fighting back and starting to win.

Sure, there are some places left for this type of capital to go, like parts of Africa: but not many. So this, which essentially has been the ultimate weapon against the working class over the past century, will no longer be available to employers.

And capital used to be able to expand as the European empires conquered new lands and pulled them into the capitalist system. But now capitalism is a fully global system, with nowhere else to expand to.

By every conceivable indicator, our army that remains in Vietnam is in a state approaching collapse, with individual units avoiding or having refused combat, murdering their officers and non-commissioned officers, drug-ridden, and dispirited where not near mutinous.
– Marine Colonel Robert D. Heinl Jr.

Ultimately the power of governments and employers is based on them being able to hire some workers to kill for them. As the American businessmen Jay Gould said: “I can hire one-half of the working class to kill the other half.”

And while unfortunately it will always be the case that governments will be able to find people to kill for them the number who are prepared to do so has plummeted, particularly in the West, and seems unlikely to recover.

In World War I millions of workers went to their deaths reasonably happily at first to kill their fellow workers who just happened to be German or French or English or what have you. But it ended with mutinies on the English side and full-blown revolutions in Germany and Russia.

Even in World War II which had a high degree of ideological support from much of the population, only 15-20% of soldiers actually fired at the enemy.5

And after the mass mutinies of GIs in Vietnam in the 1960s and 70s there has not been nearly as significant a ground invasion by any Western power, nor do I think there is likely to be.

Of course this doesn’t mean that war will end, unfortunately it has just meant that governments have had to change their tactics from major ground invasions to more remote aerial and artillery bombardment, which also has the effect of massively increasing civilian casualties compared with military ones.6
But air and artillery power is not that helpful in maintaining social order at home, as Colonel Gaddafi recently discovered.

As technology continues to improve, the possibilities for ending human suffering and the reality of that continuing suffering become even more ridiculously extreme.

Even now despite massive technological and production increases, we continue to work longer and longer hours. And the annual income of the world’s 100 richest people alone would be enough to end extreme poverty worldwide.7
And nearly 1 billion people go hungry while half of the world’s food is wasted.8

On top of this, other technological developments, such as the fact that there is now the technology to allow everyone to have an instant voting device mean that representative government where we elect (usually who we think are “the least worst”) people to vote on policies for us for four or five years is almost laughably outdated. These discrepancies will continue to get bigger and even more unjustifiable.

Even now all of the ideological bases of the main prejudices which have divided the working class and pitted us against each other: sexism, racism and homophobia, have been completely disproven from a scientific point of view.

Of course on its own unfortunately this is not enough to mean that these prejudices will end. They are all deeply rooted in our economic system, in society and in culture.

However despite the working class as a whole being on the defensive since the 70s, women, black and other non-white people and LGBTQ people have continued to fight prejudiced attitudes and discrimination and have won many significant gains, especially in the Western world, including widespread attitudinal change, the narrowing of pay gaps and anti-discrimination laws which, while they are often weak and badly enforced, do provide some level of protection. In many ways they have forced capitalism itself to change, from crudely using prejudice as a form of social control to attempting to co-opt different oppressed groups into a multicultural, socially liberal capitalism with a friendly face.

I do not mean to lessen the problems which clearly still exist: like huge pay gaps between men and women, endemic physical and sexual violence against women, discrimination, mass incarceration and police harassment of black and people from minority ethnic backgrounds, widespread homophobic bullying to name but a few. But these struggles have had many successes, and I believe that trend will continue.

Across much of the world legitimacy of governments and politicians is at all-time lows.9
This is a trend which shows no signs of reversing.

This on its own is not enough to make social change happen: as in many areas cynicism is growing alongside resignation that things can’t change. However this is a necessary condition of any radical social change which will get to the root causes of our problems rather than just swap one set of self-interested politicians for another.

New communications technologies, particularly including the internet and social media have made widespread indication possible for grassroots movements and individuals.

This has made it much harder for governments to lie to the population, and for them to keep secrets from the population. While this isn’t so significant in times of relative social peace10
it becomes much more so in times of social unrest, where actual change seems possible. Historically, in revolutionary times governments and companies have relied on mass disinformation to demobilise and derail revolutionary movements, and to cover up their own atrocities. Now this is not so easy for them, and it will continue to become more difficult.

Meet the new boss, same as the old boss… We won’t get fooled again.
– The Who

The dead end tactics of the alphabet soup11
of Leninist, Trotskyist, Maoist, Stalinist, Hoxhaist etc “vanguard” parties for the supposed liberation of the working class have been tried, have failed miserably12
and have been widely discredited in the eyes of the majority of the world’s population.

And with the collapse of the USSR, a key global source for the funding and co-optation of working class movements has gone.

Both of which increase the possibility of a libertarian13
politics becoming the dominant trend in any mass working class or revolutionary movement. Nowadays more and more products are becoming abstract electronic entities which can be shared freely, and which are by tens of millions of people. With the availability of e-readers, books have joined music, films and TV shows in being items which it becomes increasingly absurd, and increasingly socially unacceptable to have to pay for.

The advent of 3-D printers will massively expand the number of goods which corporations will find increasingly hard to actually recoup payment on – and file sharing torrent sites have already started hosting 3-D printing templates of physical items.

A lot has changed in three hundred years. People are no longer obsessed with the accumulation of ‘things’. We have eliminated hunger, want, the need for possessions.
The economics of the future is somewhat different. You see, money doesn’t exist in the 24th century… The acquisition of wealth is no longer the driving force in our lives. We work to better ourselves and the rest of humanity.
– Captain Picard

Basically everything in Star Trek becomes true, and the world in Star Trek is communist, so it is bound to happen. So, in short no matter how bad things are at the moment eventually, in the wise words of Ke$ha, (libertarian) communism will win.

Back from hell: Black power and treason to whiteness inside prison walls