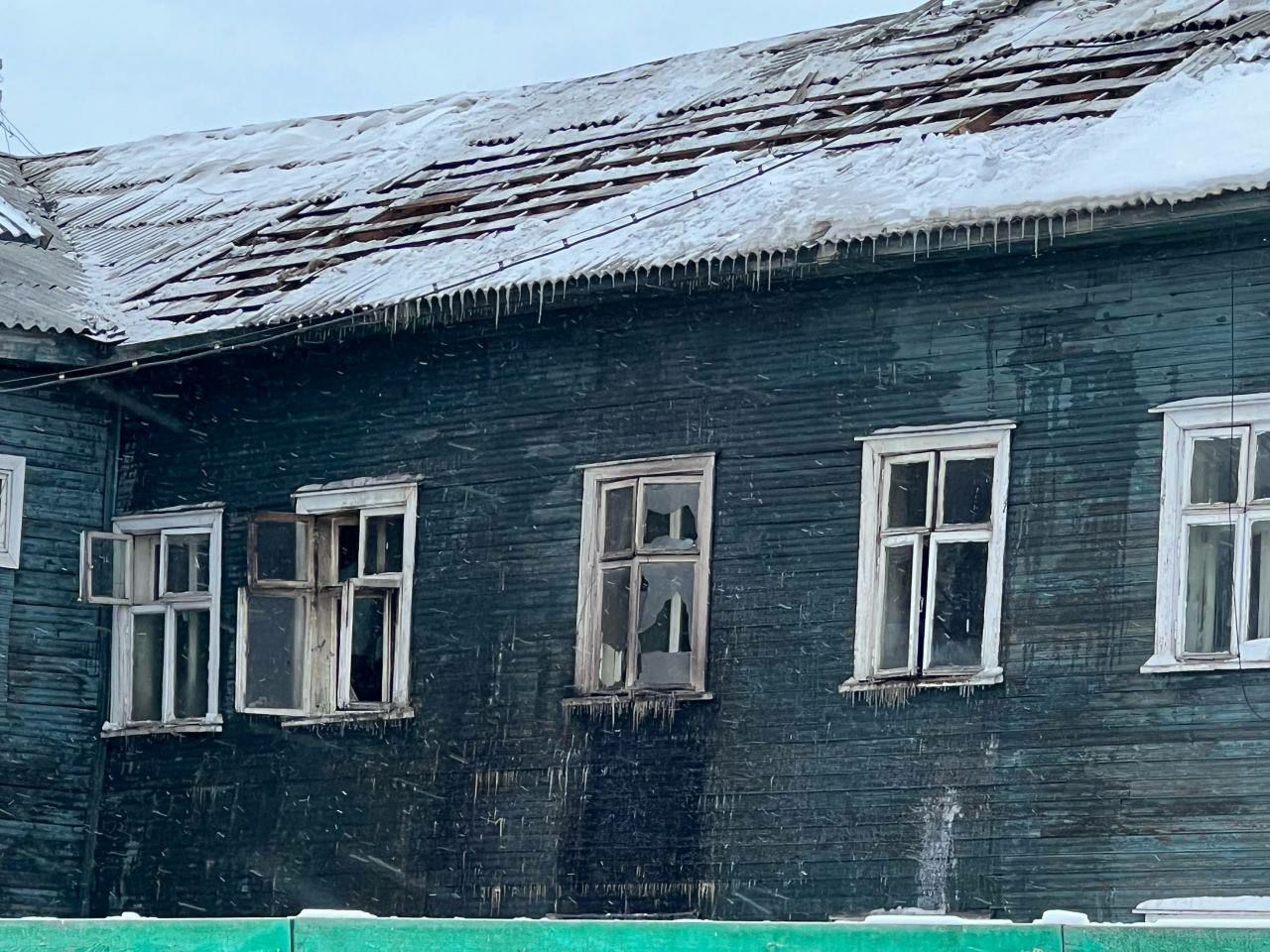 The civilian population and humanitarian groups in Ukraine this winter, with constant shutdowns in electricity and heating, especially need funds. You can donate to our online newsletter for continuous work on this international rubric and offline volunteer activities joining this fundraising. Good luck and happiness to all our supporters in the new year!

Following the noontime arson of the enlistment office on December 27 in Podolsk, on the first night of this year two Molotov cocktails flew into the fence of the united military commissariat of the Perovsky district of Moscow. A fire broke out, it was quickly extinguished. No one was hurt and the attacker is being sought.

On the night of January 3, the FSB detained three people in Rostov-on-Don. They were Ilya K. and Ivan B. (aged 17) together with Ahmed R. (aged 21). The police opened a case under Art. 213 of the Criminal Code – “hooliganism”. According to investigators, the guys wanted to attack the enlistment office with Molotov cocktails, but did not succeed “for reasons beyond their control.” Their homes were searched.

The next military commissariat caught fire on January 9 in the Irkutsk region. At 2 a.m., an unknown person climbed over the fence of such an institution in the town of Bratsk, after which a fire started. The building was damaged on an area of 50 square meters, offices on two floors were destroyed. No casualties.

According to ASTRA, 21-year-old Dmitry M. was detained on suspicion of arson on the same day. He is the sound engineer of the Bratsk TV and Radio Company, which regularly publishes materials supporting the war in Ukraine. On their website, he disappeared from the list of employees, and in the company itself, this Telegram channel was told that Dmitry “does not work here anymore.” When asked why, the TRC refused to answer. As well as to the question about the detention of the sound engineer in connection with the suspicion of setting fire to the enlistment office. This photo is also from there: 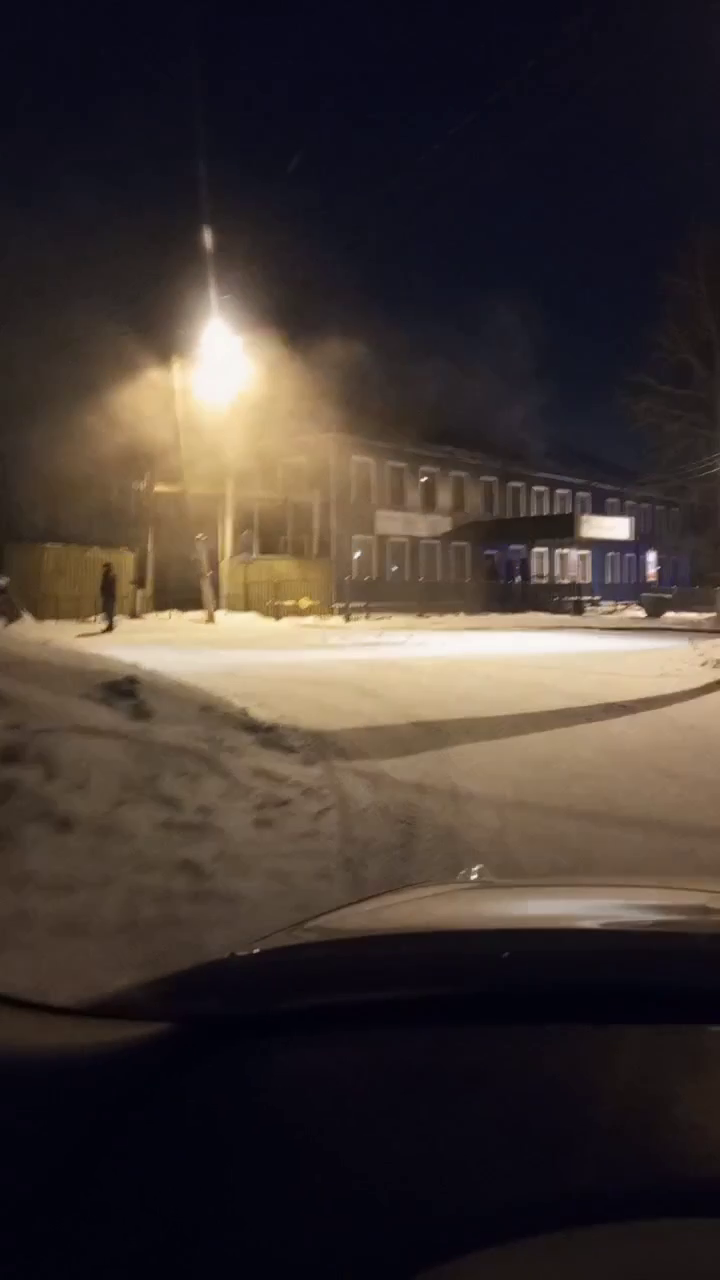 The next night, January 10, arson destroyed 500-800 archival files of former prisoners in Novokubansk. According to Baza, about 20 square meters of premises were burned, according to the Office of the Federal Penitentiary Service of the Krasnodarsky Krai – 8 sq.m. Information about the fire was received by rescuers at 04:16, and after 11 minutes the fire was extinguished. There were no casualties. In October 2022, human rights activists reported that military commissariats use penitentiary inspections to mobilize former prisoners: when citizens with a criminal record come to report to the inspector, they are handed subpoenas. People with a criminal record are in a vulnerable position: they understand that for refusing to take a summons, new cases can be fabricated. However, there is also a version that the administration itself could set fire to the archive to hide some violations.

Then, 34-year-old unemployed Alexander Rodimov was detained on suspicion of arson. He had no previous convictions and said he broke glass in the building and set fire to paper to get warm. A criminal case has been initiated under the article “deliberate destruction or damage to property” (Part 2 of Art. 167). A man faces up to 5 years in prison.

On the night of January 11, unidentified people threw a Molotov cocktail at the enlistment center in the village of Magdagachi in the Amur region. “Firemen arrived. There was a slight smoke and fire, but they managed to extinguish everything, nothing was damaged, except for the equipment that was on the window”, the staff said. The head of the district Andrey Goryunov stated that the attackers tried to destroy file cabinets.

The first repressions against rail guerrilla in 2023. On the morning of January 9, it was reported about the arrest of the Krasnoyarsk partisan cell. The group is blamed for several episodes of setting fire to relay cabinets occurred from December 26 to January 4. Trash channel SHOT writes that the defendants are asocial elements: “The damage was promptly eliminated, it did not lead to consequences. The arsonists were caught. They turned out to be a first-year student registered with the commission on juvenile affairs, a homeless person and their three unemployed and convicted friends. All of them were detained. Three from a marginal company, including a student, have already been sent to a pre-trial detention center.” In fact, guys aged 17 to 22 are clearly like-minded people and students. Now they are accused under the Art. 281 of the Russian Criminal Code – “sabotage”. 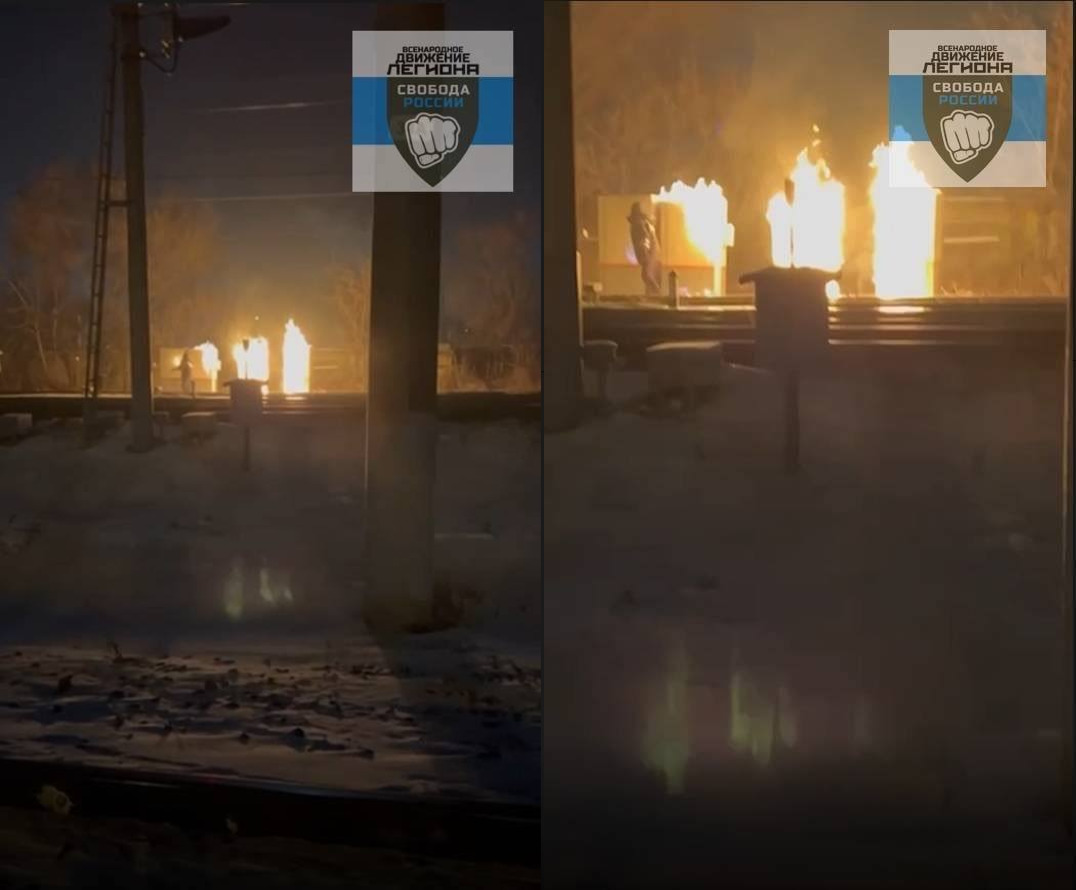 An attack near Krasnoyarsk

Another group of rail partisans was detained on January 5 in the Chelyabinsk region. From the words of punishers, three men were detained while trying to disable a traction substation at some station of the South Urals Railway. It seems that a canister of gasoline, gas cylinders and other items were confiscated from the partisans on the spot. Now they are in a pre-trial detention center and are also charged with “sabotage”.

One more news from Western Siberia was supposed to be in our last review, but there was not enough space for it, so we publish it belatedly. On the night of November 18 and 25, anti-war activists torched Z-cars on Aptekarskaya Street in Yekaterinburg: Chevrolet and Ford Focus. The head of the press service of the Ministry of Internal Affairs for the Sverdlovsk region said that “detectives are analyzing footage from surveillance cameras, interviewing residents of the microdistrict, and also carrying out other operational activities,” but the results of the procedural measures are unknown. The arsonists made several videos of a job well done: 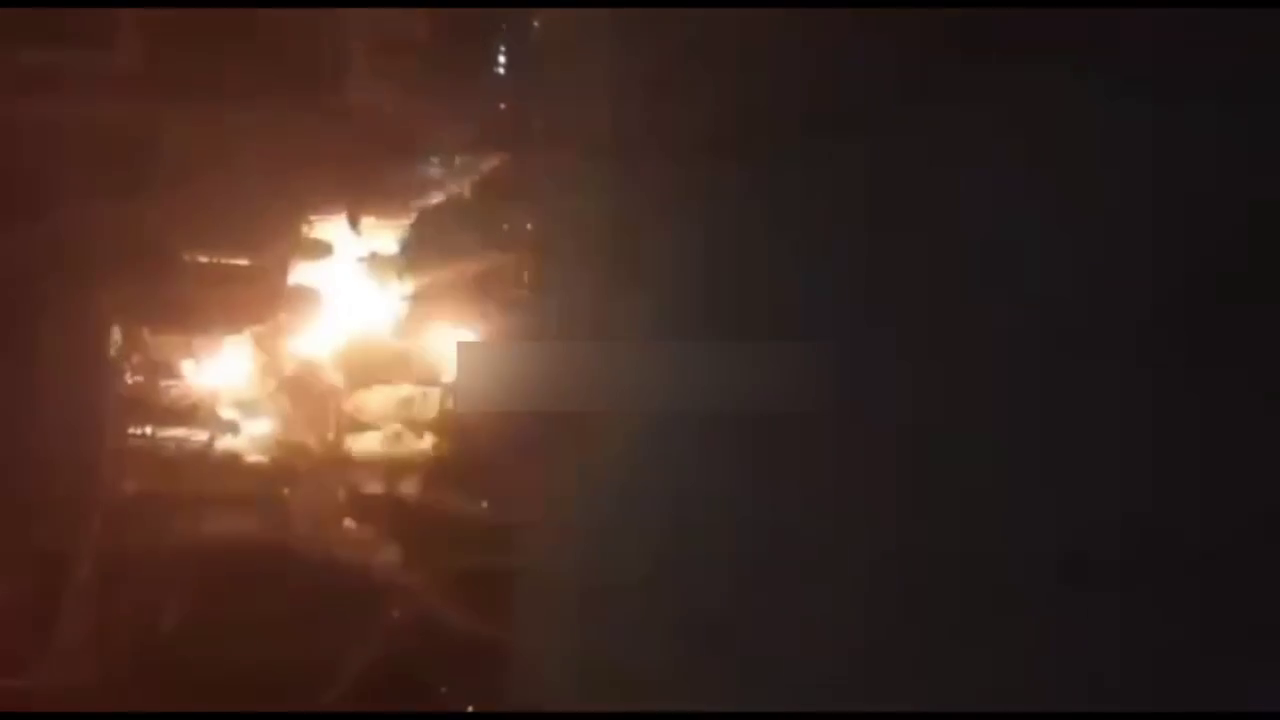 A very simple way to distract punitive structures: some telephone terrorist pretended to be a soldier who had escaped with a weapon. An unknown man called police departments in St. Petersburg, Moscow and Rostov-on-Don for 24 hours, claiming that he was 33-year-old Dmitry A. and he had fled from a military unit in Moscow. He also announced on the phone his intention to carry out explosions. During the calls, he constantly stated different data, calling himself either a conscript, or a mercenary from the Wagner’s group, or a native of Ukraine. Police, having checked the information, did not find a hooligan. Nevertheless, some Russian media presented information about the flight of a soldier from a military unit in Moscow as a fact. The caller’s number was reportedly registered in the Tula region and was used by various people, including a labor migrant.

On December 26, it became known that a court in the capital of Dagestan fined Isa Abdulayev, a participant in a rally on September 25 against the war and mobilization. 50 thousand rubles in a criminal case on the use of non-life-threatening violence against a cop. Abdulayev hit Police Major Magomedov twice in the head when he demanded to stop participating in the protest. The young man pleaded guilty.

Not a very political act, but also about social war: as was published by ASTRA, around midnight on January 3, in the border village of Belaya Berezka in the Bryansk region, a sergeant from military unit 31135 killed a major from military unit 30683 after beating by him. There was some conflict between Alexander Kudilin and Vladimir Churilov, during which the first used physical force against the second. After that, Churilov opened fire in the direction of Kudilin. The major died on the spot.

The general condition of the invasion troops was exhaustively described by one of the leading Russian military experts, monarchist Igor Strelkov-Girkin: “On one of the closed chats where I am present, literally today the question was discussed: “what to do?” And there, intelligent people came to the conclusion that in the current situation the RF is in complete “zugzwang”: it is impossible to stand on the defensive, since this quickly worsens the strategic position of Russia, and it is impossible to advance, since this is fraught with a quick military catastrophe – the combat effectiveness and morale of the army strongly reminiscent of the same before the July offensive of Kerensky 1917. Well, the fact that the Kremlin will nevertheless go for cardinal personnel and other necessary reforms, as long as the situation at the front is relatively stable and there is a little time for their implementation, is already out of the question … no one believes in this anymore”, he notes in his Telegram post on January 3.

From other hand, during the Verdun-style siege of Bakhmut and Soledar this month in the Donetsk region, information appeared about internal decay in the Ukrainian forces. It turns out that near Soledar there were Ukrainian units that fled from the front line. Olexiy Arestovich, an adviser to the Office of Zelensky, told during an evening stream on January 10: “We have different people who refused to dig trenches. Or, when they were led into ready-made trenches and said: “just stand still,” they said: “the enemy is there, let’s run two kilometers back.” That’s not all, they not even 10%, but they are there, and when a company runs away from the direction, their neighbors become very sad.” From his words, during the defense of the town there were many refusers who said that they “cannot fight in this terrible war”…

In the previous two reviews, we wrote a lot about similar strikes by Russian soldiers in the Lugansk region. The only pity is that it was on different sectors of the front. If our forecast was confirmed that this year will begin with an analogue of the Verdun meat grinder, perhaps the hopes for military fraternization will be confirmed too?

In addition, you are welcome to learn from this recent material how the continuation of general mobilization in 2023 will strengthen social control and competition among the workers of Ukraine.

At the same time, you may be interested to read about Russian builders tricked into cruel conditions for fortification work in the occupied territories.

Black Consciousness 1977-1987: The dialectics of liberation in South Africa

Women, the unions and work, or… what is not to be done – Selma James