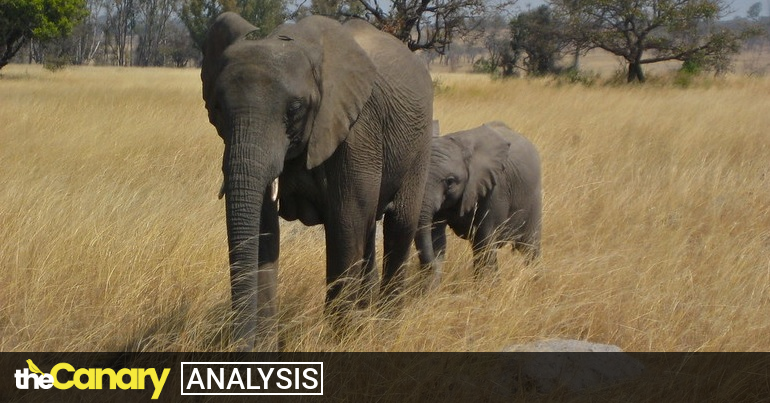 Zimbabwe will host an Elephant Summit between 23 and 26 May, after recently courting European politicians to elicit their support for a sale of its elephant ivory stockpile. Such trade will reportedly be a focus of the upcoming meeting, which aims to find a ‘common stance‘ on the issue of selling ivory.

A number of NGOs, many of them African, have condemned the push for reinvigorating the trade in elephants’ ivory. They released a statement on 20 May that warned the summit:

International commercial trade in new ivory has been illegal for decades. However, a legal trade has remained for older or antique ivory, which has allowed the continuation of some international and regional trade. A number of countries have banned the ivory trade in their domestic markets too, with some exemptions.

These bans are in place to protect elephants, because the ivory trade is a leading cause of their demise. The International Union for Conservation of Nature classifies African savannah elephants and Asian elephants as endangered. African forest elephants, meanwhile, are critically endangered.

The ivory trade encourages poaching of elephants, as illegal traders can use legal markets as a cover. This became abundantly apparent in legal sales in 1999 and 2008.

The Convention on International Trade in Endangered Species (CITES) – a global wildlife trading body – allowed one-off international sales of stockpiled ivory from Botswana, Zimbabwe, and Namibia in 1999. CITES added South Africa to the list of approved sellers for a second one-off sale in 2008.

The results were “disastrous” for elephants, the Revelator reported. Charan Saunders wrote that:

In his book It’s Not About the Bats, journalist and author Adam Cruise also noted that, according to an elephant census in 2016, the continent’s elephant population “had declined by a third in the seven years since the second one-time sale”.

Nonetheless, Zimbabwe is now pushing for exactly the same kind of one-off sale of its stockpile again, as Africa News reported.

In its coverage of the upcoming elephant summit, Bloomberg highlighted comments from Tinashe Farawo, spokesperson for Zimbabwe Parks and Wildlife Management Authority. He suggested that the event’s aim was to “build consensus” on “elephant conservation” among African countries ahead of an upcoming CITES meeting in November. The monetising of stockpiles is among the issues on the table, the Chronicle reported.

Zimbabwe united with Namibia and Botswana to press CITES, at its meeting in 2019, for permission to sell their ivory stocks. That bid failed, as most countries that are parties to CITES see the ivory trade as a threat to remaining elephant populations. This includes the majority of African nations which, as part of the African Elephant Coalition (AFE), support “a global ban on all ivory trade”.

As the NGO statement highlighted, Zimbabwe hasn’t invited most African elephant range states – meaning countries where the elephants live and roam – to the summit. It has, however, invited China and Japan. These are two countries with a history of being large consumers of ivory. China has, however, introduced a ban in recent years. In 2019, the Diplomat reported that its illegal market was still “booming” though.

45 NGOs signed the statement against allowing international sales of ivory – be they one-off ones or otherwise. These include the Environmental Investigation Agency, the African Nature Investors Foundation, and the EMS Foundation.

Noting the progress – both international and domestic – that’s been made through ivory bans, they explained that demand is currently at a “historic low”. They argued:

Elephants are a migratory species and therefore require coordinated international conservation efforts. At a time when demand for ivory is at an historic low and awareness of the need for sustained biodiversity is at an historic high, we urge the international community and policymakers to resist attempts by Zimbabwe and Southern African countries to restart ivory trade.

Zimbabwe, however, has argued that the sales would enable it to fund communities and conservation. Officials say human-elephant conflict has killed 60 people so far this year.

According to Farawo, its ivory stockpile is worth over $500m.

Saunders, an environmental accountant, questioned in the Revelator an earlier figure of $600m that Zimbabwe had offered for its combined stockpile of ivory and rhino horn. She said that, based on the black market price for ivory and rhino horn at the time, a “more realistic valuation” of its ivory stockpiles would “give a potential income of only $19.5 million in U.S. dollars”.

Compare this, she said, to the estimated $1.6m every single elephant can rake in for host countries during their lifetimes in ecotourism. Zimbabwe claims to have a population of over 84,000 elephants, according to the Chronicle.

Moreover, Saunders argued that the ensuing spike in poaching which the sales would unleash would lead to increased costs in anti-poaching efforts, rendering the whole exercise a false economy.

Our use isn’t sustainable

The wildlife trade, whether it be ivory, other body parts, or live animals, is taking a deep toll on the living world. Much of it happens under the banner of so-called ‘sustainable use’. But as a recent study indicated, there’s very little that’s sustainable about the current levels of use. It found that utilised vertebrate wildlife species saw declines of around 50% on average between 1970 and 2016. The species that people don’t use, meanwhile, declined by less than 3%.

The intricate and interconnected web of lives that exist on the planet is critical to the survival of us all. We need to be moving away from use that exacerbates the extinction crisis. Resuscitating the international ivory trade is a dangerous step in the wrong direction.