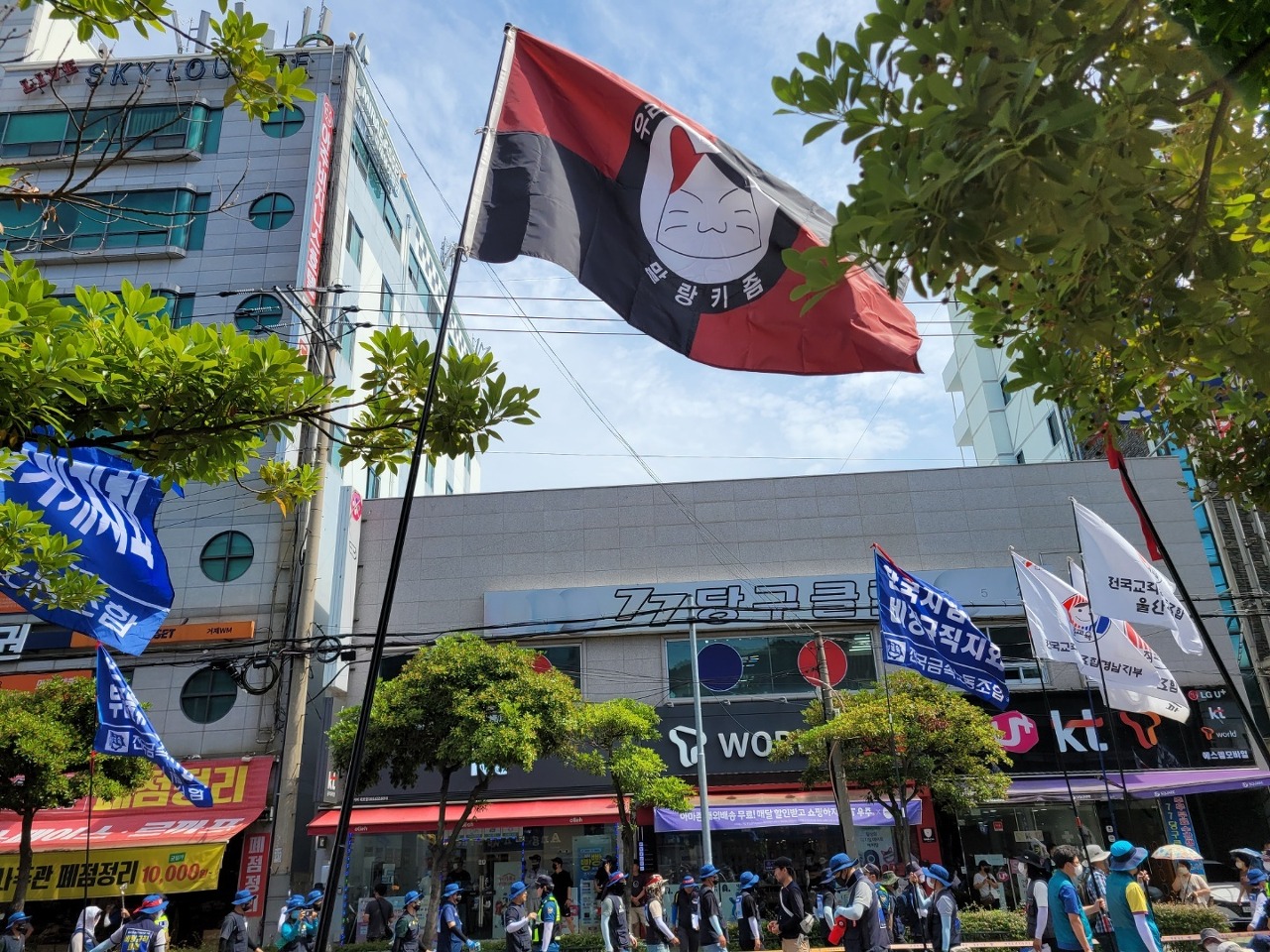 Continuing the protest last week, we headed back to Geoje once more. Although there were ups and downs, in the end, on July 2nd, the workers in Yeongnam workers protest decided to head to the direction of the subcontracted workers of Daewoo Shipbuilding(DSME) in Geoje in solidarity. Before heading to Geoje, on Thursday, June 30, after taking part on the Sejong Hotel Thursday rally in solidarity, we took on our turn of the sit-down, and then immediately on July 1, along with the fired workers of the Sejong Hotel, we marched on foot to Yongsan. The asphalt already looked as if they were pumping steam.

I do not want to go into detail about the workers protest held in Geoje too much. Since many comrades from all over the place went to participate in solidarity with the subcontracted workers of GeojeTongyeongGoseong shipbuilding branch(GTG for short), and the words of many such people are already out there all over the place. Instead, we would like to briefly introduce the meeting with comrades from GTG that was held after the workers protest.

The meeting was held at the branch office on the 2nd floor of the building with a Bi Chon Chicken Okpo chain on the 1st floor, opposite the west gate of DSME. Comrades who are fighting fiercely in all places gathered here to listen to and share opinions about the progress of the struggles of the subcontracted workers of DSME, the current protest situation, and the future aims and objectives of said struggle. And in midst of that, comrade Kim Hyung-soo, the head of the shipbuilding subcontracted branch of GTG, said these words clearly, without hesitation in front of many other comrades. So far, in the struggle of precarious workers, there have been many lawsuits filed to confirm the status of workers under primary contract to confirm that they were dispatched illegally. However, GTG does not file a lawsuit to confirm such primary worker status. He said he will solve this situation by direct struggle, not by law.

I wanted to get up immediately after hearing such a welcome story in an unexpected place and hug my comrades right then and there. Since the Non-regular Workers Act came into effect in 2007, there have been a number of lawsuits to confirm the status of workers in the scene of struggle. There were cases of victory and cases of loss. But seeking legal advice is long and arduous, as we all know. Time flies without us even being aware of it, and there come respective problems whether we win or lose the lawsuits. There are already numerous companies that do not hesitate to ignore the recognition of unfair dismissal by the Labor Relations Commission and National Labor Relations Commission as well as said litigation to confirm worker status. As a primary example, the public transport union under Asiana KO branch that achieved to get a ruling by the National Labor Relations Commission and even the administrative court that the company indeed committed unfair dismissal, has continued to protest against Kumho Asiana and Asiana KO, who continue to ignore the ruling. And on the 777th day, in order to achieve reinstatement, a struggle was held to occupy the Asiana KO headquarters located in Magok-dong, Seoul. However, on July 3rd, Asiana KO did not even bother to talk to the workers, rather, they packed their bags and abandoned the office in broad daylight and fled [1]

Needless to say, in the case of losing a lawsuit for confirmation of worker status, the impact can be as expected. Even if you start with a mindset that you do not mind the verdict, losing will directly or indirectly affect the morale of the struggle front. Anger may become the driving force behind a more heated struggle, but it may well not.

But before anything else, are the laws, and the state actually on the side of workers to begin with? Who makes those laws? Who were they made for? The Serious Accident Punishment Act was enacted and implemented, but the target and criteria for punishment are ambiguous. Many people are doing their best to get the Anti-Discrimination Act enacted and bear fruit, but the strategy is ambiguous every time. If so, should we lead the social struggle over such specific details this time? How long do we have to tire ourselves with struggles over the aftermath, with its disadvantages included?

Anarchism, and its specific subset, anarcho-syndicalism, which claims that unions could play a pivotal role in social transformation, suggest going beyond these limits. The legal battle, of course, is a necessary phase and maybe a valid one. And can be used as practical strategies anytime. However, it is difficult to move forward if you are trapped in it. It is time to change the tide that has continuously formed disadvantages since the enforcement of the Non-regular Workers Act in 2007 once and for all. Comrades of subcontracted workers at DSME in Geoje created an offensive front by fighting to occupy the dock even going so far as risking their lives. Comrades from all over the country who answered to this struggle are making the front even stronger. This here is a struggle that crosses the line set by capital, and cuts through the trap set by law and the state. “Our mutual aid” – Malangchism, will never turn away from this front, nor will we ever leave the tides of solidarity. Anarchism is not meant to lead an “anarchist-approved world” among the struggling workers. It could not be called anarchism if so. Anarchism affirms that all working masses are themselves already capable of creating another world right now against the oppression of capital and the state. And now, the struggle of subcontracted workers at DSME shows proof of that possibility. So how can we possibly not join in solidarity?

They may be busy with the scene of another struggle, in their respective places. Every single one of those places is indescribably important and precious. Of course. However, as anarchists, if you believe that trade unions are the most powerful means to destroy capital and the state and to forge a new path of society, I urge to you to join us in this struggle. Here unfolds the forefront of the most decisive anarcho-syndicalism of 2022. Let’s not give up on this front and make up excuses for it later. Such excuses come up because we are desperately looking for a reason not to do it. Instead of looking for the reasons not to take part, let’s just head to Geoje. At the meeting, branch chairman Kim Hyung-soo, when asked what is most important and necessary for the current struggle, answered without hesitation, “Direct solidarity of comrades”. Let’s take their hand and join them.

At this coming Friday, July 8, hosted by KCTU, another massive protest will be held on Geoje. ‘Our mutual aid’ – Malangchism, will be heading to Geoje this week once more. To join all the comrades for the common aims. With bigger solidarity and more organizations than ever, let’s turn the struggle of the subcontracted worker comrades of DSME to a victory that no one could ever dare doubt anymore.