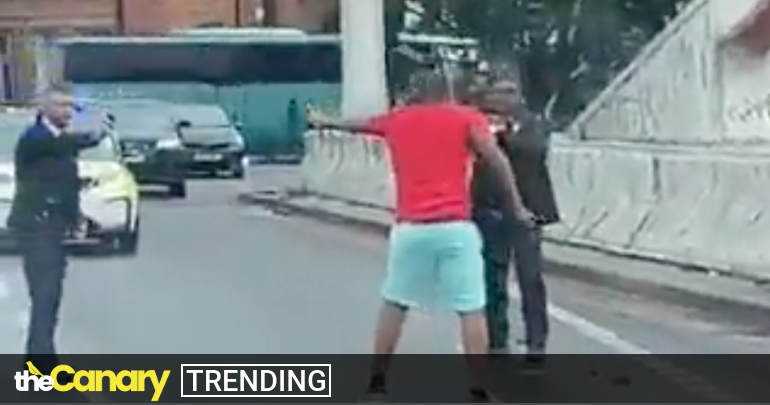 The Metropolitan Police tasered a Black man several times on Chelsea Bridge Road in London. As they advanced on him, the man fled and jumped into the river Thames. He was rescued from the river by the Royal National Lifeboat Institution. The man is as yet unnamed. As usual, people have to rely on civilian recordings of the incident to see what actually happened.

1/3 ⚠️ Trigger Warning : distressing content of the moment leading up to a man’s death

We are saddened to learn that the Black Man repeatedly tasered by Met Police and pursued until he fell into the River Thames had died pic.twitter.com/uOhytw74L5

The police have said they received reports that the man was holding a screwdriver. As the video shows, he is clearly in some distress.

As the police taser him, he falls to the ground screaming in pain. He yells something at the two officers advancing on him. They then tase him again and the man rolls on the ground, twitching. This happens yet another time. The man then runs over a barrier at the side. As the officers pursue him, he jumps over the railing and into the Thames.

We can trust neither the mainstream media nor the police to accurately report what happened.

The police said that after their officers tasered the man he: 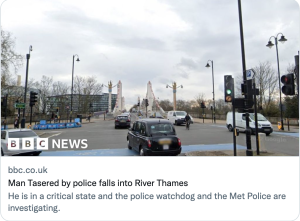 Sky News made it sound as though the man simply fell into the Thames and was then pulled out: 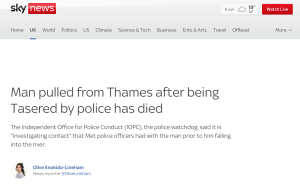 Many people on social media discussed these awful policing tactics. Others also noticed the terrible reporting:

Why is the media reporting, man dies after falling into the river Thames as police tried to detain him.
When footage clearly shows, he actually jumped off the bridge.

We spoke about this recently via Twitter Spaces. The Met Police have a lot to answer for. Black people beware, they will use a taser on us without a moments hesitation. The UK’s biggest gang is still institutionally racist. pic.twitter.com/por3F3TUI6

Serious scrutiny needed on the multiple use of taser by police officers. Very disturbing video footage shows no attempts at de escalation and a Black man in obvious distress. More Tasers results in more deaths and serious injuries. https://t.co/baSSTp1kIA

And outgoing Goldsmiths student union president Sara Bafo said we must withdraw power from the police:

The @metpoliceuk repeatedly tasered a Black man until he fell into the River Thames.

I’m raging because this will keep happening until we withdraw power from the police until we no longer rely on a structure that is designed to kill us.

Moreover, journalist Lorraine King explained how Black people are more likely to be tasered for longer than white people:

A lot of people are asking why the race of the black man who sadly died when he fell into the River Thames after being Tasered three times is relevant.
It’s relevant because black people are twice as likely to be Tasered for longer than a white person ??https://t.co/CFOOXx10cp

Figures from the Home Office a year ago show:

In the majority of cases involving either allegations of discrimination or common stereotypes and assumptions, there was evidence that the individual concerned had mental health concerns or a learning disability. This supports findings by others that the intersectionality of race and mental health can increase the risk of higher levels of use of force.

If the media reports the police’s actions in a passive or sanitised way, it only enables them to continue to be violent towards Black people. This man did not “fall” into the river. He died trying to escape police violence.

We want our communities to be given the power to respond to the 80 per cent of non-criminal incidents that the police respond to – as we believe that a community response, rooted in resolution and meeting individual needs, would have better outcomes.

We must withdraw our consent from aggressive policing. And in order to do that, we need to be able to understand and call out journalism that’s in service to the police and not the public.