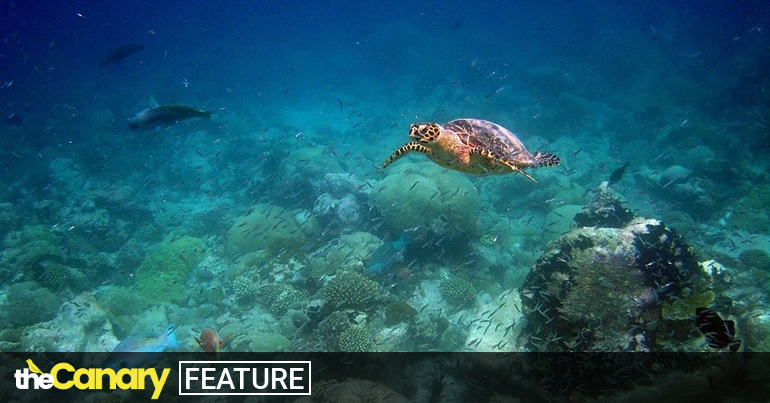 This story was produced as part of the 2022 UN Ocean Conference Fellowship organized by Internews’ Earth Journalism Network with support from the Calouste Gulbenkian Foundation (UK Branch).

Britain’s expulsion of Chagos islanders from their Indian Ocean home in the 1960s and 70s is a shameful moment in its history. The eviction, which the UK carried out after allegedly pressuring Mauritius to sell it the islands ahead of independence, is an enduring part of the former’s colonial legacy. Chagossians continue to fight for the right to return home to this day.

At the recent UN Ocean Conference in Portugal, Mauritius laid out an ambitious plan. It could enable the resettlement of some Chagossians on the islands. The proposal involves the establishment of a vast Marine Protected Area (MPA) in the Chagos archipelago.

‘Get some rocks which will remain ours’

As historian and journalist Mark Curtis explained in his book Web of Deceit: Britain’s Real Role in the World, the UK effectively created a new colony during its mid-20th Century decolonisation process. Curtis noted that a UK official laid out their aim in a secret file, namely to “get some rocks which will remain ours”. The new colony included Mauritius’s Chagos archipelago and islands which were part of the Seychelles. The UK named this area the British Indian Ocean Territory (BIOT).

Since 1966, the UK has leased some of these ‘rocks’ to the US military. It brutally removed the Chagossians to facilitate the deal and assert its claim to the islands, allegedly poisoning and gassing the islanders’ beloved dogs in the process. The US has a base on Diego Garcia, the archipelago’s biggest island, which was given its name by the UK.

The UK handed the Seychelles its islands back in 1976 when it gained independence, ostensibly because the US and UK militaries didn’t plan to use them. But it has fought tooth and claw to keep hold of the Chagos archipelago. The US military lease there doesn’t expire until 2036.

The UK created a massive Marine Protected Area/ MPA around the archipelago in 2010. It claims the MPA serves to “ensure the future protection” of the highly biodiverse waters. But WikiLeaks has released US state department cables that indicate UK officials believed the MPA would stymie resettlement of Chagossians for the long-term.

Mauritius challenged the legality of the MPA under the UN Convention on the Law of the Sea (UNCLOS). As David Snoxell, the UK’s Chagos Islands All-Party Parliamentary Group (APPG) coordinator, recently wrote in Mauritian publication l’Express Weekly, the BIOT MPA banned Mauritius from inshore fishing in Chagos waters. The UK had committed to such access for Mauritius in the original agreement for the purchase of the islands.

The UNCLOS tribunal ruled the MPA unlawful in a 2015 decision.

Successive rulings against the UK

This is just one in a series of determinations against the UK in relation to the archipelago in recent years.

The International Court of Justice (ICJ) issued an advisory ruling in 2019 that the separation of the islands was unlawful. Later that year, a majority of UN member states also voted in a non-binding resolution that the UK should hand the territory back to Mauritius.

In 2021, the International Tribunal for the Law of the Sea (ITLOS) confirmed Mauritius’s sovereignty over the Chagos Islands and urged the UK to end its occupation of them. ITLOS is currently engaged in establishing the maritime boundaries between Mauritius and the Maldives, known as delimiting. Once that’s done, the former intends to move forward with its own plan for an extensive MPA.

Mauritius laid out the plan at an event at the UN Ocean Conference on 1 July. Dr Rezah Badal, director general of the Department for Continental Shelf, Maritime Zones Administration & Exploration, ​explained that the country will take a “scientific approach” to the MPA.

It will rely on four key principles, he said. These are:

The country extended an open invite for cooperation from the international community, including those in the scientific and environmental sphere, in establishing and managing the multi-purpose MPA. The plan currently is to designate the vast majority – 520,000 km² – of the 650,000 km² area as a ‘sustainable use zone’ with “limited fishing activities”.

The Canary asked the Mauritian government whether it will permit industrial fishing, which is typically highly damaging to marine ecosystems, anywhere in the MPA. No comment was received by the time of publication.

Not an invitation for excessive exploitation

Pre-recorded comments at the event from Mauritius’s prime minister Pravind Jugnauth indicated that resettled Chagossians will be the “future custodians of the MPA”. President of the Chagos Refugee Group Oliver Bancoult also spoke in the session. He left his island home of Peros Banhos in the archipelago at the age of four.

Bancoult asserted that assessments a few years after the Chagossians’ removal showed that their around 200 year presence on the islands had left coral reefs in a “near pristine state”. Looking forward, he said:

we will run a sustainable and well-managed fisheries both to feed ourselves and to provide income and employment and, if possible, export food to other nations.

Bancoult further insisted that the MPA is “not an invitation to foreign states to remove precious resources from our homeland”.

As Rev Ocean’s Dr Alex Rogers explained in a pre-recorded presentation, the waters around the archipelago are extremely important in ecological terms. They contain between 25-50% of Indian ocean coral reefs considered in an excellent condition. Meanwhile, the fish in these reefs are six times as abundant as reefs elsewhere in the Indian ocean, which Rogers’ presentation indicated was largely due to the presence of large fish, such as sharks.

Additionally, the locality is a key nesting area for both green and hawksbill turtles. It’s also important for bird species, with 12 of the islands “classifiable” as Important Bird Areas (IBAs) by the International Union for Conservation of Nature.

Rogers explained that the proposed MPA contains both opportunities and risks. Done well, it could ensure protection of the reefs and wildlife, with Chagossians able to monitor and limit damaging activities, such as illegal fishing, after resettlement. But ensuring the sustainability of fishing activities – particularly the protection of bigger fish such as sharks – is paramount to its success.

According to speakers at the event, illegal fishing is an existing issue in the locality. Philippe Sands QC, legal advisor to the Mauritius government on the Chagos Islands, explained that the UK’s MPA is meant to be a ‘no-take’ zone aside from three nautical miles around the US base. But despite this, the UK hasn’t passed any regulations to enforce that zone. Moreover, he said that the UK only has a single vessel patrolling the 640,000 km² area.

The Canary asked the Foreign, Commonwealth and Development Office about the level of protection in its declared MPA and Mauritius’s plan. A spokesperson said:

We do not recognise the proposals made by Mauritius at the 2022 UN Oceans Conference. The UK declared the British Indian Ocean Territory Marine Protected Area in 2010.

Others in the UK, however, have taken a different position. Former Labour Party leader Jeremy Corbyn is honorary president of the Chagos Islands APPG. He told The Canary:

I welcome this Mauritian initiative because, unlike the BIOT MPA of April 2010, it is in conformity with international law and the requirements of international courts (ICJ, UNCLOS Tribunal) and the UN General Assembly.

He said that the UK’s MPA “was intended to be” a barrier to the resettlement that Mauritius’s plan offers the Chagossians. And he insisted that the APPG will continue to champion the cause of the Chagos community, some of whom live in the UK.

Corbyn highlighted that the Chagos community “have been extremely active in making their needs known over the years”. For some Chagossians, Mauritius’s plan for the MPA promises to meet those needs.