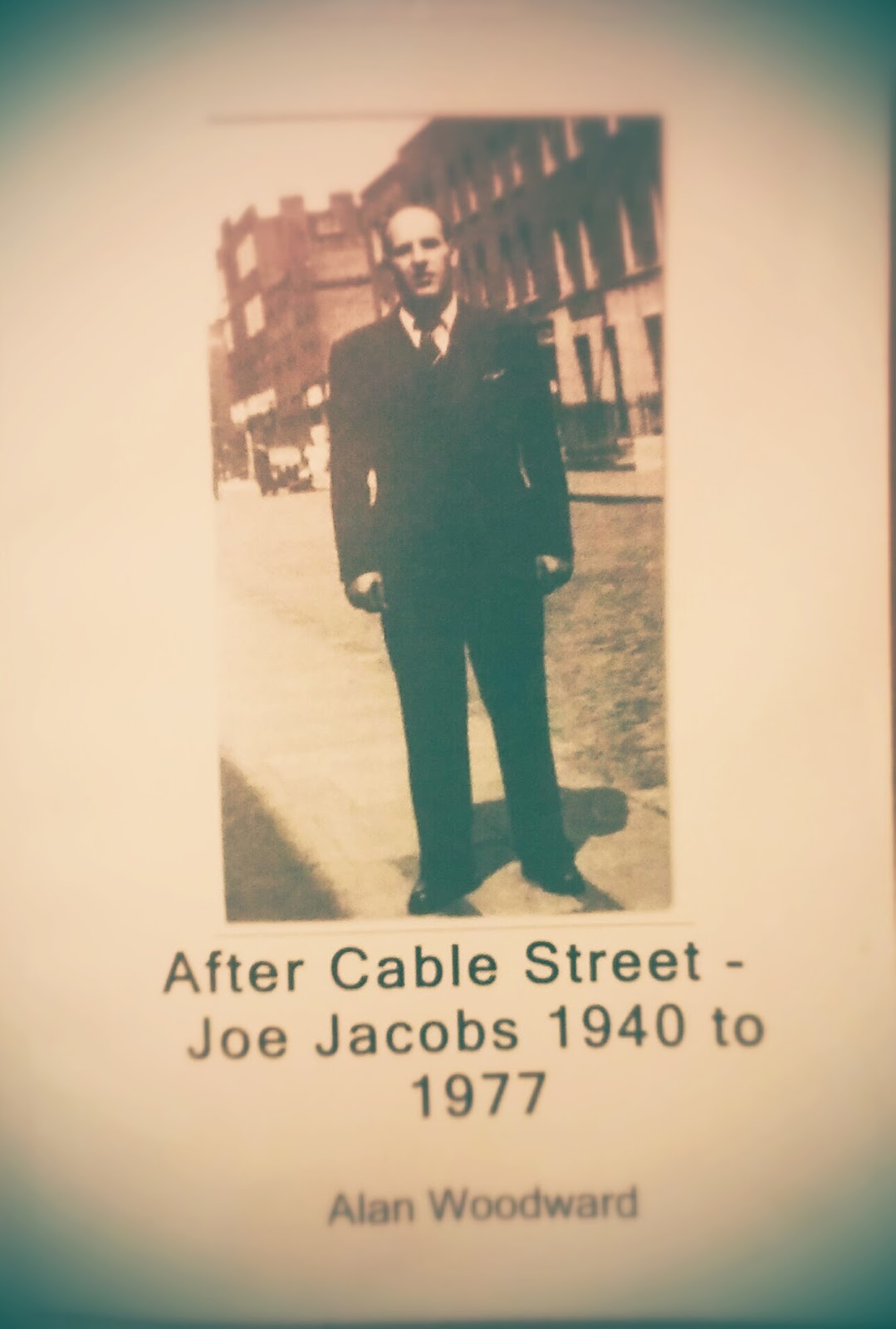 Alan Woodward has done another service to radical history in producing this well-researched booklet, continuing the narrative of a varied and active political life begun in its subject’s posthumously published autobiography (Joe Jacobs, Out of the Ghetto, 1978). Using Joe’s letters and other papers, backed up with reference to a range of background sources, he places the life in the context of its times, showing how Joe’s political ideas developed after his days as a Communist Party activist in the 1930s. Those ideas were repeatedly applied in support of working-class struggle; and against those who Joe believed would take over or sell out that struggle for their own ends.

The core chapters are: Joe and the war; Shop stewards, workplaces, unions and the occupation; Joe and the international dimension; Strike reporting; Politics and organisations. Key events – confrontation with military authority, industrial strife and organising, political debates and clashes – and Joe’s role in them are recounted along with their effects on his thinking, with frequent quotes from his own writing, some of it still unpublished notes. Relevant theories and their more notable advocates are discussed in detail, displaying Alan’s impressive knowledge of the history of leftist ideas in the 20th century. The helpful lists of dates, sources for each section, and index are further added value.

In the concluding section, Expulsion and Conclusion, Alan discusses Joe’s association with Solidarity (‘for Workers’ Power’ was the subtitle of the magazine, later ‘for Social Revolution’, not part of the group’s name) in the early to mid 1970s, which was amicable and mutually beneficial for several years but terminated in sadly downbeat fashion, in one last ‘expulsion’ for Joe.

Alan devotes perhaps a disproportionate amount of space to the Solidarity group, or his own (in my view) somewhat idiosyncratic picture of it, and to one of its publications in particular, as if this was an article of faith to which we all subscribed. It wasn’t and we didn’t, as the introduction to the pamphlet in question itself makes clear. As a member of the group during and for quite long after Joe’s time in it, I have to say – at the risk of adding to the disproportion – that this is not exactly Solidarity as I knew it. Alan makes us sound too big, organised and party-like, and he will insist on labelling us ‘marxist’, without making it sufficiently clear that this is his assessment of its nature rather than what the group called itself (‘libertarian socialist’ was the preferred term). There is a longish list of supposed local groups (p.54 – two men and a dog, or a couple and a cat, might have been about the strength of some of these) and a particularly jaw-dropping assertion (pp.64-65) about Solidarity using “the political yardstick – in their case of basic marxism… (What?!)

Sometimes he qualifies the brand as ‘libertarian marxist’ (which many of us would consider a contradiction in terms) whereas Solidarity’s long-drawn-out analysis was concerned specifically to show the inherently non-libertarian tendency of essential elements of marxism. This extensive critique meant that Marx was indeed quoted much and often in Solidarity publications, as Alan points out (with the misleading implication that such references are in themselves evidence of marxism). Given that there are problems with all labels, it seems perverse to slap on one which was not used and would, I believe, have been rejected in no uncertain terms by most members over the years. Apart from anything else, it goes against the libertarian grain, and is ahistorical, to derive a complete worldview from one individual, and a dead white male at that. One day the ‘insiders’ history’ may appear… (see postings on this blog, October and November 2011). In the meantime, readers can judge for themselves from numerous texts still around on the internet.

But the half-dozen Solidarity years form only a small part of the Joe Jacobs story, and the account here of his interactions with the group and eventual parting from it in the notorious (or deplorable, or farcical) ‘expulsion’ episode1
seems fair, to the best of my first-hand but long-ago recollection.

Reservations aside (these may or may not include Alan’s trademark proofreader’s-nightmare typing, already familiar to fans), the booklet contains a lot of good stuff which deserves to be more widely known. To end on one more note of dissent, however: I can’t entirely agree that “The story of Joe Jacobs is a sad one” (p.5). Take it for all in all, there are grounds for hope and encouragement in his overcoming of difficulties, will to resist oppression and authoritarianism in all situations, receptivity to new ideas, and determination to remain his own man to the end.

Text from: https://radicalhistorynetwork.blogspot.com/2011/11/book-review-joe-jacobs-biography.html (the above text was slightly edited for Black Flag – see PDF of that issue.)