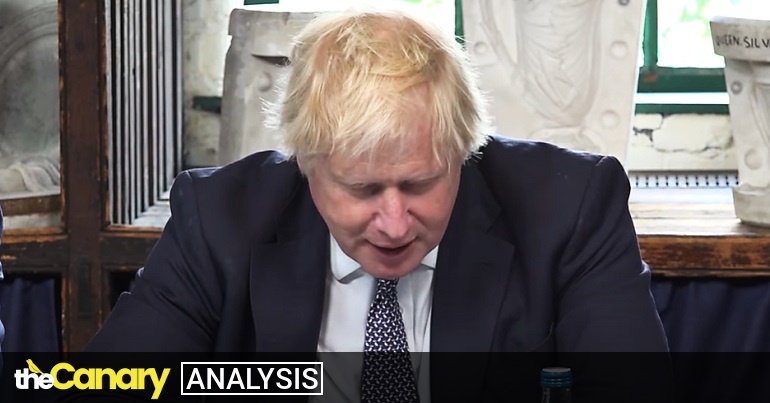 On 7 July a beleaguered Boris Johnson stood outside 10 Downing Street and grudgingly offered his resignation as prime minister. However, he made it clear he would remain in post until a successor is found.

The day before Johnson’s reluctant resignation announcement, he faced interrogation by the Commons Liaison Committee on a number of matters. Johnson was forced to admit under questioning to a possible major security lapse involving Russian oligarchs. Subsequent to that admission, a former senior MI6 Russia specialist has called for an investigation into the alleged security failure and its implications.

Yet this security failure was first reported some three years back, including by The Canary.

It was during the committee gathering that Johnson was asked if he had met with former KGB (Russian secret service) operative Alexander Lebedev – specifically on 28 April 2018. Johnson explained he had indeed met Lebedev on several occasions, including when he was foreign secretary. When pressed further on this, Johnson confirmed that the meeting on the date quoted had taken place in Italy without officials present:

Adviser passes note telling him to stop talking. Watch to the end. pic.twitter.com/uUF4fnD4KN

The venue for the meeting was the Italian villa of Lebedev’s son Evgeny, whom Johnson subsequently made a peer.

Investigative journalist John Sweeney claimed in a video that Johnson was a regular guest at the villa, both when he was mayor of London and when foreign secretary. Sweeney also claimed that the villa was regularly used as a venue for ‘bunga-bunga’ (sex) parties. Moreover, that MI6 was aware of these visits and regarded Johnson as a “security risk”. Also, on at least one of these visits Johnson left his Metropolitan police protection officers back in the UK:

After his stay on 28 March 2018, Johnson was spotted at the San Francesco d’Assisi airport waiting in the departure lounge to board a plane back to the UK. He was apparently more dishevelled than usual.

One person with knowledge of previous parties in Italy said Lebedev liked to invite people who would “create a spectacle by behaving in an outrageous way … There was always that bacchanalian aspect to those trips … it was all about having very important people reduced to doing very silly things.”

Since the Commons Liaison Committee interrogation of Johnson, Labour MP Yvette Cooper raised the matter in parliament. She queried whether Johnson’s stay at the villa could have put him in a “compromising position”:

Why have Ministers covered up this disgraceful breach of national security? My Qs to Govt. pic.twitter.com/oUjs2bebI9

Christopher Steele, the former head of MI6’s Russia Desk, also commented on Johnson’s admission to the committee, saying an investigation into the matter was needed:

As a matter of priority, we need to know the full details of Johnson’s relationship with the Lebedevs and especially what transpired at the meeting with Aleksandr Lebedev in Italy in 2018. This is an issue of real national security importance and a thread that must now be pulled.

In a radio interview Steele called for an “investigation by the secret services” into Johnson’s private meeting with Alexander Lebedev, adding that the meeting raised “significant issues of national security”:

But the idea that MI6 or MI5 will investigate this security failure by a still-serving prime minister – a Conservative one at that – is fanciful, to say the least. After all, their roles are to protect the established order.

In another tweet, posted a week before the Johnson resignation, Steele made it clear that in his view there was definite interference by Russians on the Brexit vote. Moreover, he added that this information was provided to the Intelligence & Security Committee (ISC) for its long-delayed Russia Report:

On Brexit we had clear indications Russia did try to intervene, including with clandestine funding, to influence the vote.We shared this info with Parliament’s ISC for their Russia report. Although I doubt it was enough to swing the vote, it has never been properly investigated.

As reported by The Canary, there were also allegations that pro-Brexit campaigns were hit by thousands of bot accounts run from a St Petersburg-based ‘troll farm’. Indeed, a study by Swansea University and the University of California, Berkeley, identified Twitter accounts in Russia that “posted 45,000 tweets about Brexit within the space of 48 hours during last year’s [2016] referendum”.

Yet despite the intelligence Steele provided to the ISC, and reports on Russian bots and donations by oligarchs in The Canary and elsewhere, the Russia Report neglected to report any of this. In other words, as shown in detail by The Canary, there was a cover-up.

In November 2019, The Canary reported that a US House intelligence committee hearing raised questions about Johnson’s links to a “Russian agent”. Then there’s the matter of gifts of money to the Tories. In July 2020, The Canary reported on some of the many donations by Russia-linked oligarchs to the Conservative Party.

It’s also believed that Russian Embassy senior diplomat Sergey Nalobin arranged the launch of the Conservative Friends of Russia (later renamed the Westminster Russia Forum). Nalobin, whose father also worked for the KGB, was subsequently ‘expelled‘ from the UK.

In November 2019, The Canary reported on a claim by Reuters that a “senior Conservative Party member” alleged Ukrainian born oligarch Alexander Temerko was “very much behind the attempt to oust” Theresa May as prime minister. In short, Reuters suggested there was a coup led by “Temerko’s allies” who “are at the helm of Johnson’s campaign”. This reportedly included former defence secretary Gavin Williamson, political strategist Lynton Crosby, and “a group of East European businessmen”.

Temerko, incidentally, reportedly made his fortune in the sale of arms to Russian Defence. He is known to be a good friend of Johnson and financed the Conservative Party by more than £1m.

Regarding Steele’s call for an investigation, it’s difficult to take that seriously given his links to the propaganda outfit the Integrity Initiative that, for example, ran smears against Jeremy Corbyn. Nevertheless, the implication of Johnson’s admission to the 2018 meeting with the Lebedevs and the circumstances surrounding it, is that a security lapse occurred. Nothing is known about what happened at the villa, or who else was there.

However, this scandal is only one of many that have plagued the Johnson-led government. He has led a government of sleaze, corruption, and outright deceit. From PartyGate, to the circumstances regarding payment during Johnson’s affair with Jennifer Arcuri, to his alleged attempt to provide a lucrative job to his then girlfriend Carrie Symonds, to the PPE contracts scandal, and many more.

Or as Led By Donkeys puts it:

As for the recent government reshuffle, it’s a case of same shit, slightly different toilet.