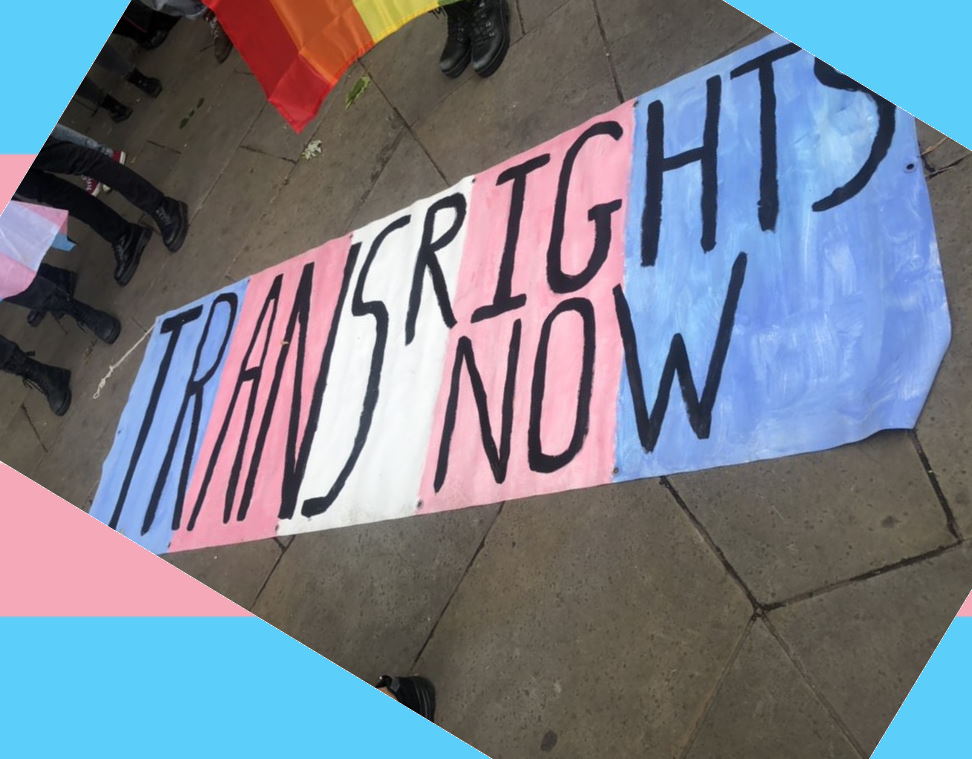 Yesterday Bristolians from many different groups and backgrounds gathered together in response to a call under the slogan #BristolAgainstHate. The call was to oppose known transphobe, islamophobe, and all round bigot Posie Parker. She planned to visit Bristol, with her fan base, in order to ‘reclaim space’ to be as transphobic as possible in public.
Breaking with anarchist stereotypes we arrived early to the 12–noon anti-transphobia deonstration on College Green. Around twenty others had done likewise and stood around us as we set up a stall and gazebo. Bristol AFed, along with other friends, and a few strangers all contributed to one of our favourite stalls in a while. Alongside the usual flyers, stickers and bust cards (from Bristol Defendant Solidarity), we had dozens of wraps, two huge cakes, bottled water, covid-masks, hand sanitizer, sun block, sun glasses, extra flags, extra placards, spare seats, and the door code to a near-by coffee shop’s toilet.
This stall would later become a sanctuary of sorts for those looking to get away from the noise and tension of the main demonstration. It also meant protesters were able to refuel before heading back to the crowd. The right wing tabloids seemed rather obsessed with our free cake, quoting our tweet about it. But we’re getting ahead of ourselves.

As we finished our set up, there were around forty people gathered for the #BristolAgainstHate demo, joined by a few journos, two cops, and a dozen or so of the transphobic crowd. Only a few feet seperated the opposing groups, but tensions were relatively low. They did spike  a bit when a drunk transphobic guy with the other demo shouted abusive things, but he settled down (with a little help from his friends). There has been a repeated assertation from many people who weren’t present on the day, but have oh-so-much to say about it on social media, that #BristolAgainstHate wanted to physically attack the transphobic demo. If that were true, we could’ve done so easily at this point, we out numbered them 4-1 with effectively no police presence.

Instead this early period was made up of chants, music, handing out of food and leaflets, and talking about transphobia with the very receptive people passing by. A couple of people who came to our stall turned out to be transphobes and didn’t seem at all scared for their safety. We only twigged that one of them wasn’t just a passer-by when she refused to eat any cake unless we told her whether it was made by a trans person or not. One of our members didn’t even notice the group stood away from us were our ‘opposition’ and was a little confused to the frosty reception they got while handing out ‘Bristol Says Trans Rights!’ flyers.

It was well past 1pm when Posie Parker and her entourage appeared at one of the far corners of College Green. By this point the crowd had grown to 60 of her fans, and well over double that in opposition to her, with the police presence now up to several vehicles and a dozen officers. A few of us hung back by the stall, it was by far the busiest spot so great for leafleting, whereas Posie and Co would’ve been relatively isolated – even if there hadn’t been been a large crowd of counter-demonstrators.

As Posie began her usual transphobic ranting, the ever increasing (it peaked at 150-200) counter demo chanted, sung, blew kazoos, played music, and generally made a racket. Massive props to the group who managed a Kazoo rendition of The Imperial March. Posie did have an impressive PA system however, and her words could be made out by the crowd close around her. You’d have thought this wouldn’t matter to her travelling fan base either way, after all, they‘ve heard it all before dozens of times. You’d have been wrong though, they were PISSED OFF. They yelled back, calling us ‘tr*****s’ and ‘fa****s’. Then a group of them jumped forwards, led by someone who we were later told was similarlly aggressive at prior demos.

They pushed into us (even their video shows people with trans flags falling after being pushed). One of them even grabbed a child and pushed them to the ground. Almost immediately the police ran in. Unsuprisingly from the perspective of a cynical veteran like myself, they joined the non–uniformed bigots in pushing the counter demonstrators.

However, the counter demonstrators soon regained their ground and stood firm, with the police and the more agressive transphobes forming a line around the transphobe crowd. This line included men, despite the transphobes insistence to the press that all of them were women. Maybe these were the ex-marines that they said they was bringing on social media?

The police would later claim there were no physical altercations at all. I guess that fits their narrative better than admitting they joined in with one.

This stalemate largely continued for the next couple of hours. There was a genuine risk of being driven to distraction by the repetitive speeches, with almost everyone in the crowd of bigots wanting to loudly agree with each other on the mic. This monotony was broken up by various actions from our crowd, like people flying the trans flag behind Posie, or starting very loud renditions of Smash Mouth and Oasis songs. The most notable break in proceedings was when the naked bike ride came through. Their timing was impeccable, right as Posie Parker was attempting to lecture everyone on the dangers of the wrong genitals in the wrong places, dozens of naked people of all genders cycled by to the sound of cheers and bike bells.

Eventually the transphobes had tired of attempting to listen to each other, and most drifted away towards Temple Meads Station. The rest, led by Posie Parker, took a slower walk through the centre. Escorted by a bubble of cops, and still surrounded by counter demonstrators they made their way to the Slug and Lettuce.

In a rather surreal turn of events more than 20 police covered all the entrances to the pub, as the counter demonstrators took the streets outside. At this point Posie Parker tweeted about ‘the children’ outside the pub. This is a recurring theme, as if pointing out that literal children – alongside adults, young and old – turned out to oppose your bigotry is some kind of ‘win’. That they know there are children present makes their acts of violence all the more concerning.

At this point it became clear that the transphobes had nothing planned beyond attempting to buy more drinks. This turned out to be a difficult task as the Slug and Lettuce cancelled their order and began to close. Smart move on their part, no one wants the negative PR of being the ‘home of transphobes’ a month before Bristol Pride. Not wanting anyone to be at risk, all the remaining counter demonstrators gathered (not an easy feat) to leave together.

Our exit took the form of a march through the streets. One transphobic man leaving a pub grabbed a chair and threw it a young member of our demo. Luckily he missed, and a number of people in Black Bloc quickly put themselves in between him and the rest of the crowd. Him and his companion quickly retreated, and we all reformed to march back through the centre before dispersing.

It is never a postive experience having reactionaries come to your city in an attempt to organise, recruit, make sales and spread hate. That said, there were a lot of positives to take from the day. Once again, with little notice and only an anonymous call to action, Bristol’s radical communities put up an effective and well organised resistance. It wasn’t perfect, and there is much we hope will be better in future, but it was good. We had ourselves, the IWW Union, Queer Student Groups, Action Medics, Bristol Feminist Collective, Legal Observers, three different climate groups, antifascists, other leftists, all working together. We were also had support from a half dozen or so out of town comrades like NEAG, and Manchester Trans Rise Up, plus a mix of skaters, emo kids, and passers by joining in. I feel we’ve all come away stronger, having forged new links, made new contacts, and put our message of trans acceptance to thousands of fellow Bristolians.

There is plenty more to be said about Sunday, and about the movements behind it, but that will wait until after we’ve all had a chance to discuss, debrief, and recover. As always, solidarity to our trans comrades, both inside and outside AFed.

We will stand with you when it matters.