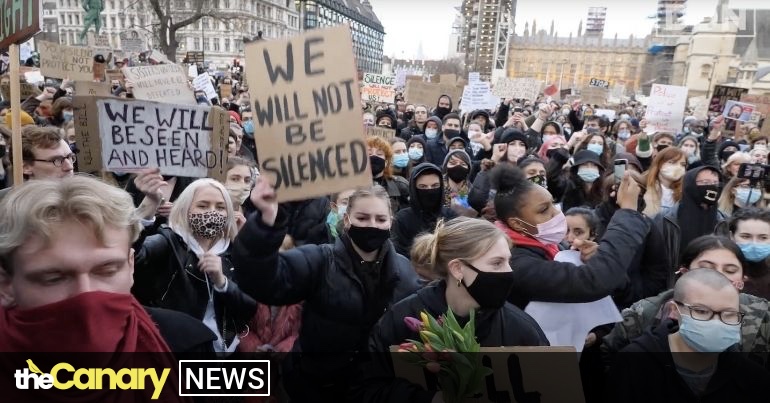 People in Bristol are planning to demonstrate on Saturday 6 August, calling for charges to be dropped against those who rose up last year against the Police, Crime, Sentencing and Courts Act. The protesters are also demanding freedom for those already imprisoned.

The march starts at St Peter’s Church in Bristol’s Castle Park at 2pm.

The Network for Police Monitoring tweeted:

Stand with #KillTheBill protesters in Bristol on Saturday 6 August.

Last year, at least 82 people were arrested following a months of protests in Bristol against the draconian policing bill.

The bill became law earlier this year, and will have a dramatic impact on public demonstrations, as well as criminalising the lives of Gypsy, Roma and Traveller communities and increasing the length of time some people spend in prison.

Over 50 people were charged with riot – the most serious public order charge in English law – after a confrontation between police and protesters on 21 March 2021 outside Bristol’s Bridewell Police station. By the end of the evening, police cars had been set on fire and the police station windows had been caved in.

The uprising outside Bridewell came just weeks after the abduction, rape and murder of Sarah Everard by a serving Metropolitan police officer.

Prisoners have been handed sentences of up to 14 years

Those charged with riot face up to ten years in prison. According to Bristol Anti-Repression Campaign:

So far, 20 people have been sentenced to prison time for their role in Bristol’s 21st March 2021 uprising against police violence, that began outside Bridewell Police station. Five more people will be sentenced this summer, and at least 20 people are still awaiting trial. Two others have been found not guilty of riot.

Most of the sentences have been for between three and six years, but Ryan Roberts was given a massive 14 year prison sentence last year. We are full of anger at the government which is enacting laws to take away our freedom, and at the police who use violence to brutalise those who speak out.

‘The police are the enemy of the people’

A leaflet for the coalition of groups organising the demonstration reads:

For the past years we have watched friends and loved ones get taken into the criminal injustice system, locked for years behind walls of steel, stone and barbed wire. For what? for fighting, for resisting. For saying no. For not accepting the police beating their friends, or strangers, with shields and batons. For not accepting the state continuing to increase its power over already the most marginalised people. For refusing to allow the police to break our demonstration. “Who’s Streets?” – no really, Who’s are they? Or for simply fighting back on no other principle than that the police are the enemy of the people, the long arm of systematic racism, poverty and inequality.

The organisers are clear that they support everybody who has faced charges, no matter what they did to resist the police:

Some did very little, some did a lot. Some did nothing more than refuse to leave their friends whilst the police beat them.

All should be free!

Free the prisoners, drop the charges

The callout finishes with a demand to free the prisoners, and to organise to end the repression against the Kill the Bill defendants:

By standing with the prisoners and defendants we show that we are on the side of resistance, not repression. On the side of the people, not the state.

It is time to organise, Lets come together on the 6th August in support of those that fought against the state and its fascist legislation.