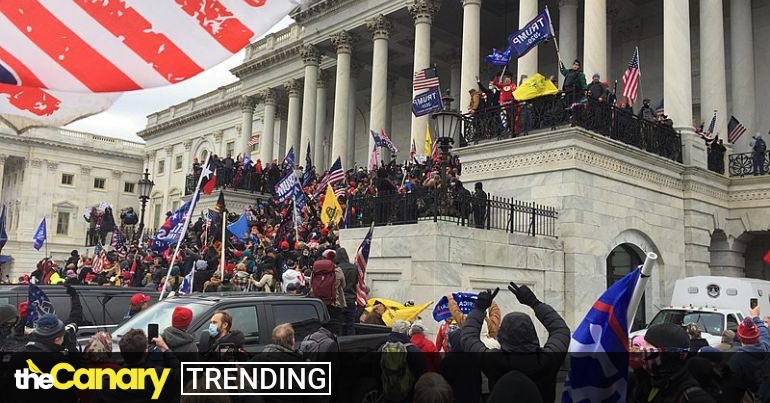 2020’s US presidential election was particularly volatile and ended in defeat for Donald Trump. It led to deadly riots in Washington DC on January 6th. The ‘insurrection’ on Capitol Hill saw Trump supporters turn violent. Government buildings were stormed, hundreds injured, and some killed.

Accusations have been exchanged ever since – including that Trump stirred his supporters into violence with false claims that the election had been stolen. And, that he effectively led the riots which caused such enormous damage.

And his own daughter Ivanka reportedly admitted to investigators that Trump knew perfectly well no electoral fraud had taken place.

Over a year later, the House committee hearing is underway to examine the details of the case. As the riots have been discussed by the committee, social media discussion has increased massively.

Horrifying details emerged from one police officer who claimed she had been slipping in blood as police tried to hold off far-right rioters:

While others are convinced that the Trump administration attacked US democracy from within:

They attacked us, and it was all orchestrated from inside the White House! #January6thHearings

Yet one historian lamented the fact that the US public had not understood the true nature of the January 6th riots:

I don’t know what’s worse. The events of January 6, 2021 or the fact that a prime-time Congressional hearing is needed to convince a large percentage of Americans that an attempted insurrection led by a president matters. #January6thHearings

Some applauded the way the congressional committee laid out the case against Trump and his supporters:

This is really well done. Step by step. How they attacked our Capitol…all while waving Trump flags. #January6thHearings

Another Twitter user said Trump and his backers had been deranged in their actions that day:

There were two sets of characters on Jan 6: Those around the President who knew better but were too fearful to act, and those deranged true believers who were willing to tear down our Constitution and our democracy. Trump was at the heart of the latter group.#January6thHearings

The hearing showed a video report on the riots. The images led one social media user to comment on the blight of hard-right religious nationalism:

This final image from the #January6thHearings opening video is the culmination of white evangelicalism’s unholy union with Donald Trump—a violent insurrection led by people waving a Christian flag.

Christian nationalism is evil, deadly, and antithetical to the way of Jesus. pic.twitter.com/1eK7Un0F0N

One commentator emphasised that many Republican congress members had backed Trump’s claims of electoral fraud in 2021. This is despite there being no evidence of fraud at the time or since:

Just a reminder that 147 different Republican members of Congress voted on January 6 to reject duly certified Biden electors from Arizona and Pennsylvania — even though there was no dueling slate of electors from either state and no viable evidence of fraud. This is on them, too.

For some who watched the first days of the hearings, the only just outcome would be prison sentences, including for Trump himself:

Salutes to everyone that saw #January6thHearings and are maintaining their composure today. I’m holding up all of us because babeee – I need a whole lot of folks to go down for this, to include Trump.

But not everyone agreed. It seems Trump’s impressionable far-right base are still alive and kicking.

For example, a senior fellow at media watchdog Media Matters pointed out that Fox were trying to stop viewers switching to the hearing:

Carlson went the whole hour without a break, Fox is desperate to keep its viewers from switching to another channel and seeing the hearing in real time. https://t.co/XuQZfelPol

We’re not playing along with the January 6 show trial hearing. The whole thing is insulting. They are lying, and we’re not going to help them do it. https://t.co/GT9NLRN9D2 pic.twitter.com/PDT9g758br

Whatever the outcomes of the hearings, Donald Trump seems likely to come out of them very badly. Whether or not he ends up in jail is another question. And it seems unlikely that the committee will unify the US and bring hardcore Trump supporters in from the cold.