The Department for Work and Pensions (DWP) just admitted that it has not bothered to check if there is a serious flaw with Universal Credit. It has previously denied that the social security payment causes increased crime – contrary to a recent study. But now, the department has admitted it’s not even bothered to look itself to see if there is a link.

whether… [it] has made an assessment of the potential relationship between the rollout of Universal Credit and increasing trends in the level of crime.

No such assessment has been made.

But we know that there is a link between Universal Credit and rising crime rates – a study looked into this, and the results were damning.

In June 2022, researchers Matteo Tiratelli, Ben Bradford, and Julia Yesberg looked into how crime rates had changed since the DWP rolled out Universal Credit. This was the first proper piece of published research on the topic. They looked at the issue on a local level, tracking what effect an increase in Universal Credit claimants had on local crime rates. They did this between January 2013 and June 2018 using monthly data – and they found a direct link.

In short, Tiratelli, Bradford and Yesberg found that the longer a local area had Universal Credit, the larger the increase in the crime rate was. 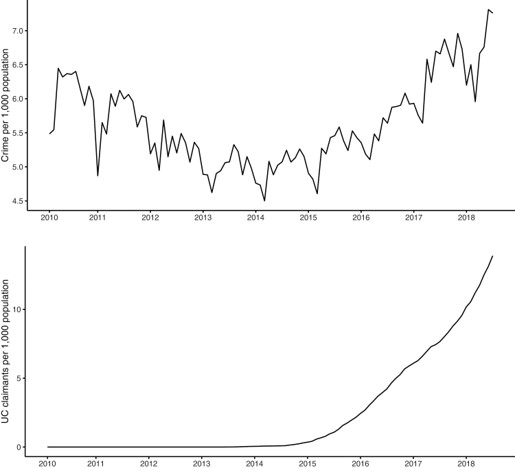 Then, what the researchers also did was predict what might have happened after 2018. They said that the data:

suggests that the full implementation of UC would nearly double the total crime rate in a given area (see models 7 and 8). As UC has yet to fully replace the legacy social security system anywhere in the United Kingdom, this obviously represents an extrapolation outside of the range of our data. But for each ten-percentage point increase in the ratio of UC to legacy claimants, our models predict an additional 0.4–0.5 total crimes per 1,000 people per month.

Crucially, the researchers also noted that:

By 2018, there were 14 people claiming UC per 1,000 in each… [local area], while the crime rate had risen by 2.2 additional crimes per 1,000 people since 2013. Our models suggests that the introduction of UC might have accounted for 18 per cent of that increase.

However, despite this groundbreaking evidence, the DWP has not even bothered to look into it.

The DWP previously told the Mirror:

There is no evidence Universal Credit causes crime. The report’s authors themselves acknowledge it is impossible to prove the cause of criminal behaviour from a single, observational study.

In his answer to Onwurah, Rutley repeated what the DWP also told the Mirror, saying:

Universal Credit provides a strong financial safety net: it is more generous overall than the old system and makes it easier for people to claim support they are entitled to.

But the study researchers disagreed.

The effects seem to be quite broad: it’s not just about survival crime where people are pushed to breaking point because of poverty and they resort to property crime to supplement their income.

It also seems to be the strain, stress in general this big restriction on how generous the social security system is has led to people becoming stressed in all different areas of their life.

The DWP saying there isn’t an issue is a major issue in itself. Other studies have shown that delaying or removing social security from people increases the chances they’ll commit crime. Of course, the DWP and the government couldn’t possibly admit that years of social security cuts coupled with the disastrous roll-out of Universal Credit has left people with no choice but to turn to crime. So, better to just pretend the issue doesn’t exist.

Featured image via the Guardian – YouTube, Paisley Scotland – Flickr, cropped to 250×83 under licence CC BY 2.0, and Wikimedia