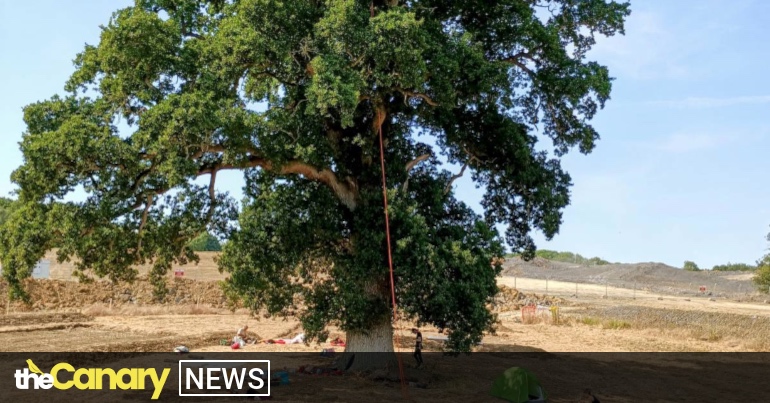 Eco-defenders in Somerset are occupying an ancient oak, to save it from a National Highways road expansion.

The Queen Camel oak near Sparkbrook is being threatened by plans to build a new slip road off the A303.

Indra Donfrancesco – the deputy mayor of Glastonbury, and one of the people who have occupied the area to protect the tree – recorded this video explaining her motivations:

This tree behind me is in the way of this works happening. So that’s why we’re here, that’s why we’ve made camp, we’re up the trees. We’ve got tree hammocks up there, and we will be here until either Highways England or the contractors see sense, and […] know that this tree is not coming down.

We are occupying to highlight that the Gov is spending 6.1 billion on road projects which will increase carbon emissions whilst a 78% cut in emissions by 2035 is written into law.

The tree-sitters told us that a court failed to protect the tree last week, but they were planning to appeal to the High Court.

“We cannot afford to lose one more tree”

I have been camping underneath the Queen Camel oak this past week, and campaigning to keep it safe from a slip-road. I’m here because there are too many trees that are disappearing in the world. In our country we have the worst canopy cover in Europe. We are in a climate emergency, we cannot afford one more tree. This is a healthy 450-year-old plus oak tree

I am here to give voice to this tree, to tell its story of why it is more important to us than a road. In this time of climate emergency we cannot afford to lose one more tree

Julian Hight submitted a complaint to National Highways which points out that the Queen Camel oak was recorded on the first ever Ordinance Survey maps, made 100-150 years ago, but the tree is thought to be much older than that. This makes the Queen Camel oak a ‘veteran tree’.

veteran oak in particular, provide more habitat that any other native tree, supporting over 2,300 different species, 320 of them are found nowhere else. veteran trees are biodiversity hotspots.

Supporters on Twitter called for the ancient oak to be spared:

Save the Queen Camel Oak
A healthy veteran oak is threatened by National Highways to be felled as part of a road widening scheme on the A303.

Meanwhile the oak has been occupied for the tree’s protectionhttps://t.co/iUxRyJV5Nkhttps://t.co/C8IH3eozgI@earthfirst_uk

Road builders are keen to cut down 600-year-old Oak in Somerset.https://t.co/1TPDLe0owG

If you want to get involved in saving the ancient queen camel oak tree but can’t make it down :

Make a complaint, like being complicit in biodiversity destruction https://t.co/iWChT8WpTp

“We all need to make a last stand for nature”

Conservationist and TV presenter Chris Packham also joined the calls to save the tree:

Brave protesters are peacefully camped in this beautiful ancient oak threatened by roadbuilding . They are fundraising for an injunction . We all need to make a last stand for nature – please give whatever you can afford https://t.co/3O3aLV7vAm #savethecamelqueen @XRebellionUK

Another of the tree-sitters – who preferred to remain anonymous – told The Canary:

I’m one of the activists who have been living up this tree for nearly two weeks now. We’ve made four different nests out of netting with pop-up tents on them, we’ve got a solar panel for charging, and we’ve been spending some really glorious nights looking at the stars from the top of an oak tree, it’s nice. There’s bats in it, evidence that squirrels were here but obviously they’ve moved out due to the construction. There’s owls here and lots of buzzards that nest in trees like this, as well as kestrels and sparrowhawks. There’s loads and loads of wildlife living off this massive veteran tree, and we just think that it really needs saving.

“A huge loss of biodiversity”

National Highways has previously estimated that the oak is 400-450 years old, but maintains that it is not subject to a protection order. We contacted the organisation to ask if it intended to change its plans in order to save the ancient tree. A spokesperson replied:

We respect the right to protest and will work with police and all relevant authorities, and those protesting, to ensure everyone is safe.

We take our environmental responsibilities very seriously and are one of the largest tree planting organisations in the UK, with plans to plant an extra 3 million trees by 2030. We only cut back or fell trees where it is essential to keep people safe, protect the environment or where it is necessary to allow us to improve journeys.

Where we plan to remove old trees on the A303 Sparkford scheme, we have made sure to investigate other possibilities to see if we can avoid removal. Sadly, that was not possible on this occasion. We continue to work with ecologists and other specialists to make sure our environmental mitigations are as thorough and beneficial as possible.

But as the tree-sitter highlighted:

The council and the Highways England – who bought this land 30 years ago – always swore that they’d protect it to the farmer who they bought the land off of. Recently they have changed their tact and said that it needs to come down because its going to be on a piece of banking between the main A303 expansion and a sliproad, which is a private road to a private school – which already has perfectly good access to the existing Sparkford roundabout.

So we just feel that it doesn’t need to come down, it’s a huge loss of biodiversity. So we’re here to do what we can to protect it.

The Queen Camel campaigners have vowed to protect the oak. They are raising funds for camp equipment, and towards an injunction to prevent the felling of the tree. You can support them by donating to their crowdfunder.

Featured image via the tree-sitters, with their permission