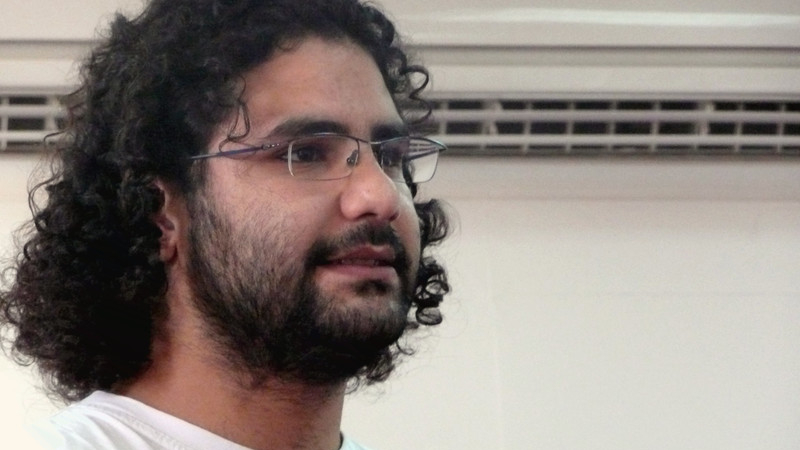 Tomorrow marks 1,000 days of unjust detention for prominent blogger and activist Alaa Abdel Fattah, an Egyptian-British national, and his lawyer Mohamed Baker, who are both imprisoned solely for the peaceful exercise of their human rights. Amnesty International is urging the Egyptian authorities to release them immediately and unconditionally, and also calls on the UK authorities to use all means at their disposal to visit Alaa Abdel Fattah in prison and secure his release.

Alaa Abdel Fattah (pictured) and his lawyer Mohamed Baker were arrested in September 2019. They were sentenced in December 2021 by Egypt’s Emergency State Security Court to five and four years in prison respectively for “spreading false news”. Since 2 April 2022, Alaa Abdel Fattah has been on hunger strike in protest at his unjust detention, inhumane prison conditions, and the prison authorities’ refusal to grant him consular access.

Egyptian authorities know Alaa Abdel Fattah is a symbol of resistance and freedom in Egypt, and his continued imprisonment sends a chilling message to other activists.

“Alaa Abdel Fattah has now endured 1,000 days in detention, where prison and security officials have subjected him to a catalogue of human rights violations including torture and other ill-treatment, in reprisal for his prominent role in the 2011 revolution. The Egyptian authorities know that Alaa is a symbol of resistance and freedom in Egypt and the wider region, and his continued unjust imprisonment sends a chilling message to other activists, and casts a shadow over preparations for the global UN climate conference taking place in Egypt later this year” said Amna Guellali, Amnesty International’s Deputy Director for the Middle East and North Africa.

“After more than 80 days of hunger strike, Alaa Abdel Fattah’s situation is now entering a critical phase, both psychologically and physically. The Egyptian authorities are responsible for Alaa Abdel Fattah’s life and they must immediately release him.”

The National Council for Human Rights (NCHR), the national human rights institution in Egypt, did not see Alaa Abdel Fattah during their visit to Wadi el-Natroun prison, where he has been held since 18 May. They quoted prison officials’ claims that he was not on hunger strike, that he is receiving daily meals and that his ‘vital signs are normal’ based on medical reports from the prison authorities.

“When I visited him [Alaa] on the 12th June and saw how much weight he lost and how fragile he looked, I decided that if the Egyptian authorities are working hard on hiding the fact that he is on hunger strike, I am going to join him and use my body as a portal to convey and mirror his hunger strike.”

On 9 June, Alaa Abdel Fattah’s lawyer Khaled Ali posted on Facebook that he had been denied access to his client, despite having official permission to visit him.

While Egyptian authorities remain set on silencing dissent and locking up activists, the UK government must ramp up the pressure.

Following increased international scrutiny of their human rights record, Egyptian authorities have in recent months released tens of unjustly jailed men and women, and in April 2022 they reactivated the Presidential Pardons Committee to review prisoner cases. Yet the Committee’s work has been controlled by security forces, and marked by a lack of transparency and exclusion of certain prisoners of conscience and others held for political reasons

According to an article by independent news site Mada Masr, which is blocked in Egypt, an anonymous source close to the committee said that security agencies will not allow the release of Alaa Abdel Fattah.

On 21 June, British Foreign Secretary Liz Truss, publicly vowed to intervene to help free him, stating that British authorities are “working very hard to secure his release”, and said she would raise his case during the upcoming visit of Egyptian Foreign Minister Sameh Shoukry.

“While Egyptian authorities remain set on silencing dissent and locking up activists, the UK government must ramp up the pressure and should publicly and privately call for his release, and in the meantime secure a consular visit,” said Amna Guellali.

“I am carrying my brother’s hunger strike with my body, hoping that the British officials I meet recognize the urgency of his situation and intervene on his behalf with the needed urgency and strength.”

Alaa Abdel Fattah recently obtained British citizenship in 2021 through his British-born mother.  His family later announced it in April 2022. He requested a consular visit from UK officials in December 2021, but the Egyptian authorities have failed to respond. He has filed several complaints of torture and other ill-treatment, including being beaten while handcuffed for requesting outdoor exercise.

Mohamed Baker is a human rights lawyer and director of the Egyptian human rights organization Adalah Center for Rights and Freedoms, which he founded in 2014. He was convicted by an Emergency Court on 20 December 2021 on bogus “charges of spreading false news” relating to his social media posts.

Alaa Abdel Fattah has been on hunger strike – consuming only water and salt – since 2 April 2022. His family are concerned for his life as his health deteriorates. His sister, Mona Seif, who is also an activist, began a hunger strike more than two weeks ago.

In recent months, scores of unjustly detained individuals have been released after the reactivation of the Presidential Pardons Committee, but thousands more continue to languish behind bars and arbitrary arrests continue unabated.