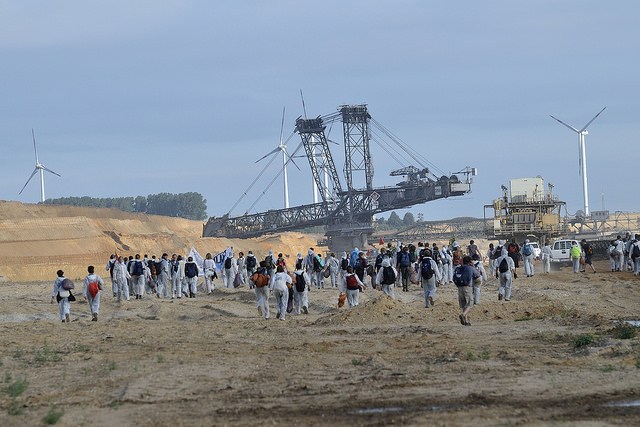 On the 15th of August, around 1500 people took part in a mass act of civil disobedience by occupying the Garzweiler open cast coal mine in the Rhineland, Germany. The mines in this area are the single biggest point source of CO2 in Europe, which as we all know are contributing to catastrophic climate change. These great scars cut into the Earth by huge diggers that look as if they came straight out of a dystopian film. They are destroying ancient forests and have already displaced 35,000 people, with a further 7,000 to be evicted to make way for destruction in the name of profit.

The mass action, called Ende Gelände, which echoing the slogan Ya Basta!, means ‘here and no further’, was the culmination of a ten day climate camp in the area. This was the biggest camp yet and was run in conjunction with a Degrowth Summer School, which brought together activists and academics to discuss the underlying issues behind the problems of climate change. This meant that the focus was not solely on reducing CO2 emissions but on critiques and alternatives to capitalism, never ending growth and to some extent hierarchy.

The climate camps, which have been running for several years, are a part of an ongoing resistance to the mining in the region. In the Hambach Forest, trees have been occupied long term and numerous actions have been taking place, including acts of sabotage to inflict financial damage on RWE who run the mine in order to slow the destruction of the mine.

Much has already been written about the day of mass action, including moving accounts of the excitement and fears that people felt, who for many of which this was their first action. I can only reiterate what others have said: it was both at times an exhilarating and terrifying experience. The best forms of action, for me, are the ones where you go beyond boundaries that you thought couldn’t be crossed and new possibilities are opened on the other side. In this case, this came from engaging in open confrontation with the police. Despite the baton charges, pepper spray and at times outright brutality, we repeatedly broke through their lines and reached our goal. In out witting and out manoeuvring the violence of the state, we continue to kill the cops in our head and realise that our power is much greater than we imagined previously.

This process was surely a radicalising one for so many people. Feeling our collective power and going beyond personal limits for a cause that you believe in, as well as seeing how the state and corporations collaborate to prevent such acts from happening can only leave you geared up and ready for more. What’s more, most people got away with it completely. Though in Germany you are obliged to carry ID, hundreds of people refused to cooperate with police, which meant they were unable to process us and forced to release us all.

The fact that there were so many of us had many benefits, especially that it was so open to new people to participate and also that we could clog up police resources so effectively. However, these forms of action also have their drawbacks, which I feel it is important that we reflect upon in our continued struggles against climate change and capitalism.

Firstly, we should ask how effective were our actions and was it worth the cost? If our aim was to shut the mine, we did indeed mostly achieve this. But then, did we need 1,500 people for this to happen? Along side the mass action of Ende Gelände, a number of smaller autonomous actions have been taking place in the past couple of weeks, as well as part of longer campaigns. Diggers, train lines and conveyor belts have all been occupied by just a few people and have had similar impacts in terms of shutting down the mine. All of this is hitting the corporation running the mine in the pocket, as currently the share prices for RWE are at their lowest for 25 years.

Though for many the mass action was a radicalising one, for others it may have been traumatic and could have long term health implications. The mass gave us a feeling of safety and strength, but each time we pushed through a police line, we experienced pain and brutality and our numbers dropped. Somewhat like a war of attrition, we could be seen to be cannon fodder, with individuals sacrificed at each stage for the good of the whole. Was this necessary though, if just a few people can have similar impacts?

Secondly, quick decision making is problematic in large groups. A great degree of trust was put in the hands of the organisers to ensure that the plan was well thought through. I can’t criticise the organisers for their secrecy around the plan. This isn’t hierarchical organising, it’s entirely necessary to have good security culture for an action to be successful. When parts of that plan weren’t going as they were meant to, however, and there was a need to change the plan or there were opportunities for smaller groups to act autonomously, these weren’t as readily jumped on as they could have been.

At one point, for example, I found myself in a group of around 10 or so people who had just escaped one kettle and managed to join up with another bloc who were entering the mine. Rather than changing course, or each affinity group making their own decision, the whole bloc walked straight into the kettle that we just escaped from. Though we kept a large number of police busy for a while, had we acted autonomously we could have had a greater effect by dispersing, occupying different areas of the mine or even escaping the mine to regroup and rethink.

In such situations it is vital that we work in affinity groups based on a high degree of trust and respect, as well as not always relying on consensus to make decisions. In one workshop it was suggested that we act like ‘pirates’ where snap decisions are made by a pre-agreed leader, but that this position is only for specific times and to be dissolved as soon as possible to prevent hierarchies from forming.

Beyond this, mass itself can be highly problematic. In appealing for unity, we can lose a great source of strength: diversity. Diversity of ideas, feelings, perspectives, tactics and strategies. Throughout the climate camp there were murmurs of discontent surrounding the ‘action consensus’ regarding non-violence, a sense of lack of solidarity for political prisoners and the sources of funding from political parties and NGOs. When we seek mass, discontent needs to be suppressed for the sake of the correct, media friendly narrative (which is a means to achieving greater mass). Mass also requires leaders, such as 350.org, a major funder of Ende Gelände, who say they “are building power for the climate movement in the lead up to climate negotiations in Paris later this year and beyond”. When organisations such as these attempt to create and lead a movement, there is a great risk of losing much in the name of unity.

More than mass: Autonomy and Solidarity

In our resistance and struggles there is space for mass actions such as Ende Gelände. But there is also a wide open space for other strategies and tactics. Ende Gelände has inspired and radicalised a huge number of people. Imagine what could happen if those people felt that they had the power and confidence to act of their own accord, rather than relying on the next mass orchestrated action.

This process begins with finding groups of affinity, people who you can work with and trust who share a desire to fight for something better than we have now. Hopefully, many such people found each other in the mine, supporting each other as we battled cops.

On top of this, we need confidence and tools to know how to act. This has been one of the great strengths of the Reclaim the Power camps in the UK. Through the process of ‘activist speed dating’ affinity groups are formed and given missions to carry out. They are not however, told how to carry their missions out, and therefore, whilst having a lot of support, they have a large degree to autonomy of how to carry these missions out. Subsequently, with the confidence gained from this process, many members of these affinity groups have gone on to carry out their own, sometimes high profile and high impact, actions. This is exactly the kind of empowering process that we need to continue to support in our resistance efforts.

In calling for a greater use of autonomous actions carried out by small affinity groups, this is in no way a call for a vanguard of militant self-proclaimed activists to lead the way to liberation. It is in fact the opposite. It is a call for each of us to trust in ourselves and our friends, to take power into our own hands and act according to our values and desires. We can all take action, in what ever form we feel appropriate, without waiting for the mass to be called upon from above. Further, when we feel the intensity and excitement of swarms of large numbers of people is necessary or strategic in our actions, then we can act more effectively based on our networks of affinity and trust.

Additionally, in recognising the need for diversity, we can also share more in terms of solidarity. We can understand that we don’t all share the same critiques, analysis or strategies, but still support one another in our struggles where they come together in a shared desire for better worlds than the one that we have now.

Let us celebrate the successes of Ende Gelände! But let us also move beyond the appeals for mass. The struggles against coal, against climate chaos, against capitalism, growth, hierarchy and domination require more than mass. They require each of us to be able to find our own potential, our own strategies, allies and methods.

Down with coal! For ecologically and socially just worlds of our own making!

The Intellectual Foundations of the Black Consciousness Movement