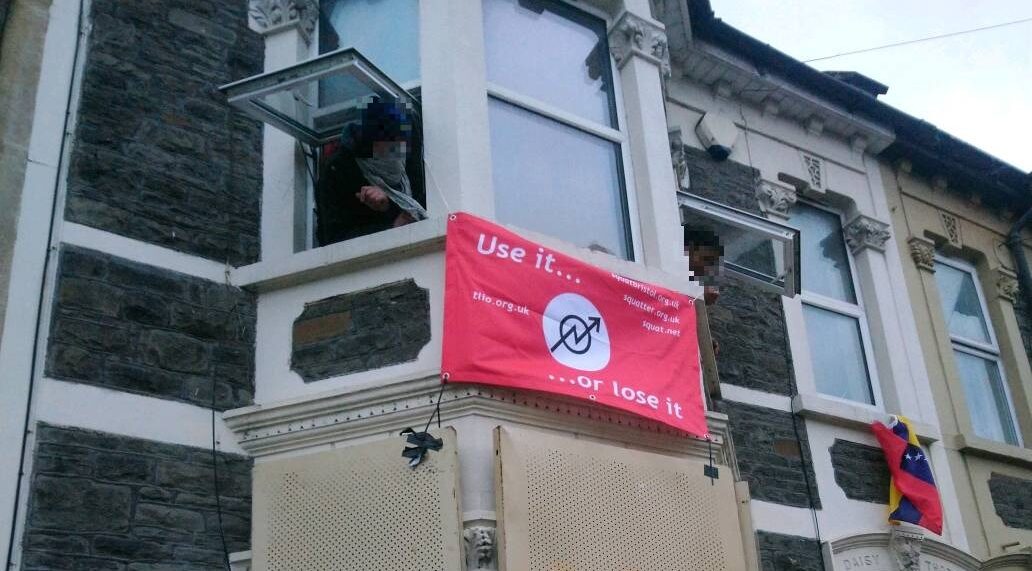 Activists from Bristol Housing Action Movement (BHAM) have occupied a house in Easton, Bristol, that had previously been under the control of Richard Long and Co Insolvency Practitioners and The National Eviction Team.

With the rising cost of living, the ongoing impact of a global pandemic, and numerous economic shocks, the last few years have been hard on all working class people. Ruth and her family have been hit even harder than most. Last month Ruth was dragged naked from her bed, and evicted from her own home. Forced to watch on as baliffs from the National Eviction Team trashed and boarded up her home, without any idea where she – or who two children who were at school – would stay that night.

Ruth was clear with us that the ultimate responsibility for her plight rests with Bristol City Council. She has been attempting to resolve a financial dispute with them for over a decade, making numerous payments to them as well as keeping up with her private mortgage. At some point it appears Bristol City Council stopped trying to reach an agreement and instead sold her debt to a private company. This company bought it with the aim of kicking Ruth’s family out of their home so they could sell it for what must be a massive profit.

However this is not a family – or city- that will take this kind of thing lying down. The intial eviction attracted (a sadly failed) attempt at resitance from the local community and the ACORN union, who had been aiding her attempts to finally resove the issues with Bristol City Council, and had gathered to resist baliffs last year. This time it was Bristol Housing Action Movement (BHAM) who stepped up. BHAM is a group of squatters, homeless people, and housing activists has been active in the city since 1984, and often been the reason for a roof over someones head.

On Saturday 26th of Novemeber BHAM, together with supporters from the local anarchist and squatting movements, entered Ruth’s former (and future!) home at 54 Robertson Road. Neighbours, friends of Ruth, and of course Ruth her herself arrived soon after – to see what was going on, and ultimately support the action.

The first task those inside attempted was rescuing the familys possessions, as there had been no opportunity given no to take anything from the house. Since Ruth has a damaged spine (something certainly not helped by being dragged down stairs by baliffs) top of the list was her medical devices and medication, and next was the possessions belonging to her children. However, once they were shown the state of the inside of the house, hope turned to anger and dismay.

“It looks like they’ve trashed everything they couldn’t steal” said J, a member of BHAM, leaning out of the window and sending pictures of what used to be bedrooms and a bathroom. “They’ve taken everything, my shoes, my clothes everything”, said one of Ruth’s children. Not something any mother wants to hear. The extent of the theft and damage soon became clear. Not only had baliffs seen fit to take medication and childrends clothes, they’d taken or smashed apart furniture, fittings, and even a bottle of rum she had been saving for a special occasion.

The occupiers, started the protest with a pro-squatting flag hung from the bedroom window, and those outside the house began to gather supplies for them to make it possible to stay in the property. Ruth had hoped there would be plenty left inside that they could use, but they found nothing but food that had been left to rot inside a fridge and freezer left unplugged by the baliffs. A rope was lowered down, and blankets, candles, bottled water, and foods hoisted up.

“The place has been left as an absolute tip. There was no reason for any of this beyond pure vindictiveness” said an occupier. “We want to make a clear point of protest, so we will make sure we always have people inside occupying the property, but it is far from livable” was the report from another member of BHAM. They also said they would spend their time cleaning up, in the hopes that the house could be made livable again in the future. Somewhere Ruth and her family could once again call home.

In the mean time Ruth hopes this will pressure Bristol City Council back to the negotiating table. Much like bankers during the great depression, the company hoping to make a quick buck at the expense of a family in Bristol, might realise they’ve taken on much more than they realised.

We’ll provide updates as the occupation continues, Ruth and the occupiers encourage people to head to the house to show their support and offer supplies to those inside – or even join them if you are feeling particularly hardy. Ruth also wants as much pressure to be put on the council as possible, so get in touch and tell them you #SupportRuth.