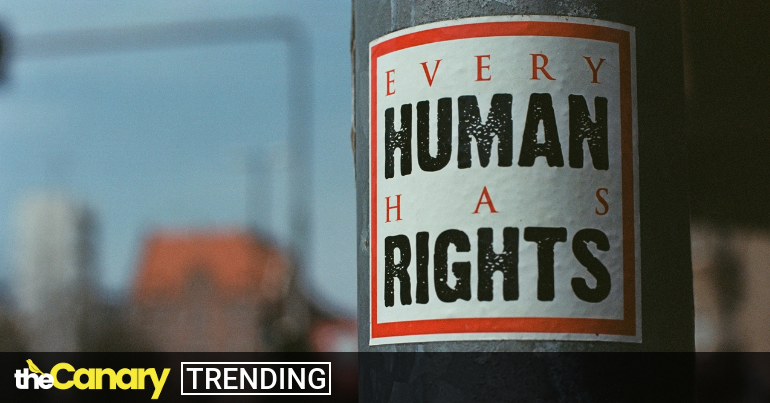 A new bill of rights is set to replace the Human Rights Act, if the Tories get their way. They’ve been threatening to do this for some time. But it looks like the temptation to reverse the European Court of Human Rights (ECHR) ruling on deportations to Rwanda was too much.

And there are plenty of reasons to be extremely worried.

What will the bill do?

In its press release, the government said that the bill would:

Well, we’re all sick of too many human rights claims, aren’t we? Er, no.

make clear that the UK Supreme Court is the ultimate judicial decision-maker on human rights issues and that the case law of the European Court of Human Rights does not always need to be followed by UK courts.

What could that be about, then? The government makes the connection itself, as it says the bill will:

Confirm that interim measures from the European Court of Human Rights under Rule 39, such as the one issued last week which prevented the removal flight to Rwanda, are not binding on UK courts.

It took a combination of protest and the intervention from the ECHR to stop the sickening policy to deport refugees to Rwanda – at least for now.

Amongst other things, it’s also going to:

Prevent courts from placing new costly obligations on public authorities to actively protect someone’s human rights and limit the circumstances in which current obligations apply, for example, police forces having to notify gang members of threats towards them from other gangs.

The entire point of human rights is that they apply to all humans. It doesn’t matter who you are, or what you’ve done, you have a right to be treated in a certain way. Human rights aren’t conditional. At least, they’re not supposed to be.

What’s the reaction been?

The Bill of Rights will strengthen our UK tradition of freedom whilst injecting a healthy dose of common sense into the system.

Yes, that’s the same Dominic Raab who is sketchy on UK geography, hasn’t read the Good Friday agreement, and can’t always remember the party line. Does that sound like someone who we can trust to have common sense?

The leader of the Green Party, Caroline Lucas, said:

Absolutely essential thread on Dominic Raab’s utterly destructive Bill of Rights – this Bill will drive a forklift truck through our fundamental human rights, and it must be defeated@libertyhq ? https://t.co/QRT5qZxMCY

Martha Spurrier, director of the human rights organisation Liberty, described one of the huge problems with the bill:

1. Enshrines the toxic idea of rights being conditional on good behaviour. Rights become gifts the state can take away if it deems you to be troublesome. This means impunity for rights abuses, particularly against people in prison, police custody, protestors

7. Commits to staying in the European Convention on Human Rights. But the Bill of Rights is a weaker, watered down imitation of the Convention, and Council of Europe may expel us for failing to protect rights. That would put us in the company of Russia.

A researcher at Human Rights Watch, Kartik Raj, said it was a “dark day” for the UK:

A dark day for the United Kingdom, as the government plans to rush through a Bill of Rights to replace the Human Rights Act and water down rights protections. https://t.co/MW30iBub1q

The ‘#RightsRemovalBill is a blatant power grab.

Ripping up the Human Rights Act means stripping us of our most powerful tool to challenge wrongs by UK govt & other public bodies.

This is not about tinkering with rights, it’s about removing them.https://t.co/FEIBPlGaCj

The charity Freedom from Torture warned the government to expect resistance:

?BREAKING?: The UK government has officially published its #RightsRemovalBill.

They’ve got another thing coming.

This bill is yet another instance of this government trampling over civil liberties. Its own press release shows that it’s targeting the most vulnerable people in society. The Tories don’t care about what it looks like – how else could they go ahead with wanting to withdraw us from international human rights standards? This is fascism, plain and simple.