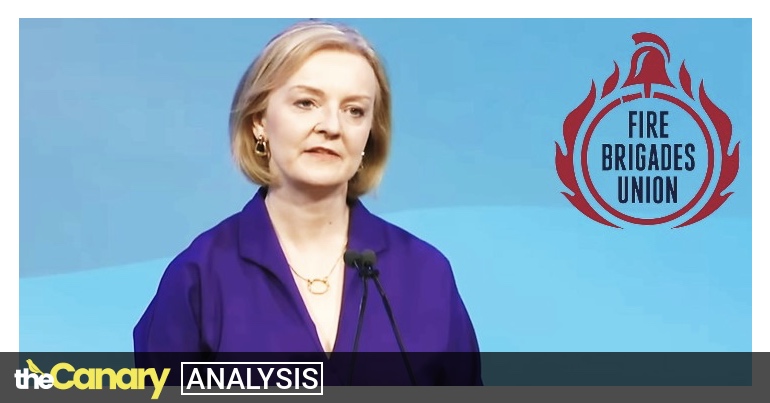 Another trade union has said that it is balloting its members over strike action – this time, it’s the Fire Brigades Union (FBU). It’s over their bosses’ shocking pay offer of just a 2% rise. The move means that new Tory PM Liz Truss will immediately face the power of working-class organising. So, is it time for a general strike?

The so-called ‘cost of living crisis’ has descended further into catastrophe. Inflation is currently at 10.1%, with some forecasts saying it could hit 18% in 2023. People are already spending less. In response, workers are striking all over the UK – including the Rail, Maritime and Transport Workers (RMT) union, the Communication Workers Union (CWU), the Criminal Bar Association (CBA) and Unite. Now, the FBU is set to vote on walking out – just as Truss becomes PM.

The Fire Brigades Union said in a press release that:

Firefighters and firefighter control staff are preparing for a ballot for strike action, following consultation in… [FBU] branches and a meeting of the union’s executive council on 2 September.

Any strike will be the first by the FBU in around ten years. As iNews reported:

Firefighters went on strike over pensions almost a decade ago and there was a lengthy strike over pay almost 20 years ago.

The union’s ballot comes after bosses offered workers a 2% pay rise in June. The website Planit says that as of February 2022, firefighters were paid:

So, the bosses proposed 2% pay rise will effectively be a pay cut – due to our staggering inflation rate.

Taking strike action is always a last resort. But our employers are increasingly leaving us with no choice. And there is huge anger among firefighters at falling pay.

Firefighters must be paid fairly: there is absolutely no question when it comes to this. It is the responsibility of fire service employers to provide decent pay offers and that has not happened.

The ball is now in the fire service employers’ court. It is not too late for them to make a much better pay offer for consideration by our members.

The FBU will hold the ballot in five weeks’ time. It will come after the Royal College of Nursing (RCN) ballots its members on strike action. So, this all begs the question: with so many workers striking, should unions declare a general strike? The answer surely is a resounding ‘yes’ – which will really give Truss something to think about.

Featured image via LBC – YouTube and the FBU – screengrab