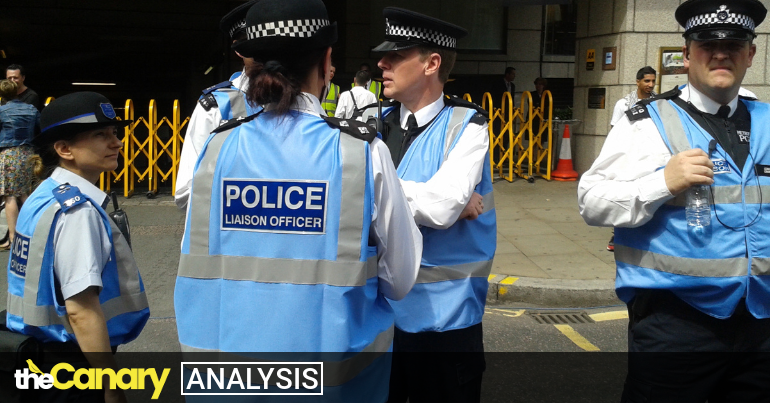 The Network for Police Monitoring (Netpol) has shown The Canary a training guide retrieved via a freedom of information (FOI) request. The document shows how the College of Policing goes about training police liaison officers (PLOs). Many people will have seen PLOs at protests, wearing their blue vests and often trying to chat to protesters.

Copwatching groups often warn that protesters shouldn’t speak to PLOs. Now, with the benefit of this FOI response, we can take a closer look at just why that is.

What are police liaison officers supposed to do?

Green & Black Cross, an organisation that trains legal observers, defines the role of PLOs as follows:

Police Liaison Officers (PLOs) are police officers sent to gather intelligence and spread unhelpful messages on protests. They are sometimes tasked with telling protesters information that can later be used to prosecute them.

PLOs try to portray themselves as friendly people associated with the police who want to chat with protesters. However, it’s important to remember that PLOs gather information that can be used to prosecute people.

Netpol’s access to the PLO training manual can give us an important insight into how PLOs are trained and what their objectives are. The training guide explains to PLOs that police officers have a duty to balance the right to assemble against the right to go about daily life:

A balance has to be struck, a compromise found that will accommodate the exercise of the right to protest within a framework of public order which enables ordinary citizens, who are not protesting to go about their business and pleasure without obstruction or inconvenience.

The right to assemble has become more contentious now that the Police, Crime, Sentencing, and Courts Act has been passed. Human rights organisation Liberty has said that the act “limits the freedom to protest“. And the Criminal Justice Alliance has warned that it will “deepen racial inequality.“. Whilst a balance has to be struck, it is very clear that the police are incapable of doing so.

The document goes on to state that:

The key value is that policing in the UK is by consent, and its core values should be:

Now, this refers to the general approach of policing in the UK. But when police officers took pictures with the bodies of Nicole Smallman and Bibaa Henry, was that “winning the consent of the public?” When serving police officer Wayne Couzens murdered Sarah Everard, was that the police being “approachable”? When the Metropolitan Police continue to have a remarkable number of failings, is that being “accountable”? When police strip searched a child, was that them using “minimal force”?

There are so many incidents to choose from to show that the police cannot be trusted. The claims of their core values have no bearing on the reality of how they treat people.

As Green & Black’s above comments show, this same suspicion can be turned on PLOs, who are also police officers. The specific roles of PLOs are said to be mediation, initiation, negotiation, communication, and sensing. Each of these tasks is geared towards reducing an escalation from either protesters or the police. Indeed, the document says:

By explaining to the demonstrators in detail why certain conditions for a demonstration have been made, and what might happen if they are broken, it might be possible for the demonstrators to accept the imposed restrictions and thereby decrease the risk of a confrontation.

While the police need to strategise as they attempt to control protests, that is not the concern of protesters. In fact, Green & Black Cross – along with copwatching groups – warn against speaking to PLOs:

There is no legal requirement to listen to them. We recommend people ignore them, walk away if approached and never take pieces of paper from PLOs.

PLOs are still normal police officers, who have powers of arrest and who will testify against you in court.

The FOI response shows that PLOs are trained to be seen as mediators and communicators, but that’s far from the truth.

Interestingly, the training guide explains how they have had to come up with new methods for what they call “intelligence gathering” for PLOs:

The use of Facebook especially to organise events months in advance and Twitter to run the event on a live time basis is commonplace. Gone are the days where we as police could focus on the activities of the protester using our traditional methods of intelligence gathering, as closed messaging is now utilised by groups.

Social media is really an untapped source of intelligence capability.

Dialogue is an essential part of the function of PLOs. The reason why copwatching groups so strongly advocate for not talking to the police becomes even clearer when we consider this part of the training manual:

As PLTs will often have had long term contact with protest groups, they will be better able to interpret the mood and conduct of the group than someone who is unfamiliar with the group. Similarly, they can interpret and explain the actions of the police to organisers in an attempt to prevent negative responses from the protest crowd.

Protesters are there to rally around a cause. Whilst they must obey the law, the right to assembly is a fundamental part of a functioning democracy. PLOs are able to go about their jobs, just as protesters are able to ignore them in order to avoid aiding their work.

Communication with protesters is fundamental to the very existence of PLOs. Their whole role, as shown above, focuses on getting protesters to give them information which they can relay to commanders who oversee policing at protests.

The guidance says that:

Others [protesters] may make it extremely difficult to contact them. First approaches to groups can take a variety of forms. This can include phone calls, items on websites, use of social media, leafleting etc. It is recognised that communication with some groups will be harder than others, however PLTs should adapt their communication methods to best suit the group they are engaging.

It’s worth noting that, as is their right, some of this FOI response is redacted, particularly around discussion of plain clothes PLOs. This means that whilst they have shared some parts of the manual with us, not all parts are available.

PLOs are there to aid fellow police officers, not protesters. The manual also states:

The danger of officers being perceived to be working covertly should be borne in mind whenever PLTs wear plain clothes.

The friendliness of PLOs can’t be taken at face value. Given that PLOs are able to wear plain clothes, and given that intelligence gathering is part of their job, this should cause even more wariness in protesters.

It’s undeniable that PLOs make an effort to appear friendly to protesters in order to gather information. Another group that are often present as supporters are legal observers. The Canary has previously explained the importance of legal observers. Back in May, we said:

Legal observers are trained to independently monitor police behaviour at protests, and to give support to protestors. In the current climate, policing is becoming more aggressive. This includes restrictions on protestors, increased police powers that are proven to target minorities, and the use of excessive force.

However, this document from the College of Policing takes quite a different view of legal observers. They say:

During demonstrations a number of persons will wear tabards denoting ‘Legal Observer’. These are individuals who will gather evidence against Police officers, often to be seen with cameras or taking copious notes. They may also continually challenge officers on what powers/legislation are being utilised.

If it’s acceptable for PLOs to gather information at protests, why would this wording in the FOI about legal observers be so hostile?

They go on to say:

This is a twisting of the truth. Legal observers do receive training. They don’t attend protests as protesters, but as independent observers who inform protesters of their rights and monitor police activity. If police forces are so supportive of PLOs, why would they object to legal observers?

It’s nothing new for protesters to be distrustful of PLOs. What this FOI response from the College of Policing does show, however, is that protesters’ suspicions about PLOs have been true. PLOs are there to infiltrate protests and gain intelligence. Their goal is not to assist protesters in knowing their rights but to present a more palatable face of policing. They exist to help their superiors manage protests.

With the draconian PCSC Act coming into force, it’s more important than ever that protesters know their rights, volunteer to be legal observers, and stand firm against efforts from the police to restrict the freedom to protest.

The College of Policing had not responded to a request for comment at the time of publication.

Featured image by Flickr/The Network for Police Monitoring – via CC by SA 2.0, resized to 770×403