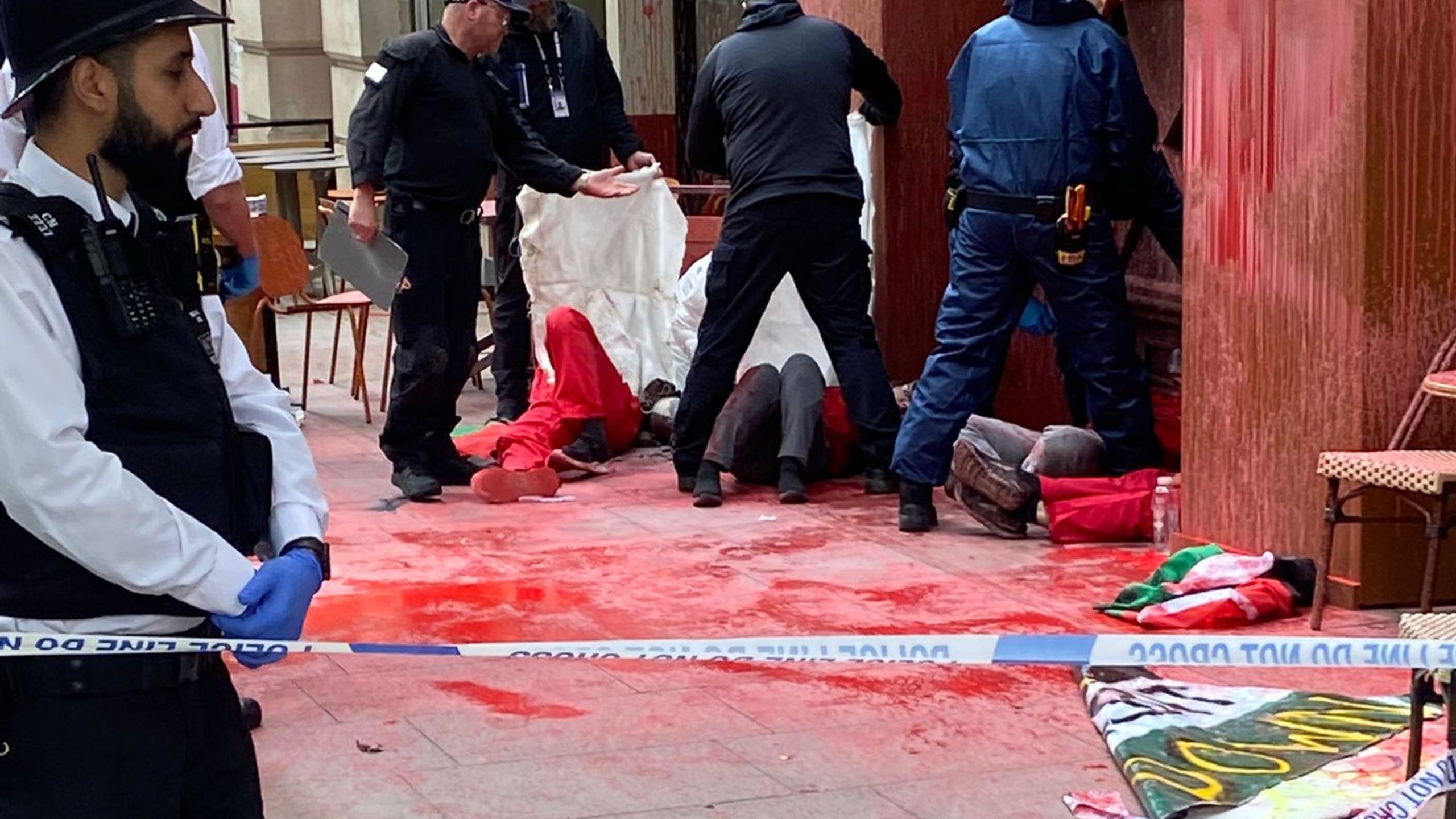 Four protesters have been arrested after gluing themselves together and spraying paint on a building in central London.

Footage showed the entrance of 77 Kingsway covered in red paint as the four demonstrators, their arms locked together in cylinder tubes, chanted: “Shut Elbit down”.

According to a press release from Palestine Action::

Today’s action has taken place at 77 Kingsway, host to Elbit Systems, Israel’s largest arms company. The company’s London headquarters were again targetted by Palestine Action activists, in the ongoing campaign to Shut Elbit Down. Four activists, two of whom are themselves Palestinian, have pulled the shutters on Elbit for the day after they secured themselves to the site entrance using a body lock-on, preventing worker-access. Marking the human cost of Elbit’s business, activists also doused the building in red paint, representing the blood of the Palestinians and other peoples killed by Elbit weaponry. The headquarters plays an important role in facilitating Elbit’s operations in Britain, and have been hit with direct action for the sixth time in two months.

Elbit’s British operations take place across 3 RAF Sites, 4 factories and 2 headquarters, amounting to 9 sites. The company, notorious for its production of arms destined for Israel, also holds extensive contracts with the British military. Just this month it was revealed that Elbit have been contracted by the Royal Navy to aid in providing training technologies for the Dreadnought nuclear submarine program. It’s plain to see that Elbit hold a firm stake in the business of warfare whether in Britain or in Palestine, Elbit describing its weapons as ‘battle tested’ on Palestinians.

A spokesperson for the group stated:

The century plus campaign of terror and settler-colonialism inflicted on Palestinians is today enabled by Elbit Systems, Israel’s largest arms company. For Palestine, the ongoing occupation is tantamount to a constant, bloody war. Drones crawl the skies, clouds of tear gas rain down, sprays of bullets are fired – ceaseless colonial violence backed by Elbit. We’ve struck at Elbit’s London headquarters yet again, because whilst the British-backed military occupation continues, so do we. No more hollow promises for Palestine, only this promise for Elbit: Our activists and supporters will work day and night until we’ve shut you down for good