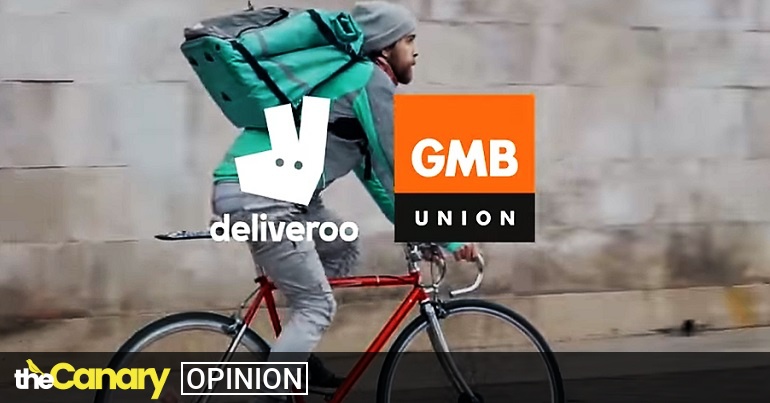 A notorious food delivery company has just signed a deal with an equally contentious trade union. It reeks of corporate capitalist cronyism. And, it looks set to completely undermine workers’ rights – despite what both parties are claiming.

The GMB Union is hardly radical. From its backing of fossil fuel-burning, earthquake-causing fracking to its support for Lisa Nandy in Labour’s 2020 leadership contest – the GMB is as centrist as a union gets. Now, its deal with Deliveroo cements the union’s status as a scabbing, right-wing, bosses’ Trojan horse.

The accompanying video was a nauseating piece of PR. It stated things like:

Together, Deliveroo and GMB are standing up for what matters to riders.

Eh? If the GMB is working “together” with Deliveroo – then who is the union “standing up for”? What exactly do they think riders care about? It could be they care about inflation that keeps making their slave wages worth even less?

No, of course not. If GMB are in bed with Deliveroo, then they’re saying that the most basic function of a trade union – standing up to bosses – is surplus to their requirements.

The IWGB Union, which has brilliantly represented Deliveroo workers for years, was fuming. It said:

Deliveroo… has spent hundreds of thousands of pounds fighting the IWGB in court to prevent collective bargaining with its riders. Deliveroo has always claimed that collective bargaining would come at the cost of flexible working, but this partnership proves that this has always been a lie to scare workers away from unionising. Now as we appeal our collective bargaining case to the Supreme Court, Deliveroo has cynically made this backroom deal with the GMB, which has no record of organising couriers and presents no threat to their exploitative business practices, to protect itself in the event that it loses at the final stage.

So, the GMB has effectively scabbed on another union.

The bosses and scabs who organised this dodgy deal with Deliveroo should be ashamed. But they probably won’t be. Because just think: was this even a difficult choice for GMB? No, it’s an easy choice for those shitheels. And, it’s nothing new for a centrist Labour-affiliated union.

As far back as 1944, Marxists were moaning about how Labour’s trade unions were effectively working for the bosses. As George Padmore wrote back then:

because the ideology of the ruling-class has permeated the Labour Movement and corrupted influential sections of the leadership…Trade Union leaders have become… closely tied with Monopoly-Capitalists. And as a corollary of this, some of those Labour officials are now actively preaching capitalist control and planning, and at the same time helping Ministers of a Tory-disguised Government to make regulations against the fundamental interests of the working-class. In this way, the Corporate State is being gradually introduced.

Ring any bells? That’s exactly where we’re at now. It’s time for every decent trade unionist to drop the GMB Union quicker than Keir Starmer can gulp down a curry and a beer. These scabs don’t stand up for workers. They represent no-one but themselves.