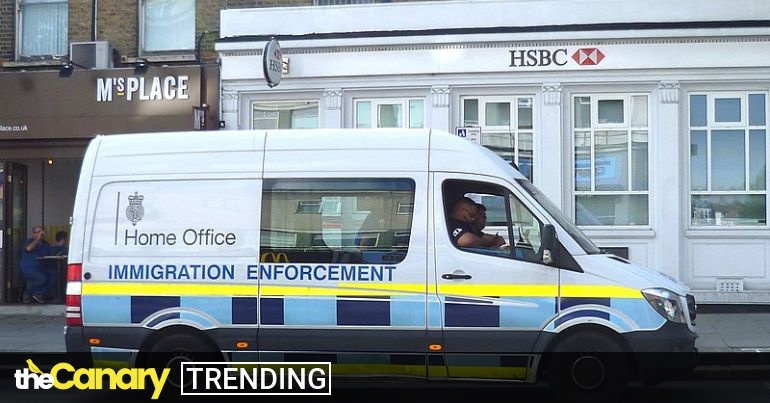 Immigration officers got more than they bargained for in Scotland last night. Ordinary citizens managed to beat Tory immigration policy after an Edinburgh raid was spotted early and attracted a large group of protesters. Eventually, the enforcement officers were rescued by local police.

Campaigners spotted the raid was underway on social media just before 6pm on 5th May:

Immigration officers spotted at Nicolson Square near Beirut – please go and see what help can be offered – some general advice on filming and gathering evidence here pic.twitter.com/8e0dUMsO2X

Footage shows the officers being booed as they exit the building they had raided:

Support us and go ad-free

?Here’s the moment Home office staff left the property on Marshall Street in Edinburgh where they were attempting to detain residents.

?”Shame on you” chant the crowd that forced them to abandon their efforts.

The large group of supporters were still chanting as Edinburgh police drove the officers away – minus the people they had reportedly arrested:

Embarrassingly, the officers were forced to ‘de-arrest’ those they had detained, according to reports:

Home Office have been forced to DE-ARREST everyone and are preparing to leave empty handed https://t.co/Ol5PaWi1lI

De-arresting is a complex concept. For example, under certain conditions an arrested person may be released without the arrest being recorded. A Guardian explainer has a more in-depth analysis of how de-arresting works:

According to section 30, subsection (7) and (7A) of the Police and Criminal Evidence Act 1984, to “de-arrest” is to allow that “a person who has been arrested under any act of law at a place other than a police station, shall be released before reaching a police station if a constable is satisfied that there are no grounds for keeping him under arrest.”

This is just the latest in a series of victories for ordinary people over the Home Office. A year ago, Glasgow activists pulled off a similar feat. Protesters physically blocked the immigration van from taking people away. Emotional scenes ensued as the released men thanked the crowd:

These raids are another symptom of the hostile environment in the UK, but residents of cities like Glasgow and Edinburgh are showing us what real solidarity looks like.

Let’s hope we see more of it across the country. Because it would wipe the smug smirk off Priti Patel’s face. More importantly, it’s the right thing to do.