Japan is becoming more militarist – and the US is driving it 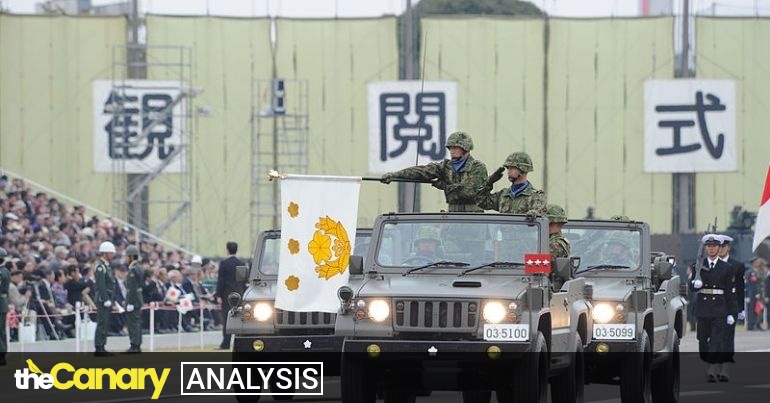 Plans to double Japan’s defence budget to around £86bn may mark the final winding down of the country’s anti-militarist posture. But the move will only make the world more dangerous, according to one Japanese foreign policy expert. University of East Anglia scholar Ra Mason also said that the US is driving the shift.

Writing in The Conversation, Mason said that the defence hike reflected those in European countries and signalled a bonanza for arms firms.

had been prompted by the conflict in Ukraine, but also reflected growing regional pressure from China, North Korea and Russia.

However, the pressure to militarise is not necessarily home grown. As Mason wrote:

The US has been pressuring Japan for some time to increase its defence spending to share the security bill in the Asia-Pacific region.

Japan’s post-war constitution still bans particular kinds of militarist behaviour, including the possession or development of nuclear weapons. However, in recent years defence reforms have still gone ahead under different governments. Article 9 of the constitution was created to prevent Japan becoming a military power again. Article 9 reads:

Aspiring sincerely to an international peace based on justice and order, the Japanese people forever renounce war as a sovereign right of the nation and the threat or use of force as means of settling international disputes.

In order to accomplish the aim of the preceding paragraph, land, sea, and air forces, as well as other war potential, will never be maintained. The right of belligerency of the state will not be recognized.

Recent polls suggest that while many Japanese people oppose abandoning it, a clear majority of elected politicians back reform.

Other experts also point to the gradual move away from a pacifist-type foreign policy over many years. Japan deployed troops to Iraq and Afghanistan (albeit in support roles) and it’s navy sank a North Korean ship in 2001. And, as the Council on Foreign Relations has pointed out:

Pressure from Washington has only increased since the 9/11 attacks.

Mason argued that US relations have been key to the change:

In the current era, relations with Washington have been paramount. But with America seemingly overstretched and in decline, Tokyo’s move to strengthen its military and deepen the alliance poses questions about Japan’s security identity.

There is an increasing danger for Japan of:

entrapment into American proxy wars and increasing economic involvement in the US “military-industrial complex”, the system by which the defence sector encourages arms spending and war.

Mason added that the current push for a more militarist Japan would allow big profits for defence firms. Much as we have seen in the West since the war in Ukraine began:

It also paves the way for Japan to contribute billions of dollars to an arms and security infrastructure industry that is booming in the wake of Russia’s invasion into Ukraine.

Mason also argued that Japan’s ministers are using goodwill over Ukraine to fuel militarism at home. Japan has taken refugees, and large donations have been made to help those affected by the war. But, he warns, that goodwill should not be used to ramp up Japanese militarism in the region.

Japan’s involvement in international politics since WW2 has been very different to other former imperial powers. It would be a tragedy if that shifted to a more aggressive foreign policy, but this seems to be occurring despite public pride in Japan’s role in the world. There will be few winners from a re-militarised Japan, least of all the Japanese people.

Featured image via Wikimedia Commons/JGSDF, cropped to 770 x 403, licenced under CC BY 2.0.