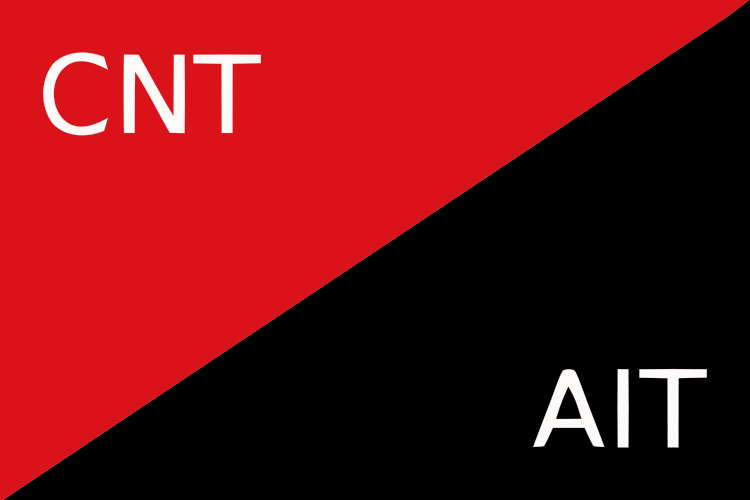 Of all the unions controlled by the CNT, one of the most important is without any doubt the Sole Barcelona Transport Union.

Installed in the former building of the Bank of Spain in the heart of the commercial quarter, it is, with its twenty-seven sections, a veritable ministry that has under its control absolutely all the traffic of the city and the port.

Thanks to the kindness of Comrade Victor Perret we were able to visit the different services of the union. The most important sections are those of the taxis, which we will soon return to in order to examine its functioning and accomplishments since its collectivization, and those of the subways, the trams and the buses. We then have the sections of the dockworkers, deliverymen, moving men, customs agents, garage workers, porters in the railway stations and markets, delivery services, etc.

We found in his office Comrade Langa, General Secretary of the union, who provided us with information on the functioning of the union center. Comrades were constantly entering and leaving, the telephone incessantly rang: it was busy as a beehive.

The goal of our union, he told us, is the centralization under one leadership of the different branches of urban transport. We will in this way succeed in avoiding any competition that might arise among them on the subject of the extension of active lines, their extension, and the expansion of services. Nevertheless, each branch maintains its autonomous administration, but through this centralization we will also avoid what occurred under the capitalist regime, where in one neighborhood all means of transport could be found, while others were to all intents and purposes deprived of them. At less expense we count on being able to organize a network of urban transport which will satisfy all users.

Comrade Langa then connected us with the secretary of the Taxi section. This, as we said, is one of the most important ones, given the place it occupies in the city, and it is also one of the most interesting from the point of view of its collectivization.

“Before the July movement,” he said, “we experienced a terrible crisis in our corporation. The principal causes were the lack of organization of the bosses and the competition between the chauffeurs, who were paid only 25% of their receipts without any fixed salary. But we also must take into account that almost all of them were affiliated with the CNT and after several years of struggle we wrested from the bosses the eight hour day. Since we reorganized our industry we have done away with work for a percentage and established a fixed salary of eighty pesetas per week.

“Before July our union was divided in to two sub-sections, one of those who drove for bosses or companies, and the other for those who owned one car and who we considered emancipated workers.

“After the victory of the working class in Barcelona and all of Catalonia and the return to normal life in our city, we decided on the total collectivization of the materiel and the annexes of the taxi industry by expropriating without indemnification the former owners and receiving them in the ranks of personnel.

“We found the materiel in very poor condition. This was the logical consequence of the little care and the continual effort it was subjected to and the poverty into which that industry had fallen. In order to repair and maintain the materiel we set up mechanical workshops and paint shops. With the agreement of the garage workers section we requisitioned several garages in the areas that seemed to us the most propitious. We also set up a telephone central which is in communication with the different garages. For the supervision of these different services, to ensure their proper functioning, and to administer them a administrative committee was created, under the control of the union that directs the taxi industry.

“Our painting workshops occupy fifty workers and the mechanical one seventy. Through today we have repaired and repainted 800 vehicles, and we hope to raise this number to 1000 before the end of the year, which will ensure work for 2000 or 2500 workers. Before the movement 2650 cars circulated; we found 2350, the rest being used for the war. These vehicles constitute a reserve we can dip into after we eliminate the materiel that cannot be used. We think the cities needs will be met with 1500 or 1600 vehicles and we must, by a rotation and reduction of hours, employ all the comrades who lived off the taxi industry before July 19.

“We also envisage, after the end of the war, the development of tourism, which is an extremely important source of revenue and which will allow us to occupy many comrades.

“This branch until now was in the hands a few unscrupulous profiteers who in a period of prosperity realized great fortunes, to the detriment of their personnel, who they shamelessly exploited. There was also another type of parasites: we are referring to the young people of bourgeois families who didn’t want to work and owned personal vehicles in which they drove around foreigners, living off tourism and various kinds of traffic.

“In summary, we think that we have to work with an overall vision in mind which will allow us to avoid divergences that would lead to an organic upheaval.”

We then visited, under the guidance of comrades from the union, different repair workshops where the mechanics were all busily occupied and the painters were repainting the taxis in black and red, the colors of the CNT. We then saw the immense garages where the currently unused vehicles are stored and which are being fixed so they will soon be able to be used, the vehicles that are in use, and the administrative offices.

These are great accomplishments with which we can credit the Sole Barcelona Transport Union. The comrades of the CNT have realized uncontested progress in the taxi industry.

Our comrades took as their slogan “OUR WORK.” It is, in fact, your work; it is through your syndicalist and collectivist spirit that you were able to carry out the task that was yours.

Retrieved from here on 31 January, 2012. Originally published in the POUM’s journal La Révolution Espagnole, No. 11, December 18, 1936 and translated (from the original) for marxists.org by Mitchell Abidor.

Detroit: I do mind dying. A study in urban revolution – Dan Georgakas and Marvin Surkin