Labour plan has an £8bn error says the IFS 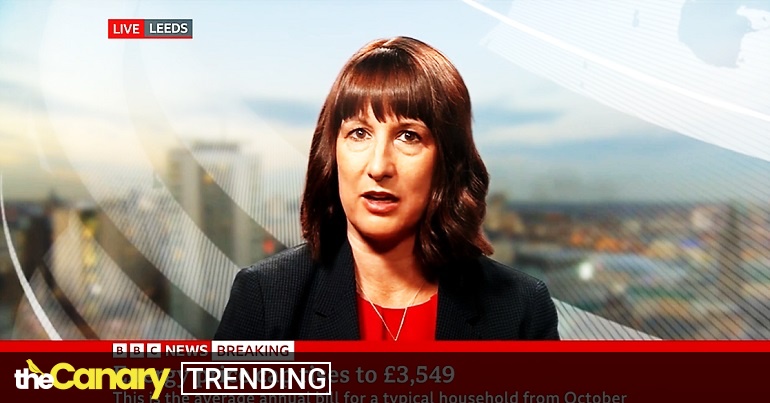 Labour has made a fundamental error in its entire policy around the energy price cap. Just as Ofgem announced the cap is hitting over £3.5k a year, a fact-checking site also claimed that Labour wrongly costed its proposal to freeze bills at the level set at the April 2022 price cap. Yet Keir Starmer’s shadow chancellor Rachel Reeves still managed to go on morning TV and defend the party’s clusterfucking.

From October, the average energy bill will be £3,549 a year. This will be an increase of £2,272 since August last year – a staggering 178% rise in just 12 months. But things will get even worse. As iNews reported:

That will mean a £5,339 rise since August 2021 – or a 418% increase. People are calling on the government and whoever the new PM will be to act. The Joseph Rowntree Foundation (JRF) said:

It is simply unthinkable that the price rises announced today can go ahead without further Government intervention on a significant scale.

Meanwhile, you’d think it would be simply unthinkable that Labour could mess its policy on this up. But no – “forensic” Starmer has managed to.

The party has said it would freeze prices at April energy price cap prices. That’s still a £694, or 54%, rise on August 2021 – hardly radical. But fact checker Full Fact has claimed that Labour has even got its maths wrong on this paltry offering. It says:

Labour’s “fully funded” energy bills plan does not pledge enough money to cover a freeze in the price cap.

The party failed to take account of most customers’ higher gas and electricity consumption during the winter in its calculations.

The Institute for Fiscal Studies (IFS) says Labour’s figures are around £8bn out. So, a respected fact-checker and one of the country’s leading economic think tanks say Labour has got its energy price cap policy costings wrong. What does its shadow chancellor do? Claim they’re in the wrong.

Reeves was on BBC Breakfast on 26 August. Host Naga Munchetty told her about Full Fact’s claims. The shadow chancellor’s response was:

Well, Full Fact, last time they fact-checked Labour analysis they had to withdraw their statement a couple of days later. So, I would take that with a pinch of salt.

Reeves may be referring to Full Fact having to make a correction to some figures in April. But, as Munchetty tried to ask her, what about the IFS? Reeves didn’t answer:

Rachel Reeves is told her figures are wrong and that Labour haven’t taken into account increased use of energy in the winter. pic.twitter.com/f1voCi5UMo

The energy price cap is one of the most disastrous events for millions of families in recent years. Labour should be all over this and the Tory government’s pathetic response. Yet here the party is, making basic errors in its costings of a policy which still isn’t good enough anyway. Clearly, Starmer’s Labour won’t be coming to save us anytime soon. So, it’s down to trade unions, direct action and communities themselves to fight back against the Tories’ and corporations’ ongoing class war.