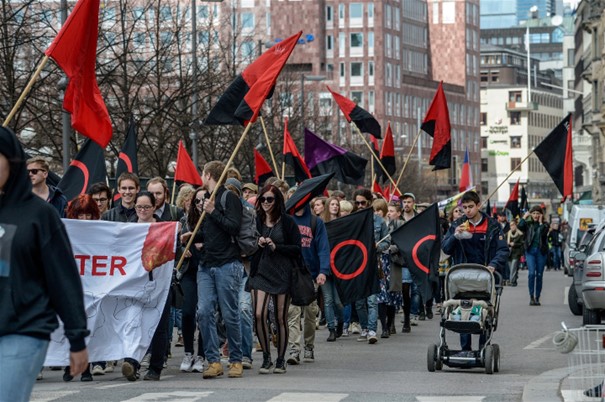 “To not study history is to remain a child.”

Can syndicalism and the vision of economic democracy rally popular movements again? In this article, Rasmus Hästbacka of the SAC makes a historical retrospective in order to find ways forward.

Is there a way out of this anti-human machine? I am referring to what is called “market economy” and “democracy” but actually is an economic dictatorship in the workplaces. It is, after all, the case that wage earners enrich a class of managers and business owners. It is a class that the workers have not voted for, nor have the right to direct or revoke. The economic dictatorship also sets strict boundaries for political democracy. Or as the classic liberal and educator John Dewey wrote: “politics is the shadow cast on society by big business”.

As far as I know, it is syndicalism that has pointed out the most credible path to a vision beyond class society. If one captures syndicalism in a single phrase, then syndicalism can be defined as independent workers’ struggle to achieve economic democracy. Economic democracy means staff-run workplaces and self-management. Employees then rise from subjects to equal citizens. Economic democracy is the alternative to what in the old days was called “wage slavery” and “employer’s tyranny”, but which in contemporary terms can be called economic dictatorship.

If syndicalism is defined broadly, as I just suggested, something interesting is revealed in the historical rearview mirror. The syndicalist currents have been significantly bigger than the trade unions which have called themselves syndicalist. Unfortunately, syndicalism in many countries has shrunk from a broad class movement to a marginal phenomenon. In Sweden, the independent workers’ struggles have declined both within and outside SAC. It can be difficult to distinguish SAC from a left-wing opinion bubble. Economic democracy has disappeared from public debate in Sweden as in many other countries.

I hope that syndicalism will grow both inside and outside SAC and that we will succeed in making the vision of economic democracy popular again. We can do that in at least three different ways.

First, we can invest more in workplace organizing. Thus, SAC’s center of gravity will shift from client service to solidarity between co-workers. Client service means that union representatives handle individual grievances. Client service is one-sided, while solidarity is mutual and the basis for collective struggle. It is through union struggles that the broad masses of the people can move towards economic democracy. Already in the present, syndicalist sections and cross-union groups in the workplace give a clue as how to manage the economy in the future. Organizing means democracy as a practice and not just rhetoric.

It is through union struggles that the broad masses of the people can move towards economic democracy. Already in the present, syndicalist sections and cross-union groups in the workplace give a clue as how to manage the economy in the future. Organizing means democracy as a practice and not just rhetoric.

Second, syndicalists can actively reach outside the left-wing bubble that SAC seems to be stuck in. It is about presenting syndicalism and economic democracy in a fresh language spoken in contemporary workplaces. It is also about repeating that SAC is a union open to all wage earners (except the managers), not a club only for leftists.

Syndicalist phrases from the 19th century about “smashing the state” and “introducing socialism through revolution” are about as cryptic as the word Scientology. But democracy at work is straightforward. Then we are talking to our colleagues and not only to ourselves. Once you have started discussions about staff-run workplaces, it becomes natural to also argue for a transfer of power from state and supranational bodies down to the population. Thus, democracy in full.

Third and finally, syndicalists can highlight historical facts about the strength of syndicalism in earlier periods. It gives an indication of how big a movement can be built again. We can probably build a bigger union movement than our predecessors. Because the old labor parties no longer attract with their stray tracks (state socialism).

The most important thing is, of course, to invest more in workplace organizing. But the vision of economic democracy is probably important in spurring more wage earners to organizing. Facts about the historical achievements of syndicalism can strengthen the credibility of the vision anew. In our ancestors’ treasure chest, we also find practical tools for organizing.

It’s easy to believe that the vision of abolishing class society is just an odd leftist opinion and always has been, because that’s what contemporary propaganda says. This falsification of history should be swept away. I therefore want to continue this text with examples of the power that syndicalism has exercised in the past. The text ends with two book recommendations concerning economic democracy where the authors look ahead.

The standard proof of the capacity of syndicalism is Spain in 1936 when several million workers introduced economic democracy (before fascism crushed it all). Instead, I choose USA as an illustrative example. During the 19th and early 20th century, syndicalist tendencies were as American as apple pie. Independent workers’ struggle for economic democracy was in the mainstream.

During the 19th and early 20th century, syndicalist tendencies were as American as apple pie. Independent workers’ struggle for economic democracy was in the mainstream.

In the United States, economic democracy has been advocated by liberals, conservatives and outspoken socialists, by deeply religious workers to ardent atheists. In the 19th century, slogans against wage slavery were raised by both liberals in the New York Times and conservatives in the Republican Party.

A seminal group of pioneers in the American labor movement were the female workers in the textile industry around Boston in the 1840s. They became known as The Mill Girls of Lowell. They saw economic democracy as a continuation of the American Revolution. “Those who work in the mills ought to own them”, the pioneers wrote.

The first broad class organization in the United States was the Knights of Labor. It was founded in 1869 and declined in the late 1880s. Economic democracy was at the center of its vision.

Into the 1900s, economic democracy was advocated by union leaders of the AFL and CIO (the American equivalent of the Swedish LO), without the leaders seeing themselves as leftists. Economic democracy was the common sense of the time. Everything else was odd deviations.

Howard Zinn’s book A People’s History Of The United States, tells the story about how the struggle for economic democracy was crushed by extreme violence and massive propaganda from the state and big business. In the Blair Mountain strike in 1921, even bombs were dropped from airplanes on workers. A nice dive into labor history is the book The Fall Of The House Of Labor by David Montgomery. Such studies bury the childish myth that Americans have always loved capitalism. A cocky yet thought-provoking quote by the Roman Cicero reads: “To not study history is to remain a child.”

In Sweden today, many people outside SAC find it difficult to distinguish our trade union from a left-wing party or an anarchist club. Sometimes I wonder if active syndicalists have become so used to a left-wing bubble that they have forgotten that Swedish syndicalism was once much broader.

Sometimes I wonder if active syndicalists have become so used to a left-wing bubble that they have forgotten that Swedish syndicalism was once much broader.

SAC was formed in 1910. Before World War II, SAC had more than 30 thousand members. Into the 1970s, SAC had a strong foothold in mainly three industries (mining, construction and forestry), where syndicalists voted on different parties and belonged to different churches (or were atheists). Then we have all the tendencies that have been clearly syndicalist without calling themselves so. An example is the 20-year wave of “wildcat” strikes that broke out in 1969.

When I became a member of SAC in the 1990s, SAC had about 9,000 members. In the counties Västerbotten and Norrbotten, I met syndicalists who, in addition to their union membership, considered themselves socialists, moderates, anarchists, liberals, communists etc. Such is the breadth of the working class. For my own part, I vote for the Center Party in the Municipality of Umeå. Breadth is a strength if we gather around workplace organizing through SAC.

Today, SAC has around 3,000 members. Structural changes have swept away SAC’s old strongholds. The important shift from a service union to organizing has been slow and the union has shrunk. When I talk to active syndicalists around the country, the left-wing bubble is palpable. Some approve of the bubble and wonder why one should organize with colleagues who vote for bourgeois parties. Some syndicalists want to break out of the margins but are unsure how to do it. For others, it is self-evident that SAC is a union for all wage earners and not a left-wing club.

America’s most famous liberal thinker, John Dewey, rejected capitalism as “industrial feudalism” and advocated “industrial democracy”. In Europe, the liberal John Stuart Mill took the same view. So, of course you can call SAC both liberal and Christian.

The question then is this: does it benefit SAC and workplace organizing to promote SAC as a liberal or Christian organization? Is it wise to present SAC as a left-wing organization? I believe it is time to popularize the idea of the class organization. A union that is open to all employees except the bosses. That is the primary guiding star of syndicalism.

If we invest more in workplace organizing, keep the vision of economic democracy alive and welcome all our co-workers to SAC, I think the union has a future.

I will end this text with two book recommendations. The first book is the Swedish anthology Tillsammans: en fungerande ekonomisk demokrati (Together: A functioning economic democracy), published in 2012 and edited by Gustaf Arrhenius and Bo Rothstein. It touches on steps that can be taken within capitalism through trade unions, producer cooperatives and other strategies.

The second tip is the book Of The People, By The People from the same year (2012). The author, economist Robin Hahnel, suggest how a completely new system can be introduced. Hahnel and his co-worker Michael Albert call the proposal participatory economy (Parecon, for short). It is the most ambitious sketch of economic democracy that I have seen. Their main source of inspiration is syndicalism.

Rasmus Hästbacka is a lawyer and has been a member of the Umeå Local of SAC since 1997. He is the aouthor of the book (free online) Swedish syndicalism – An outline of its ideology and practice. More articles by the author on Libcom here.

Do Or Die magazine – Voices From Earth First!

Collaboration and Debate in the ‘Durban Moment’: Steve Biko, Richard Turner and the politics of Black Consciousness, 1970-1974