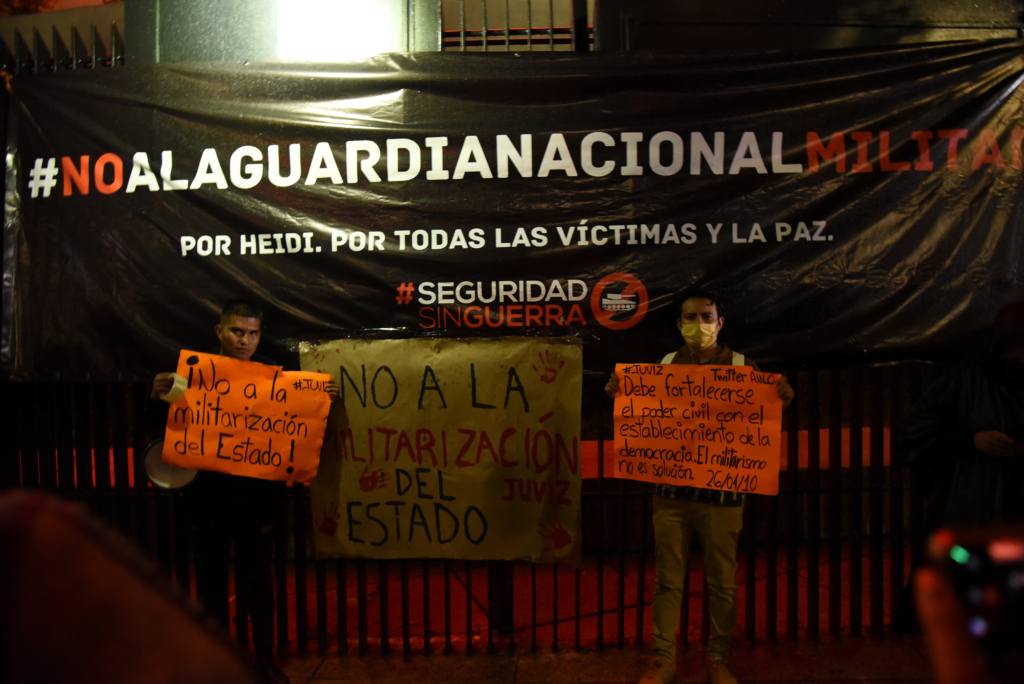 •          The approval of the proposal is in breach of Mexico’s Constitution and infringes on international treaties to which the country is a party.

•          Official figures on enforced disappearance, deprivation of life, torture, cruel and inhuman treatment, among others, show that state policy on public security over the last 16 years has further aggravated the already serious human rights crisis that the country faces.

The Senate’s approval of the proposal to formalize the affiliation of the National Guard with the Ministry of Defence (SEDENA) is an appalling act that puts the guarantee of human rights in Mexico at risk, Amnesty International said today.

“We deeply regret the Senate’s decision. We have already seen the disastrous results of the militarization of public security forces in Mexico over the last 16 years. Instead of continuing along this path, we call on the executive branch to design a plan for the progressive withdrawal of the armed forces from the streets, prioritizing the strengthening of civilian police forces and the development of public prevention policies aimed at guaranteeing public safety. Enough of human rights violations and impunity!” said Edith Olivares Ferreto, executive director of Amnesty International Mexico.

On 27 May 2019, Mexico established the National Guard as its main public security institution, under the civilian control of the Secretariat of Public Security and Citizen Protection. Since its establishment, the National Guard has been criticized for operating in an increasingly militaristic manner and the fact that more than 70% of its personnel come from the army or navy. In parallel, the National Guard has been criticized for the numerous human rights violations that are rightly attributed to it. Between 2020 and 2022, more than 1,100 complaints against this institution were presented before the National Human Rights Commission (CNDH) regarding crimes under international law including enforced disappearances, arbitrary detentions, unlawful killings and torture, among others.

“We deeply regret the Senate’s decision. We have already seen the disastrous results of the militarization of public security forces in Mexico over the last 16 years.

The reforms approved by the Senate today are the latest in a series of laws and proposals relinquishing control to the military over public security functions in Mexico since 2006, in the context of the so-called “war on drugs”. This militaristic approach to public security has had disastrous consequences for human rights. There are more than 100,000 disappeared people in Mexico, while the army and the navy have been accused of generalized human rights violations. SEDENA has been the subject of more than 4,000 complaints of human rights abuses to the CNDH since 2014.

The members of congress and senators have decided to infringe on international norms stipulating that military involvement in public security activities should be exceptional and only apply under certain conditions. In light of these standards, the United Nations High Commissioner for Human Rights and other UN bodies have repeatedly expressed their concern over the use of militarized army and police forces in public security activities in Mexico. These concerns and recommendations have today been dismissed.

In its report on Mexico in April 2022, the UN Committee on Enforced Disappearances urged the Mexican state to “abandon the militarized approach to public security”, as it has been insufficient and inadequate in terms of protecting human rights. It also recommended strengthening civilian forces and establishing a plan for an orderly, immediate and demonstrable withdrawal of military forces from public security tasks.

The reality in figures

Amnesty International, together with civil society organizations, has warned that the militarized public security strategy has been a failure. Mexico is a much more dangerous country today than it was 16 years ago. Killings have increased 218% between 2006 and 2022; in 16 years more than 100 journalists have been killed (15 of these in the first eight months of this year) and over 97% of the more than 105,000 cases of disappeared people in the country occurred after December 2006.

Members of the Mexican military have committed frequent crimes under international law and serious human rights violations with impunity. From 2014 to date, the CNDH has received at least 6,661 complaints of human rights violations committed by SEDENA, SEMAR (the Ministry of the Navy) and the National Guard. In all those years, SEDENA has been among the 10 institutions with the most complaints, and that list includes the National Guard.

For more information or to arrange an interview, please contact: