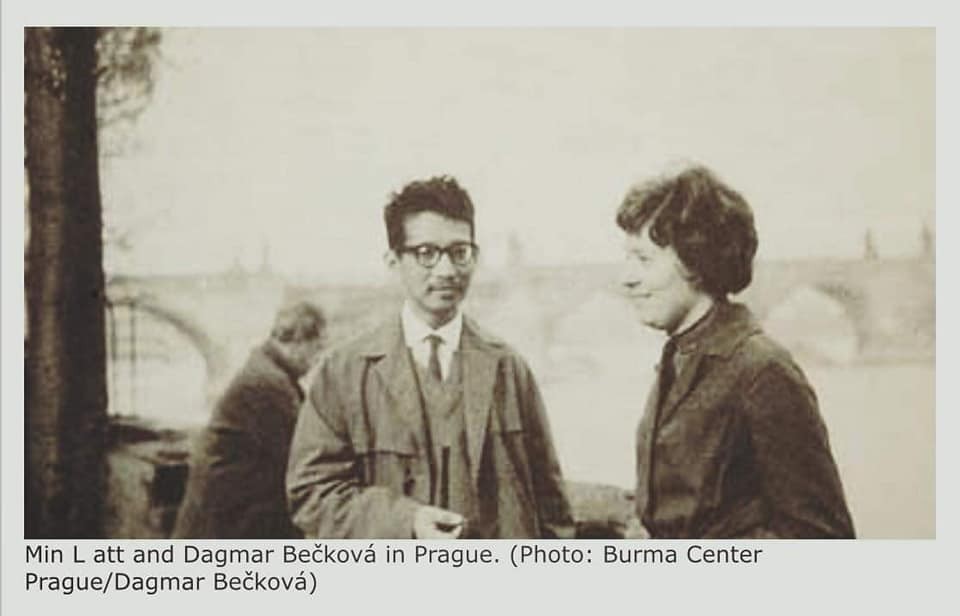 In 1947, a delegation from the Communist Party of Burma was requested to attend the 1947 International Student Union (ISU) conference in Prague, Czechoslovakia. Minn Latt Yekhaun, being a talented youth, was excited to attend the conference but was not selected as the party representative. A different prominent party member was selected by the Communist Party of Burma’s leadership to represent the party at the congress. Minn Latt Yekhaun left on his own for the congress and attended as an independent representative for Burma. He remained in Czechoslovakia to continue his academic career after the conference because Burma’s civil war has already begun. While concentrating on language studies, he was able to obtain both his master’s and doctorate degrees.
The necessity for a vernacular Burmese movement, which is thought to have been inspired by the literary revolution and vernacular Chinese movement headed by Chen Duxiu and Hu Shi on the eve of the May Fourth Movement, is the core focus of his thesis. Similar to the vernacular Chinese movement, his thesis “Modernisation of Burmese“ sparked a number of disagreements between conservatives and progressives. Minn Latt started instructing Burmese language at the Prague Language School in 1955. he also started working as a researcher at the Oriental Institute of the Czechoslovak Academy of Science in Prague and a lecturer at Charles University’s Faculty of Philosophy.

Anti-authoritarian Activism
When the leader of the Burma Socialist Program Party and autocratic military dictator of Burma, General Ne Win, visited Czechoslovakia in 1966, he addressed a letter to General Ne Win. He asked that General Ne Win reveal the truth about Burma to the world in the letter (The Irrawaddy Magazine, 2019).

Unique leftist: Democratic Confederalism before Rojava
The phrase “democratic confederalism” was first used by Abdullah Ocalan, the head of the Kurdistan Workers Party. Democratic confederalism has gained popularity among libertarian socialists and libertarian communists because it is a system of democratic self-organization with the characteristics of a confederation based on the principles of autonomy, direct democracy, political ecology, feminism, multiculturalism, self-defense, self-governance, and elements of a cooperative economy.
However, Minn Latt Yekhaun put up a similar notion in one of his articles in the 1970s. He gave less attention to feminism and the environment, though. He argued that the ethnic states vying for self-rule should establish their own little states. The majority of those who were able to read it, according to Minn Latt Yekhaun, claimed that Minn Latt Yekhaun demanded that the Burmese military and the Burma Socialist Programme Party, which claimed to represent the majority ethnic group, the Bamar ethnic group, give up on the fictitious hope of a fake union where the central power of bureaucracy ruled. According to the articles about him, Minn Latt Yekhaun demanded that the Union of Burma be completely dissolved.
All of the ethnic states would secede from the Union of Burma and establish their own sovereign republics under Minn Latt Yekhaun’s proposed confederation. Then he advised creating a legitimate confederation into which the ethnic states may enter with due consent. Since the Irrawaddy and the Thanlwin, two broad, long rivers, may be used to represent the entirety of Burma’s geography, he gave this idea the name “Irra-Lwin.”
Thakin Soe, the political leader of Red Flag Communist Party of Burma, a radical and intellectually more talented split from the Communist Party of Burma, also had similar idea (Win, 2010). Red Flag Communist Party of Burma was in the favour of separatism for several ethnic states and openly advocated for their self-determinism during the Burma’s civil war era. However, Communist Party of Burma insisted that more communist parties shouldn’t be formed anymore since they exist. Meanwhile, Red Flag Communist Party of Burma was in favour of several new communist parties in the ethnic states and ethnic people. However, Thakin Soe failed to express detailed analysis as precise as Minn Latt Yekhaun. That can be justified since Thakin Soe was an organic intellectual and revolutionary while Minn Latt Yekhaun was a trained academic and activist.

The Friends of Cobra and What They Represent