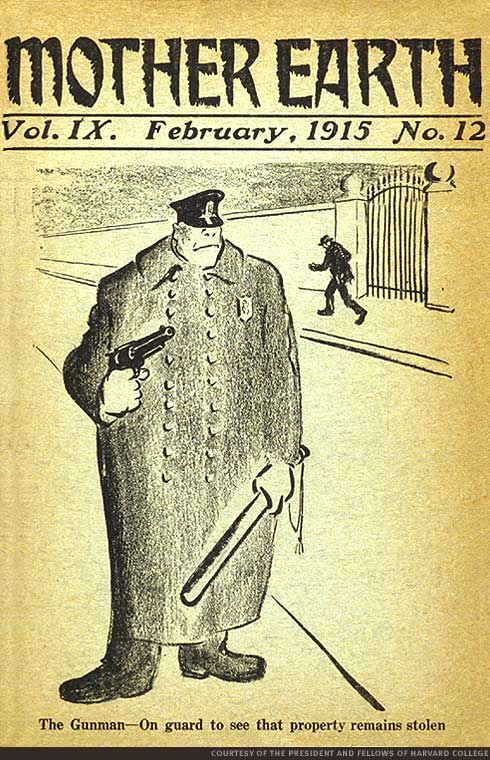 Mother Earth was an anarchist journal that described itself as “A Monthly Magazine Devoted to Social Science and Literature”, edited by Emma Goldman. Alexander Berkman was the magazine’s editor from 1907 to 1915. It published longer articles on a variety of topics including the labor movement, education, literature and the arts, state and government control, and women’s emancipation, sexual freedom, and was an early supporter of birth control. Its subscribers and supporters formed a virtual “who’s who” of the radical left in the United States in the years prior to 1920.

In 1917, Mother Earth began to openly call for opposition to US entry into World War I and specifically to disobey government laws on conscription and registration for the military draft. On June 15, 1917, Congress passed the Espionage Act. The law set punishments for acts of interference in US foreign policy and espionage. The Act authorized stiff fines and prison terms of up to 20 years for anyone who obstructed the military draft or encouraged “disloyalty” to the U.S. government. After Goldman and Berkman continued to advocate against conscription, Goldman’s offices at Mother Earth were thoroughly searched, and volumes of files and detailed subscription lists from Mother Earth, along with Berkman’s journal The Blast, were seized. As a US Justice Department news release reported:

A wagon load of anarchist records and propaganda material was seized, and included in the lot is what is believed to be a complete registry of anarchy’s friends in the United States. A splendidly kept card index was found, which the Federal agents believe will greatly simplify their task of identifying persons mentioned in the various record books and papers. The subscription lists of Mother Earth and The Blast, which contain 10,000 names, were also seized.

Mother Earth remained in monthly circulation until August 1917.[1] Berkman and Goldman were found guilty of violating the Espionage Act, and were later deported.