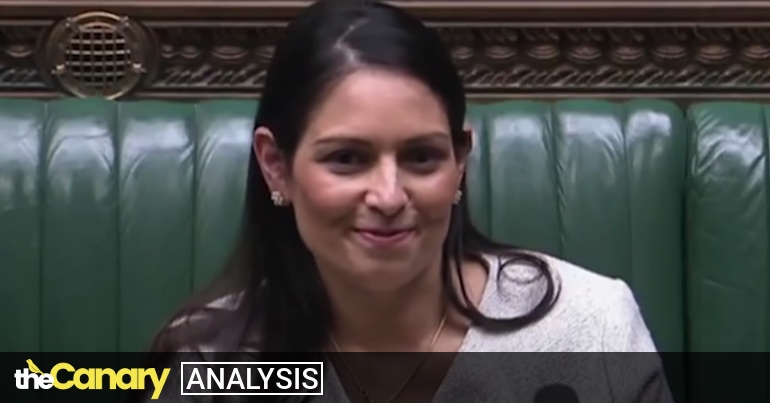 Priti Patel’s planed date for sending refugees to Rwanda is creeping closer. The Home Office has said people will be sent to Rwanda from 14 June. Under the plan, the Home Office will send people who aren’t granted asylum in the UK to Rwanda for processing and relocation.

As The Canary previously reported:

Campaigners, rights groups, and politicians have called the plans “ill-conceived, inhumane and evil.”

However, protests and legal challenges stand in the way of the government’s plans. Before we take a look at those, though, there have been a few recent developments.

The deportation plan has already been delayed. It was supposed to go ahead in May, but the government blamed legal challenges for the setback. In fact, Priti Patel mentioned “specialist lawyers” and Boris Johnson blamed “liberal lawyers” as the reasons behind the delay. The chair of the Bar Council, Mark Fenhalls QC, said:

Attacks on men and women for simply doing their jobs are irresponsible and undermine the rule of law.

The UN Refugee Council’s assistant high commissioner for protection, Gillian Triggs, said that the plans avoid international obligations that are:

contrary to the letter and spirit of the Refugee Convention.

The challenges from lawyers come as people who face the threat of deportation to Rwanda have been on hunger strike. The Guardian reported:

At least 17 people from Syria, Egypt and Sudan, who are being held at the Brook House immigration removal centre near Gatwick airport, began the protest when they were told they would be sent to Rwanda on 14 June as part of a controversial new scheme.

Incredibly, the Guardian also claimed to have seen a letter which tells the hunger strikers that if they don’t eat they’ll be deported sooner. The letter read:

Your refusal of food and/or fluids will not necessarily lead to your removal directions being deferred. In the interests of your health and safety we may prioritise your removal from detention and the UK.

Meanwhile, the BBC saw a letter of deportation notice which told the asylum seeker they could not appeal the decision.

The law which allows the government to do this doesn’t appear to come into force until the 28th of June 2022.

What they are doing can and will be challenged – and they know and expect that.

It remains to be seen if the latest deadline will be one the government can stick to.

However, this isn’t to say that the government can simply wait until 28 June and then carry on with its deportation plan. There are a number of legal challenges that are looking to stop them altogether.

Charity Freedom from Torture is preparing to bring a legal challenge against the plans to send people to Rwanda. Its crowdfunder for legal costs says:

Treating people who are seeking safety from torture and war as if they’re a problem to be got rid of is not only deeply immoral, but likely unlawful.

The charity sent a letter to the Home Office explaining why it was looking into legal action. The charity’s solicitor Carolin Ott said:

Our client further considers the policy constitutes a breach of the Home Secretary’s duty not to induce breaches of human rights by her agents and is unlawful because it is contrary to the Refugee Convention.

A policy which raises such a ‘shopping list’ of potential illegality and poses such a risk to individuals should plainly not be enforced until its lawfulness has been properly tested.

Meanwhile, campaigners from Detention Action has teamed up with charity Care4Calais and the Public and Commercial Services Union. The union represents Home Office staff who would have to carry out the proposed plan. They’ve also sent a pre-action letter to the government warning them about an incoming legal challenge. They say they’re challenging:

the Home Secretary’s failure to disclose the criteria dictating which people seeking asylum will be transferred by force to East Africa and which will remain in the UK.

Law firm InstaLaw has also launched its own legal challenge, which the Guardian reports:

While the legal challenges are happening, there’s also a protest planned. There’s going to be a protest at the Rwanda High Commission in London on Wednesday 8 June from 4pm to 7pm. Movement for Justice are calling for people to join them and make their support for asylum seekers clear:

The government’s deportation plans have received widespread opposition from lawyers, human rights activists, and everyday people who can see these plans for what they are: inhumane and illegal.