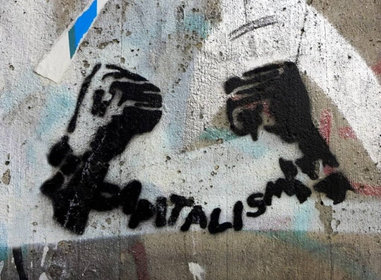 Comrades in Ukraine sent us this reflection, written on the 7th of June, to our recent essay on the cost of living crisis in the UK. We are flattered that people in far more dire circumstances than we are would find that article interesting enough to warrant a response.. If you want to read more of their stuff in English, check out their articles on Libcom covering the situation in Ukraine, Russia, and Belarus.

Dynamics of housing rental prices in Ukraine against the backdrop of the war (May 2022 compared to October 2021). Capital is clearly concentrated in the western part of the country. While some regions are bleeding, speculators in others are cashing in on the robbery of those who got out of this hell.

This is a letter from anarchist online magazine in borderland Ukrainian city of Kharkiv, being under daily Russian missile attacks for more than 100 days. To donate for humanitarian aid to civilian population or collective self-organized restoration campaign in destroyed blocks you are welcome to join this fundraising.

Noting a lot of interesting points in the recent article about the rise in living cost and British anarchist practices to combat it, it seems useful to add some information from the country with the most extreme living conditions in Europe. About half of the Ukrainian population lost their jobs since February 24, and dozens of candidates apply for each vacancy even despite about 3 million of economically active people went abroad with the invasion. Although more jobs have been lost due to the war than refugees have left, prices for necessary goods in fact are almost not controlled by the state. A draft law on criminal liability for speculation in socially and militarily significant goods was registered in Parliament just yesterday, and no one knows whether these norms will actually be implemented even if adopted. Therefore, we will consider the already working practices of direct action from several parts of the country, which we can divide into three groups: occupied, front-line and hinterland.

A good example of the first group is the Kherson region, almost completely captured by Russian military in the first days of the invasion. Humanitarian catastrophe there began almost immediately: the Russians blocked the roads and did not allow any humanitarian loads. People survive only due to grassroots networks. «It is possible that this humanitarian crisis was not created just like that. Invaders may have hoped that when they imported their humanitarian food from Crimea, people would be happy, because they simply will not have nothing to eat. That is why they did not allow Ukrainian products and still do not. As for the Russian humanitarian goods, it’s one can of some shit in one hand, plus maybe some pasta or sugar. When volunteers hand out their humanitarian aid, they expect a person to survive on it for a week or two. And despite the hopes of the occupiers, at first their humanitarian was greeted with stones», said one of the coordinators of such activists. They cannot buy food to everyone, so prefer the one who has the hardest situation. Also he adds that during all this time they have not been supported by any official Ukrainian state institution or structure, there is not any centralized assistance to the occupied territories, and no normal program to support people who have left it. Necessary funds for supply they raise by donations in social networks (probably from foreign subscribers).

A less unambiguous picture is visible in the frontline areas. For instance, in Kharkov, since the first war day until a slight decrease in the intensity of shelling at the end of May, thousands of people lived like a hippie commune in metro stations. Since the social services functioned poorly before the war, they turned out to be unprepared for such a scale of workloads. The supply of this underground city, the majority of whose population was pensioners, women and children, was also taken up by informal volunteer groups. However, along with the obvious advantages of non-profit mutual help inside and outside, a few weeks later a number of problems were revealed: unsanitary conditions, suspicious attitude towards strangers, teenagers drinking alcohol, as well as regular visits by the mayor for self-advertising by the distribution of humanitarian aid. It seems that the local authorities deliberately did not evacuate the people to the last moment, in order to do PR for themselves in this way. Therefore, it was a case when we see the interweaving of horizontal and vertical practices of «disaster communism» (by the by, medical aid on the stations was provided by a large international organization, and they got into a scandal with underpayment of wages to local personnel accompanied by lower efficiency compared to volunteer initiatives). 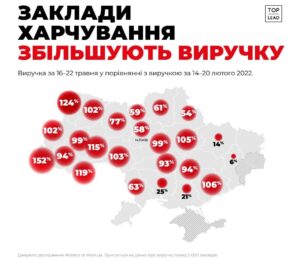 Growth in revenue by Ukrainian catering businesses for May 16-22 this year compared to February 14-20, 2022 shows similar geography

This story got a wide resonance beyond our city, and many voices pointed out that to avoid the formation of such a marginalized spaces, war-suffering people should be involved in the satisfaction of their needs instead of long idleness. In industries where self-employment is possible, cooperation can be a lifesaver, allowing to use scarce resources much more efficiently and find customers more easily. As we have already shown, the main revival of the Ukrainian economy is now observed in the deep rear of its western territories, one of which is Lviv, where the anarchist group Black Flag operates. Some of their participants joined the territorial defense since the beginning of the war, while other members continue to develop cooperation in the field of food and logistics. «In Lviv, there are no such problems with food as it is now in Kharkov, and it is definitely not so bombed-out. Nevertheless, a lot of people in Lviv left, some bakeries closed. One small one opened near us, we helped them, established with this bakery an alliance and started distributing their products. That’s it! And now our guys are transported there by car, packaged, etc. Yesterday they said that there are already 24 or 25 points where they carry bread. This is one of the options. When there is a lot people is much more difficult, and at the initial stage it is quite easy to create», explains to us one of this collective’s founders. Last fall, they also had an idea to start land cultivation somewhere in the Lviv region.

From other hand, in Ukraine there is no rent strikes or squatting movement, as suggested in the material of AF. The single significant exception seems to be mentioned Kharkiv subway camp, and even this tent occupation was not unauthorized: residents created it at the mayor’s public invitation. The reasons for this state of affairs are the subject for an entire sociocultural study. Let’s just accept it as a current fact.

In the first war weeks, took place several explosions of mass looting – in Melitopol, in Pologi or in not devastated at that moment Mariupol. Was this spontaneous redistribution of previously inaccessible goods the result of hunger threat or, on the contrary, an extreme manifestation of consumerist greed and egoism? Even anarchist circles have different opinions about this. We can only note that it happened exactly in the location a century ago was the base of the Makhnovist insurgent army…

Summing up, we must agree that despite all the specifics of Ukrainian conditions, our struggle really requires global international solidarity. The technological primitivism of Ukrainian economy and the fact that half of it is in the shadow sector paradoxically means that it is easier to adapt in times of crisis – and at the same time, it form here an atmosphere of indifference to any grandiose projects of future due to the concentration of the entire population (even the bourgeoisie!) on their momentary everyday issues. And since social thought in the periphery largely depends on the situation in the capitalist center, the successes of the Western comrades will contribute to the spread of revolutionary anarchism in Ukraine, where during these few bloody months working classes has already been excellently demonstrated the ability to self-organize.

Death to Gentrification, From London to Exarchia