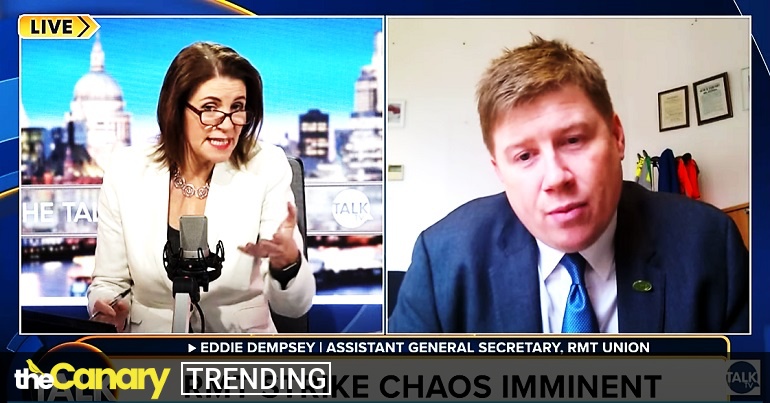 RMT (Rail, Maritime and Transport Workers) union members have voted for the biggest strike on the railways in over a quarter of a century. Predictably, the right-wing media and politicians have already got the knives out for the workers and their union.

RMT versus the rich

The strike, across nearly all train operators and Network Rail, is broad. The RMT wrote that:

pay, no compulsory redundancies, and a guarantee there will be no detrimental changes to working practices.

Almost as soon as the RMT proposed the strike ballot, the government acted. Grant Shapps was reportedly considering changing the law in response. He was looking at making it a legal requirement that a minimum number of railway staff have to work during strike action. RMT boss Mick Lynch accused Shapps of trying:

to make effective strike action illegal on the railways

Not that this stopped the RMT. It balloted its members on the action, and the results are now in.

71% of those balloted took part in the vote with 89% voting in favour of strike action and only 11% voting against.

The union will now be demanding urgent talks with Network Rail and the 15 train operating companies that were balloted to find a negotiated settlement to the dispute over pay, jobs and safety.

Already, the corporate media is losing its shit.

Right-wing pushback against the RMT

Sky News wrote (without saying who said it) that:

Services could be reduced to around a fifth of the normal weekday timetable. It is also possible trains will only run for part of the day, such as from 7am to 7pm, and only on main lines.

The Times decided to focus on RMT bosses earning a decent wage. Of course, Rupert Murdoch’s outlet didn’t frame it like that. It wrote:

It has emerged that rail union bosses took home nearly £500,000 in pay and perks between them during the first year of the pandemic — including more than £4,000 in car benefits.

‘You have your hands around the windpipe of the country’: Richard Madeley blasts militant union boss who’s holding UK hostage with threat of crippling summer rail strikes unless train drivers get 11% rise to average £59k salary

TalkTV’s right-wing zealot Julia Hartley-Brewer waded into the debate in a way only she could:

Julia clashes with the RMT union’s Eddie Dempsey over their ballot for strike action, sparking fears of a summer of discontent.

Julia: “What do you want a round of applause for going to work? That’s the job they’ve applied for and are paid to do.”@JuliaHB1 | @RMTunion pic.twitter.com/HIxFVuWxIn

Over at the Telegraph, it ran a hit piece reminiscent of a headline it published about former Labour leader Jeremy Corbyn. The article’s headline originally was:

The unions cannot grab back power like the 1970s

Then, the Telegraph changed it to:

Its ‘chief city commentator’ (whatever the hell that job is), Ben Marlow, wrote that the RMT strike poses:

a very real risk that the trade union movement reasserts its grip on Britain, in a throwback to the ruinous 1970s when militant bosses repeatedly brought it to a standstill.

Of course, all this is entirely predictable. Whenever there’s a whiff of workers fighting to improve their lives under the corporate capitalist system, its gatekeepers in the right-wing media strike back. We can’t have power being taken away from the rich, after all.