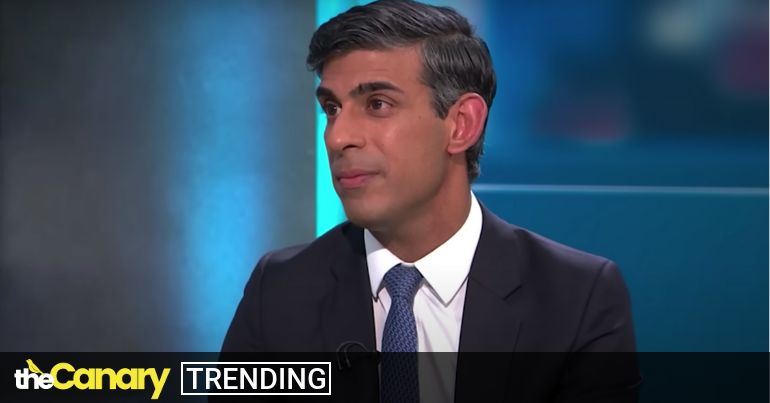 Rishi Sunak has had a go at “leftwing agitators.” He’s also, bizarrely, said about the Equality Act:

It has been a Trojan horse that has allowed every kind of woke nonsense to permeate public life.

Clearly, Sunak is trying to appeal to right-wing Tory grassroots.

In a speech in Sussex, he said:

What’s the point in stopping the bulldozers in the green belt if we allow leftwing agitators to take a bulldozer to our history, our traditions and our fundamental values?

Whether it’s pulling down statues of historic figures, replacing the school curriculum with anti-British propaganda or rewriting the English language so we can’t even use words like ‘man’, ‘woman’ or ‘mother’ without being told we’re offending someone?

Basically, he’s doing exactly what his Tory gutter-snipe colleagues are so quick to do – wading into the culture war. Because vague chuntering about British ‘values’, statues, history, and the rights of trans people aligns with a checklist of culture war dog whistles. It’s hardly surprising Sunak has taken up this tactic, but it’s dangerous nonetheless.

So often, criticisms of ‘wokeness’ come from white people who aren’t comfortable when racism is pointed out to them. It’s difficult to track the history of the term ‘woke’ – Vox claims that the word came into vogue after the killing of Mike Brown in Ferguson, USA:

The term has a specifically racialised history, coming as it did from Black communities. The reason Sunak and his ilk rush to use it is because it’s become a dog whistle that pours scorn on people who care about racial injustice. It’s become a byword for people who think statues of slave traders should be pulled down, and people who understand that trans rights are human rights.

As one social media user said:

The term has been weaponised. What seems lost on Sunak, however, is his own place in this culture war. Writer Monisha Rajesh pointed out:

Rishi Sunak doesn’t seem to get that the demographic against “woke nonsense” would have put shit through his parents’ letterbox.

Sunak is doing what many Conservatives of colour have done before him. By ramping up the bigotry, he’s trying to make Tory heartlands forget that he’s a brown man. Sunak can tap dance for bigots as much as he pleases, but it’s clear to the rest of us how right-wing he is. And, it’s a reminder that not all skin folk are kin folk.

Sunak has promised a review of the 2010 Equality Act. Again, we know exactly what this means – he’s trying to reach out to racists and transphobes. British Electoral Politics reminded people which characteristics the Equality Act protects:

What would be the point of Sunak promising to review this act, then?

Was wondering when the Equalities Act would be in play. Appropriate that the uber rich upper caste brown guy is planning to shred any protections minoritised people have https://t.co/kfAYHxbiDh

Much of my queer UK tl is rightly linking Sunak’s stance to the horrific Section 28 (although few white queer accs seem aware of wider ramification esp on race, gender, disability…)

Any review of 2010 Equality Act impacts ALL of us.

In reference to Sunak’s mention of “women” and “mother”, advocacy group Speak Out Sister clarified that the Equality Act doesn’t have provisions that prevent gendered language anyway:

An outright act on the Equality Act by Rishi Sunak on the entirely false premise that it prevents the use of ‘gendered words’. The act doesn’t contain any provisions preventing gendered language. https://t.co/kfrrXnafsA

Sunak is appealing to the bigoted parts of the Tory voter base who, presumably, want to hear culture war dog whistles.

He is as right-wing as any other Tory minister. They’re chancers who don’t care which minorities they throw under the bus. As long as it gets them the top spot at Number 10 so they can make more money for their mates.

The one thing Sunak’s dog whistles tell us about him is that he’s a power hungry shitweasel. If you want to appeal to bigots, that makes you a bigot too, regardless of the colour of your skin.