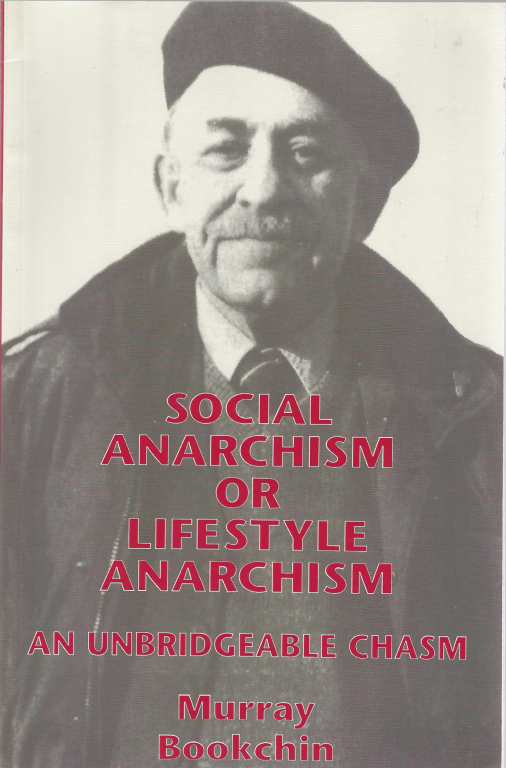 I well remember the argument that raged in the anarchist movement here in Aotearoa about the thesis presented in Bookchin’s pamphlet. The practical consequence of which, was a gradual purging of anyone who wasn’t committed enough to whatever “collective action” was being decided on by the various anarchist collectives and conferences, resulting in a smaller, more formal Anarchist Movement, made up of Socialist Worker style multi-issue protest groups (and vague attempts to federate them, like Aotearoa Workers Solidarity Movement). This movement, like its leninist and social-democrat counterparts, was surrounded and interpenetrated by a much larger and more dynamic anti-authoritarian/ communitarian movement which included both “social (ie protest) projects and “lifestyle” projects; social centres, music and arts festivals, independent groups and other tech co-ops, food co-ops which distributed dumpstered food, community gardens, community currencies etc This is still pretty much the case today.

Most of these practical projects were anarchic and egalitarian in their organisation and their goals, but were regularly told they because they were “lifestylist” instead of “social”, they didn’t qualify to call themselves “anarchist” or “socialist” or “communist”. So they didn’t. After all, in a society saturated in propaganda representing anarchism, socialism, and communism, as scary, violent, and aggressive, it can be easier to involve people in a project if it doesn’t strictly align itself to any such ideology, and instead talks about community, resilience, direct democracy, and maybe autonomy. The consequences being that joe public never sees these positive examples of anarchism in practice as “anarchist” – making it easier for anti-anarchist propaganda to work – and that credit for their positive outcomes accrues to other movements instead; subcultures like punk and indie, and the rainbow family; and cross-ideology networks like Indymedia, free software and open source, permaculture etc

I really think it’s worth reading both this pamphlet, and the Bob Black’s (admittedly much longer) rejoinder, ‘Anarchy After Leftism’, and coming to your own conclusions about exactly what “lifestyle anarchism” is, and if it even exists. Then and now, I suspect what Bookchin is probably describing, in painfully vague terms, is ‘consumer activism’, which all anarchists who spend money will probably engage in to some degree, but not on the assumption it can achieve the radical change we want, any more than voting will. The tendency to then extend the analysis to Food Not Bombs, or any other practice which serves practical needs rather than purely political goals, is both wrong-headed, and counter-productive, but fortunately, mainly for anarcho-lefist purists themselves more than for anyone else.

Thoughts after the first round of NHS strikes