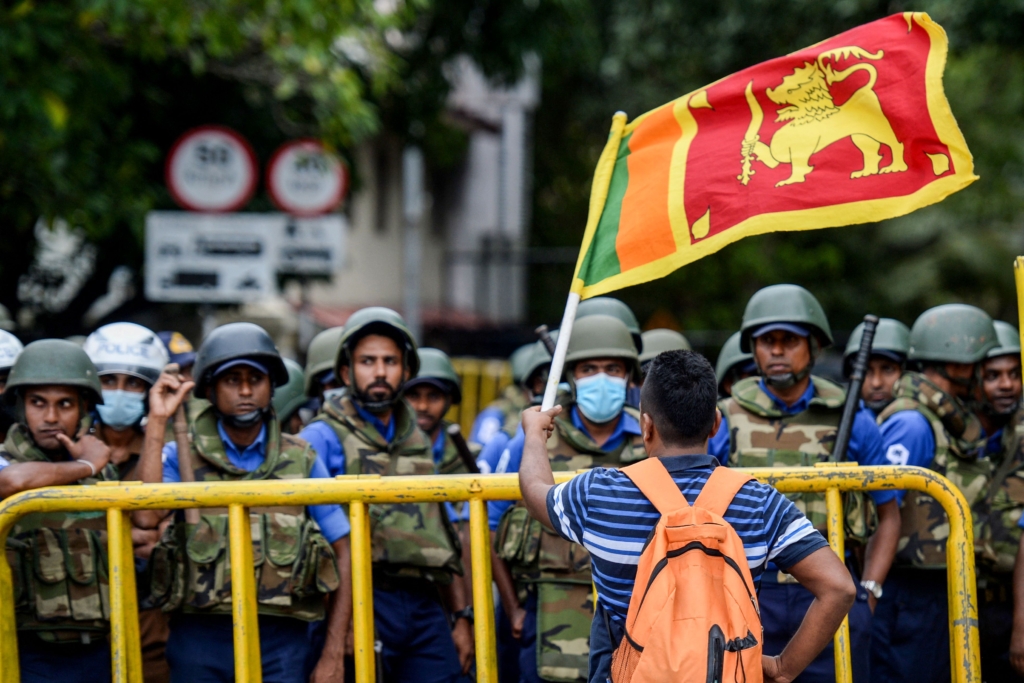 The new Sri Lankan President must immediately stop the shameful, brutal assault on peaceful protestors, Amnesty International said today after the military carried out a pre-dawn attack on the peaceful protest site outside the Presidential Secretariat, ‘GotaGoGama’, hours before the protestors were due to vacate the area in Colombo.

In the early hours on Friday, a massive joint operation by the military, police and special forces forcefully removed protestors sleeping in tents at a peaceful protest site established in Colombo in April this year. Protestors were beaten and assaulted. The area was blocked, preventing access to media, lawyers and activists. According to reports, more than 50 were injured and 9 people have been arrested.

Amnesty International strongly condemns the pre-dawn attack by security forces on peaceful protestors at Galle Face. It is shameful that the new government resorted to such violent tactics within hours of coming to power.

“Amnesty International strongly condemns the pre-dawn attack by security forces on peaceful protestors at the iconic protest site ‘GotaGoGama’ at Galle Face. It was the main anti-government demonstration site and had drawn global attention to the dire situation faced by the people of Sri Lanka following the economic crisis in the country. It is shameful that the new government resorted to such violent tactics within hours of coming to power. The people’s right to protest needs to be respected. Any pending charges against those arrested for peacefully exercising their right must be immediately dropped,” said Kyle Ward, Amnesty International’s Deputy Secretary General.

“The protesters have a right to demonstrate peacefully. Excessive use of force, intimidation and unlawful arrests seem to be an endlessly repetitive pattern in which the Sri Lankan authorities respond to dissent and peaceful assembly. These repressive actions clearly do not meet Sri Lanka’s obligations under international human rights law including with regard to people’s freedom of expression.”

Assault and ill treatment of protestors

At around 01:00 local time (19:30 GMT Thursday), the military and police armed with riot gear violently descended on the protest camps, indiscriminately beating and assaulting everyone and everything in their way, dismantling the tents in which protestors had been sleeping for over three months.

All access points to the protest site were blocked ahead of the raid. Eyewitness accounts and media reports say that the military attacked many protesters, especially those trying to film the developments. Soldiers broke apart ‘one tent after the other’ in the stretch leading to Presidential Secretariat and dismantled the protest site.

An eyewitness interviewed by Amnesty International early morning of Friday at the attack site recounted, “There were about 200-300 demonstrators at that time, I would say. Suddenly (the forces) came out from (behind) the barricades and totally destroyed and broke down the tents. There were enough police and military to swamp the area. The police and especially the army beat up peaceful protesters.”

“(The military) did these acts in anger. We saw some of the demonstrators engaged in (the protest) had brought their guitars. We saw them take those and smash it on iron fences. We saw them beat up people… The crackdown was brutal.” Video footage shared by media also show unarmed individuals/protesters being assaulted by security forces.

(The military) did these acts in anger. We saw some of the demonstrators engaged in (the protest) had brought their guitars. We saw them take those and smash it on iron fences. We saw them beat up people… The crackdown was brutal.

Eyewitness accounts suggest that the attack on protestors and their tents came as a complete surprise, even though there had been some rumours that there may be an attack. Protesters had been caught off-guard as they could not understand the reasons behind such an attack. There was no warning given to vacate the area by the military and police personnel before the use of brute force against the protestors.

Another female eyewitness, who had been asleep at the protest site when it was raided, told Amnesty International, “At around 1.30 a.m. there was shouting (from other protestors) saying ‘they have surrounded us, they have surrounded us, get up, get up.’ When I went outside, I saw a large group of army people coming towards us. Some of them had covered their faces so I don’t know who they are… There was no announcement… They hadn’t told (us) to move out. Suddenly, they had started hitting the tents around us. They hit the youth the same way they hit the tents.”

Amnesty International calls for an independent and impartial investigation into the incident. The perpetuators of the violence, and those who commanded the attack, must be identified and held accountable for their actions.

They hadn’t told (us) to move out. Suddenly, they had started hitting the tents around us. They hit the youth the same way they hit the tents. The newspaper The Hindu reported that around 3.00 a.m. as news of the attack spread, media and activists reached the spot but were denied access as raids were ongoing. A security personnel stationed on Galle Road leading to the protest site reportedly said, “No one can go. Not even the media or lawyers.”

A BBC video journalist was reportedly beaten by the military and his phone snatched by a solider and videos deleted.

Lawyers who sought to intervene in their professional capacity were also reportedly prevented from doing so by security forces. At least two were reportedly assaulted.

Several journalists and at least one lawyer has reportedly been detained.

“Sri Lankan authorities must refrain from arresting people for exercising their right to peaceful assembly within sight and sound of the intended target of the protest’s claims. In addition any arrest must follow due process safeguards such as prompt access to legal counsel. We are very concerned by the human rights violations currently taking place in Sri Lanka as the authorities are using unlawful force and restrictions on movement in an attempt to quell dissent,” said Kyle Ward.

No one can go. Not even the media or lawyers. Tents of monks, deaf and mute demonstrators’ and soldiers with disabilities attacked

The security personnel aggressively dismantled protesters’ tents put up at the demonstration site, including those of the deaf and mute community and soldiers with disabilities who had been part of the peaceful protests since April.

‘I saw them hitting people on both sides and coming towards us. We ran the other way since they were chasing us… The deaf and mute demonstrators’ group had a very young translator with them. That group is usually in that area. No one knows what happened to them… no one could find them. At the ‘war heroes’ tent there was a small group of soldiers with disabilities, there were some monks in front as well… they had hit them also,” recounted an eyewitness to Amnesty International.

Ranil Wickremesinghe was sworn in as President on Thursday after ex-president Gotabaya Rajapaksa fled the country last week. A new Prime minister took oath today. After a 100 days of protest, there was a pledge by the protestors to vacate parts of the protest site on Friday. But the military’s aggressive takeover of the protest site under cover of darkness less than 24 hours after the change in regime, is shocking.

“We think what the government did, attacking a peaceful struggle was wrong,” said a protestor and an eyewitness to the Friday morning incident.

We think what the government did, attacking a peaceful struggle was wrong. Amidst appeals to the international community to assist Sri Lanka, Amnesty International calls on the authorities to take action immediately to protect the rights of those peacefully protesting at GotaGoGama in Colombo and in other places in Sri Lanka. The charges against all the protesters must be dropped as they were detained solely for peacefully exercising their human rights.

“Justice and accountability from the Sri Lankan authorities is the need of the hour as Sri Lanka looks towards stability ahead of an IMF bailout to address the economic crisis. Amnesty has repeatedly called for restraint from security forces amidst the emergency regulations enforced in the country. Using them as a pretext for more human rights violations is deeply concerning and reflects poorly on the new administration in Sri Lanka. They must not lose their chance to start afresh and break off from the cycle of repression of people’s rights which further compounds the mistrust and fear in the people of Sri Lanka. Their right to peaceful protest must be protected,” said Kyle Ward.

The right to peaceful protest must be protected.