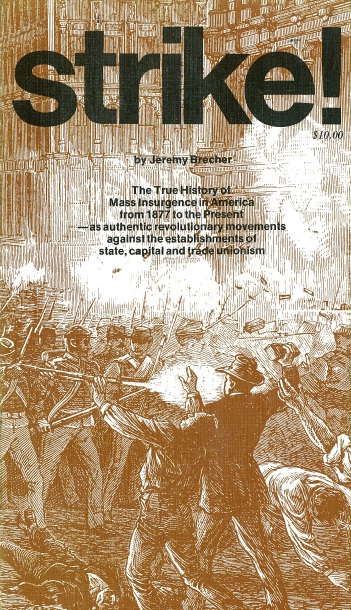 Now I don’t think this is particularly damning criticism given the scope of the book, which is looking at mass strikes in the US since the 1870s, which were mostly by white, male workers,

Comrade, in all due respect, this isn’t accurate.

From Chapter 1 on “The Great Upheaval” Brecher talks about how the strike was sparked and then propelled across the continent because its interracial character (with African Americans, Native Americans and immigrants prominently involved in the general strike that created the “St. Louis Commune”). For example:

Coal miners and other — “a motley crowd, white and black” — halted a train guarded by fifty U.S. regulars after it pulled out of Martinsburg.

The one great sentiment embodied in the Knights of Labor was the idea of solidarity among all workers, whether white or black, skilled or unskilled, men or women.

Chapter 4. The strike of textiles workers in Lawrence, Massachusetts who were mostly young women immigrants:

The [Unemployed] Councils’ weapon is democratic force of numbers… to eliminate through publicity and pressure discrimination between Negroes and white persons, or against the foreign born…

Brecher was in the U.S. council communist group Root & Branch when he wrote Strike!, so throughout the book the theme of class unity — across divisive lines of race, ethnicity, gender, native vs. immigrant, etc. — is clear. I’m my opinion, it was his attempt to apply Rosa Luxemburg’s method for The Mass Strike to the breadth of the working class history of the U.S.

If I were to suggest books to read about class war in the U.S., I would put Strike! first, followed by Adamic’s Dynamite, but Zinn’s excellent People’s History would be further down the list. Zinn does a fine job covering social movements, but his class analysis isn’t as sharp as either Brecher or Adamic’s.

Again, the title of the book is Strike! and it doesn’t purport to cover social movements that were no less important than the many mass strikes, general strikes, and wildcats that occurred in the U.S. since 1870 (strikes in that period numbered around 300,000 overall — a fact that has often been underplayed by the Left when it still said American workers were “bought off”). So the historical context of when he first wrote it in 1972 is important. The left was running around calling cool things juche to give props to Kim Il Sung and the Workers’ Paradise of North Korea, when they weren’t chanting “Ho, Ho, Ho Chi Mihn, the NLF is gonna win!” in homage to Ho Chi Mihn (which in hindsight we learned had been executing their political enemies, be they Trots or other leftists, in proper Stalinist fashion in Ngo Van’s amazing In the Crossfire: Adventures of a Vietnamese Revolutionary). There was still an extremely strong anti-American “my enemy’s [the U.S.] enemy is my friend” dogma in the Left. So nearly every despotic Third World dictator who spouted anti-Yankee rhetoric came in for hero worship. So the class analysis and documentation of working class self-activity (in the George Rawick sense) in Strike! is a healthy corrective to all that statist, anti-intellectual “People’s Power” ideology of the time.

Other archives hosted on libcom.org