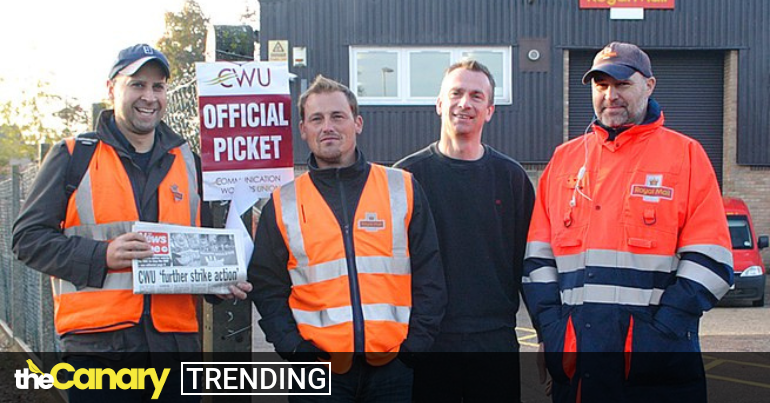 A new wave of strikes are underway across the UK. From postal workers to barristers, organised labour is turning out on picket lines against the backdrop of looming energy cost hikes. Workers across the UK are fighting back by withdrawing labour, sharing their experiences and, on one occasion, surfing around ports at high speed!

The strikes come as Don’t Pay, which is campaigning to encourage people to refuse to pay extortionate energy bills, reported an 80% hike had been nodded through by regulator Ofgem:

It’s time to rise up and fight in our millions to take direct action – strike! https://t.co/RYOlAVpjfL#dontpayuk

The hikes emphasise how important bottom-up resistance is right now. And, a number of unions are taking action as we speak.

Posties for the win

Postal workers are striking as part of the Communication Workers Union over pay. Royal Mail bosses have been paying themselves massive bonuses, even as the cost of living crisis has ramped up:

There are 115,000 postal workers on strike today

Royal Mail used to be publicly owned not for profit

That profit would be enough to give every striking worker over £6,500#isupportmypostie #StandByYourPost Solidarity @CWUnews ✊

CWU general secretary Dave Ward challenged bosses to debate him on the issues live on TV:

Come on then, @RoyalMail – let’s have a live debate #StandByYourPost pic.twitter.com/ZbWtZ9Jpda

Unusually, barristers have also gone out on strike. Traditionally seen as comfortable professionals, barristers have increasingly been forced to work unsustainable hours. Because their work is, in essence, freelance, the hours mean their pay is extremely poor in some cases:

Barristers who work in our criminal courts have voted for an all out strike on 5 September. This is historic, and necessary.

This strike is about protecting *YOUR* rights, whether you know it or not.

Here is why you should care:

The stakes are high.

Yet in their first few years of practice, specialist criminal barristers who both prosecute and defend in our criminal courts are earning less than £13,000 a year.

Stick it out for the first few years, then?

The rates are set by the Government, and in real terms earnings have suffered a 28% cut over the last two decades.

Due to these working conditions, the system has lost a quarter of its specialist criminal barristers over the last five years.

This attrition rate is

One barrister took the time to write this useful thread on working conditions in her profession:

A family member asked me the other day about why criminal barristers were on strike. They didn’t understand it but we’re genuinely interested.

I tried to explain it to them and as I thought about it and gave them this example, I felt compelled to write it down.

Criminal barristers are not “fat cats”. I don’t sit at home drinking champagne.
I frequently work through the night on cases to help cover cases for colleagues.

The system is broken and unless there is investment across the board, it is going to implode. @TheYoungCBA

The Labour Party’s policy proposals for dealing with the economy have been found to be basically useless. Full Fact reported that the party’s energy bill proposals did not account for, of all things, winter:

Labour’s “fully funded” energy bills plan does not pledge enough money to cover a freeze in the price cap.

The party failed to take account of most customers’ higher gas and electricity consumption during the winter in its calculations. https://t.co/mx55C8Sd8c

Another moment of excellence from Keir Starmer and his cronies.

While Labour flaps, the port of Felixstowe was also closed down by a strike this week:

??The largest port in the UK has stopped working

Britain’s largest container port, Felixstowe, has all but come to a standstill after 1,900 Unite union members walked off the job for eight days following failed wage negotiations

first strike of port workers in the UK since 1989 pic.twitter.com/3GItIVhBFV

And one genius worker decided to do a lap of the port on a powered surfboard while flying the flag of his union Unite:

A striking docker at Felixstowe laps the deserted port with their @unitetheunion flag flying high.

Workers’ power at its best – nothing moves without us.

Brilliant work from the striker who captured this moment and from all those taking a stand for a proper pay rise ? pic.twitter.com/s4UFOMA3Qp

Workers are on the move and taking on their bosses directly. As Labour struggles to understand how seasons work, extra-parliamentary campaigns like Don’t Pay and Enough is Enough seem to be gaining traction. This can only be positive moves towards an invigorated workers’ movement.