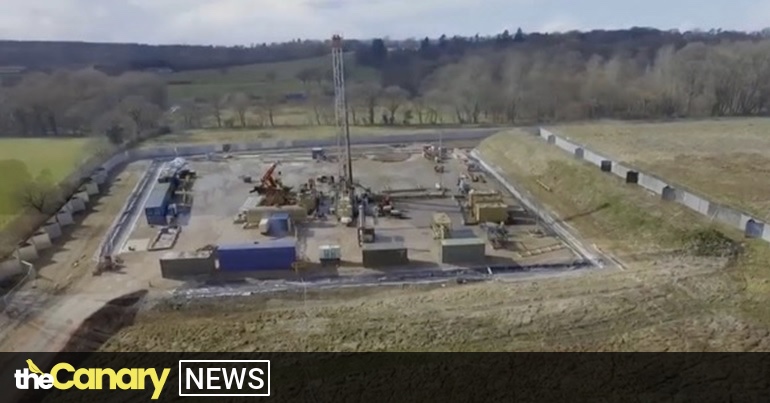 A years-long legal battle against an onshore oil project in Surrey is heading to the Supreme Court.

In February, the Court of Appeal ruled that Surrey County Council had acted lawfully in approving the fossil fuel project. However, campaigner Sarah Finch has now secured permission to appeal the case at the UK’s highest court.

The case revolves around whether the council should have considered downstream emissions, known as Scope 3 emissions, in its approval of the Horse Hill development. These are the emissions produced from the burning of fossil fuels, rather than those that occur during the production of them.

In other words, the Supreme Court will decide whether the council was wrong to overlook the emissions that will inevitably result from the use of the fossil fuels when approving the development.

Surrey County Council approved the oil project in 2019. It’s an extension of an existing site referred to as the Gatwick Gusher. Horse Hill Developments Ltd could potentially extract three million tonnes of oil from the site over 20 years. The company is a subsidiary of UK Oil & Gas (UKOG).

Sarah Finch – as part of the Weald Action Group, which opposes fossil fuel development in southern England – has legally challenged the project since its initial approval. She insists that Surrey County Council should have taken the downstream emissions into account in environmental impact assessments (EIA) because they are an indirect effect of the oil project. EIAs must take likely significant indirect effects into account.

Moreover, after securing permission for appeal at the Supreme Court, she said:

If councils don’t assess all the climate impacts of a proposed development before giving it permission, then we have no chance whatever of staying within safe climate limits

UKOG responded to the development in the case, saying that it remained “convinced that planning consent was granted entirely lawfully” and will “strongly contest any further action against its interests”.

The High Court heard Finch’s case in November 2020. But as DrillOrDrop reported, justice Holgate dismissed the claim. He ruled that although the EIA regime requires authorities to consider both direct and indirect effects of projects in planning decisions, the ultimate use of the fossil fuels from Horse Hill falls beyond “the scope of that obligation”.

The Court of Appeal reviewed his decision. In a 2:1 ruling, the judges decided that the High Court’s dismissal was right. However, one of the two judges in agreement – lord justice Lewison – said it was “not without hesitation”. And the dissenting judge, lord justice Moylan, found that the exclusion of Scope 3 emissions from the EIA meant that it failed to “assess the relevant and required effects of the proposed development”.

Writing in the Planner, Friends of the Earth (FoE) solicitor Katie de Kauwe also asserted that the Court of Appeal ruling was “an improvement in climate terms” from the High Court’s decision. Whereas Holgate ruled that Scope 3 emissions couldn’t be indirect effects as per the EIA regulations, de Kauwe wrote, the Court of Appeal:

has ruled that what is, and is not, an indirect effect of a development for the purpose of EIA is a matter for the local planning authority to decide.

FoE supported Finch in the case.

The council welcomed the majority decision. But Finch’s solicitor Rowan Smith, from the firm Leigh Day, pointed out that Moylan’s decision meant:

there is now Court of Appeal authority that, when decision-makers come to consider granting planning permission for fossil fuel projects, they may be required by the law to assess the greenhouse gas emissions from the use of the extracted oil, coal or gas.

Numerous projects in the pipeline

In light of the varied conclusions of the judges, and the successful application to take the case to the Supreme Court, Finch told DrillOrDrop that:

She also said that if the Supreme Court rules in her favour, the case would have ramifications for other onshore fossil fuel developments.

A 2021 report by FoE revealed there were seven potential onshore projects in the pipeline in the UK, including Horse Hill. The New Economics Foundation wrote the report alongside FoE, with Uplift additionally contributing to its research. Overall, the report highlighted 40 projects that fossil fuel companies planned to launch in the coming years, including 30 offshore developments and three coal mines.

In 2021, Greenpeace took the UK government to court over an offshore project. Similarly to Finch’s case, the environmental NGO challenged the government’s lack of consideration of the climate impacts of the Vorlich Field in the North Sea when granting a permit for it to BP.

Scotland’s Court of Session ruled in the government’s favour in the case last October. Greenpeace has appealed this at the Supreme Court. The organisation also plans to legally challenge authorities’ approval of a further offshore field called Jackdaw.

The International Energy Agency produced a report in May 2021 that called for an end to all new fossil fuel developments. In order to meet net zero by 2050, the report said that there can be no “new oil and gas fields approved for development” and “no new coal mines or mine extensions” from 2021 onwards.

Nothing could be more clear or present than the danger of fossil fuel expansion. Even in the short-term, fossil fuels don’t make political or economic sense.

Granting planning permission for more oil extraction in the middle of a climate crisis without considering its full impact on our planet makes no sense and is, I believe, unlawful.

The Supreme Court is expected to hear the case in 2023.