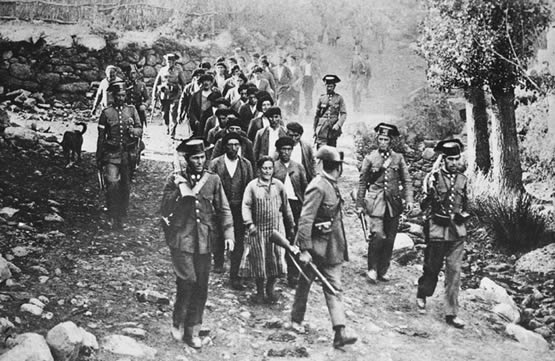 The 1933 elections in Spain had seen a massive victory delivered to the right, represented by the Confederación Española de Derechas Autónomas (CEDA), a coalition of largely Catholic conservative groups and Monarchists. Led by José María Gil-Robles, the CEDA soon allied itself with the close runner up of the elections, the Radical Republican Party, led by Alejandro Lerroux.

Pushing Lerroux into the position of prime minister so as not to offend liberal sensibilities in the Constiuent Cortes (many liberals were wary of the often ultra-reactionary platitudes of Robles), the CEDA and the Radical Party soon found themselves embroiled in internal strife. Finding itself the focus of these disputes, the Lerroux cabinet soon collapsed on itself, only to be replaced by another Radical, Ricardo Samper.

Continuing until the next year, the conflict within the coalition soon came to a head with the opening of the Cortes on October 1, 1934. After having denied cabinet positions to the CEDA for nearly a year, the Radical Party saw the Samper government collapse after a campaign of intense pressure from the right. Asked to form a new cabinet by the president, Lerroux had no choice but to give three ministries to the CEDA.

Concerned by what they saw in government as the first steps on the road to fascism, the socialists of the Partido Socialista Obrero Español (PSOE), and its industrial wing, the Unión General de Trabajadores (UGT), began to put forward proposals for an alliance of the leftist parties and workers organisations of Spain. This Alianza Obrera (Workers Alliance), similar in form to the Popular Front tactic that was to be employed by leftists across Europe throughout the 1930s, was met with disdain by the powerful anarcho-syndicalist union, the Confederación Nacional del Trabajo (CNT). Wearisome of previous short-lived coalitions with the often opportunistic socialists, the CNT on the whole had come to regard large-scale cooperation as ill-fated, although some moderate sections of the union were more enthusiastic about the prospect of a new alliance.

Deciding on a response to the appointment of the three CEDA ministers, a general strike was called by the UGT in the name of the Alianza Obrera. The CNT, mistrustful of their socialist counterparts, greeted the call with aloofness. Nevertheless, the night before the proposed strike saw many CNT workers centres across Catalonia raided with hundreds of anarchist militants being taken away by the police. Efforts to reopen union buildings by force in Barcelona were repelled by armed groups of escamots, the paramilitary youths of the Esquerra, Catalonia’s leading nationalist party. Dencàs, leader of the Esquerra, soon after denounced the anarchists and urged police and escamot forces to take action against them. Disenchanted with the strike and suffering repeated attacks from the police, the CNT ordered its members back to work, forcing the collapse of the strike in Catalonia.

The strike was not faring much better in other parts of the country. Owing to poor coordination and swift police action, the entire socialist leadership had been arrested in Madrid before the strike could take off. Following this, the poorly armed CNT workers in the capital were left largely to their own devices. Repeated attacks from the police and the unwillingness of the socialist committees to coordinate effectively forced them back to work. A suspicious interception by government troops of much needed arms heading towards Madrid only added to CNT mistrust towards the socialists.

While the strike was falling apart across Spain, workers of the mining towns of Asturias were taking up what little arms they had, intent on carrying the strike through. The province had long been a UGT stronghold, although the CNT also exercised a considerable influence of its own. Widely seen as being on the moderate wing of the union, the Asturian CNT had for many years been at the forefront of calls for CNT-UGT collaboration. The perhaps lack of antagonism (in comparison to relations between the unions in other parts of the country), and history of common action in Asturias contributed very much to the high levels of cooperation between miners of both organisations during the insurrection.

The strike began on the evening of October 4, and by nightfall the miners had occupied towns along the Aller and Nalón rivers, attacking and seizing local Civil and Assault Guard barracks. The next day saw columns of the miners advancing along the road to Oviedo, the provincial capital. With the exception of two barracks where fighting with government troops continued, the city was taken by October 6.

The following days saw many outlying towns captured amidst heavy fighting, including the large industrial centre of La Felguera. Many of these saw the formation of town assemblies or ‘revolutionary committees’, and it was in these bodies that practical differences between the socialists and anarchists became apparent. In areas under CNT control, popular assemblies of industrial workers (or peasants in rural areas) were formed, organising such things as food distribution. In contrast, areas under socialist control were characterised by highly centralised committees which kept any decision making largely in the hands of the local UGT bureaucracy. Often excluding CNT delegates to their committees, the determination of the socialist leadership to keep the strike strictly under their control significantly contributed to the defeat of the revolt in Asturias. Despite this, the willingness of UGT rank-and-file workers to cooperate with their counterparts in the CNT was demonstrated continuously throughout the uprising.

On October 7, delegates from the anarchist controlled seaport towns of Gijón and Avilés arrived in Oviedo requesting urgently needed weapons to defend against a landing of government troops. Ignored by the socialist committee, the delegates returned to their town empty handed. Lacking even the basic arms needed to defend against the attacking troops, Gijón and Avilés fell the next day. Constant attacks out of the two ports over the coming week sealed the fate of Asturias, and the uprising was savagely crushed. 3,000 miners had been killed in the fighting, and another 35,000 taken prisoner during the wave of repression that followed.

Lasting just over two weeks, the insurrection displayed clear differences between two very different forms of socialism when practically implemented. One observer noted the contrast between the socialist-run town of Sama, and anarchist-run La Felguera;

“The October Insurrection triumphed immediately in the metallurgical and mining town…Sama was organised along military lines. Dictatorship of the proletariat, red army, Central Committee, discipline, authority…La Felguera opted for comunismo libertario: the people in arms, liberty to come and go, respect for the technicians of the Duro-Felguera metallurgical plant, public deliberation of all issues, abolition of money, the rational distribution of food and clothing. Enthusiasm and gaity in La Felguera; the sullenness of the barracks of Sama.”

Acting as a precursor to events that were to grip Spain in the coming years, the actions of the Oviedo Committee in 1934 served as a tragic parallel to the attitude of the Popular Front government towards the anarchists in the early months of the Civil War. However, the cooperation displayed between the workers of both organisations during the uprising served to demonstrate, albeit on a far smaller scale, the spirit of brotherhood that was to grip workers across Spain just less than two years later, when revolution would sweep the country.