The government stripped away our civil liberties overnight. But we won’t back down 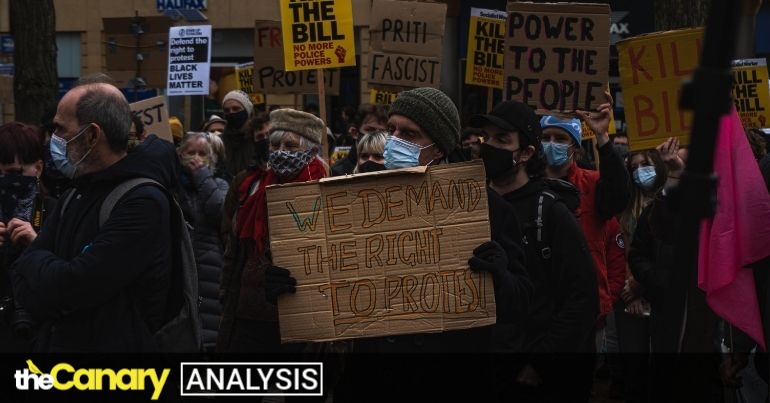 On 27 April, a series of authoritarian and discriminatory bills passed through parliament. Having been granted royal assent on 28 April, the Police, Crime, Sentencing and Courts Bill; Judicial Review and Courts Bill; and Elections Bill  became law. This comes after a year of parliamentary “ping-pong” and widespread resistance to these oppressive bills.

The controversial Nationality and Borders Bill and Health and Care Bill are also due to become law on 28 April.

Each piece of legislation increases the government’s power while chipping away at our civil liberties and decreasing our ability to hold the state to account. The passage of these bills is devastating, but we must continue to fight for our fundamental freedoms.

In spite of widespread opposition led by Sisters Uncut and the Kill the Bill coalition, both Houses of Parliament approved the Police, Crime, Sentencing and Courts Bill. It became law on 28 April.

Calling this a “dark day for civil liberties in the UK”, Amnesty International CEO Sacha Deshmukh said that it:

places profound and significant restrictions on the basic right to peacefully protest and will have a severely detrimental impact on the ability of ordinary people to make their concerns heard.

This includes a ban on noisy protest and the introduction of other rules designed to limit effective protest. However, this does not mean a blanket ban on protests – we can still take to the streets to challenge the law.

The new legislation also includes increased police powers and protections, harsher sentencing, new rules on trespass, and the introduction of ‘secure schools‘. It will disproportionately impact the most marginalised people in society, including Black and brown people; Gypsy, Roma, and Traveller people; and sex workers.

Both Houses of Parliament have approved the Health and Social Care Bill, and it is awaiting royal assent. This bill seeks to accelerate NHS privatisation

The Elections Bill also received royal assent on 28 April. This means that the Electoral Commission – the watchdog responsible for holding UK governments to account on electoral matters – is no longer an independent body. As reported by the London Economic, this:

could now give ministers new and unchecked powers over the elections regulator, undermining free and fair elections in the UK.

This is an open attack on democracy.

The government’s controversial plan to introduce voter ID is included in this bill. In effect, this is a tool for voter suppression, as over 2 million people don’t have the required ID under the new law.

The Judicial Review and Courts Act also became law on 28 April. Campaigners have warned that the new legislation will make it harder to challenge the government in court, depriving vulnerable people of access to justice. This could include people challenging life-threatening deportations or those fighting against the unlawful denial of their benefits.

More in the pipeline

The Nationality and Borders Bill passed through parliament on 27 April, and is set to become law. This includes plans to detain and process asylum seekers overseas, and to empower the Home Office to remove people’s British citizenship without notice.

United Nations High Commissioner for Refugees Filippo Grandi has warned that when it becomes law, the anti-refugee legislation will relegate asylum seekers to second-class citizenship in the UK. Other human rights bodies have accused the government of ‘abandoning its responsibilities’ under the international Refugee Convention.

The Health and Care Bill is also awaiting royal assent before becoming law. Through this bill, the government seeks to accelerate NHS privatisation.

Warning against the ‘catastrophic’ impact the legislation will have on NHS patients and staff, Keep Our NHS Public co-chair and retired paediatrician Dr Tony O’Sullivan said:

This is an Act of intent, deliberately breaking up the NHS and facilitating the spread of parasitizing private interests, looking to make billions from funding for public services.

O’Sullivan adds that the new legislation will limit patients’ access to free and safe care, with care costs putting some at risk of losing their home. This will inevitably hit the poorest hardest.

But wait, there’s even more

When parliament returns in summer, the government will try to push through its Online Safety Bill and human rights reforms.

The Bill is an extremely complex and incoherent piece of legislation that will undermine freedom of expression and information, privacy and the rule of law and will ultimately be ineffective in achieving its stated goal of making the Internet a safer place.

Through the bill, the government seeks to clamp-down on ordinary people’s right to free speech, and to increase surveillance of our online activity.

Meanwhile, as barrister David Renton explains, the government’s proposed reforms to the Human Rights Act would essentially “make rights harder to enforce”. The act has helped a wide range of groups in their quest for justice and accountability, from the Hillsborough families to people fighting evictions.

The proposed changes to the Human Rights Act would put barriers in the way of human rights claims, and limit our ability to seek justice from the state. This is particularly true for marginalised and working class people looking to hold the state to account.

While the government continues to attack us on all fronts, our ability to defend our rights could not be more important.

The passing of these authoritarian and discriminatory bills shows that electoral politics won’t save us. Now more than ever, we must take to the streets and organise on the ground to seize our civil liberties and create the society we want to live in.

Those who tirelessly organised against the government’s repressive bills are still hard at work, and committed to bringing about the changes we need to see.

Feminist direct action group Sisters Uncut and Operation Withdraw Consent coalition members are urging the public to withdraw consent from policing and make the policing bill unenforceable. Join your local copwatching group to monitor and disrupt policing in your community.

Meanwhile, Refugee Action is building a movement to repeal the anti-refugee laws. Grassroots abolitionist group SOAS Detainee Support – which has been working in solidarity with detained people against the anti-refugee bill and policing bill – is welcoming new members.

Elsewhere, groups such as We Own It  and Keep Our NHS Public have committed to fighting NHS privatisation.

This week’s losses should energise us all to organise against the fascist state and its institutions. Freedoms are won on the streets. Resistance is built by communities. Our only hope for the future lies in widespread grassroots resistance. So tell your friends, family, and neighbours to get involved. We need everyone on board if we are to build a fair and just society.