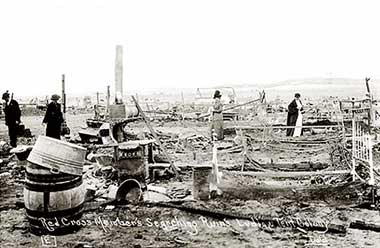 Issues concerning labour had dogged the United States
for many years preceding World War I and had resulted in widespread strike
action, especially in the West of the country. Tensions rose to a melting
point when a union activist was killed in late 1913 resulting in workers at
the Rockefeller family owned Colorado Fuel and Iron Corporation’s (CF+I)
going on strike. Miners evacuated the coal camps on September 23rd in protest
against low wages, poor working conditions and continued victimisation of
union activists. This was to mark the beginning of what was to be a harsh
seven months of continued brutality and repression at the hands of their bosses.

Miners of the CF+I were paid $1.68 a day and were forced
to work in extremely harsh conditions, this was particularly true for the
Colorado miners, where fatality rates were often double the national average.
What little wages the miners earned were paid in scrip, which was redeemable
only at the company store where prices were high.

Attempts of unionisation by the Colorado miners dated
back to the first strike of 1883 in which they tried to join the Western Federation
of Miners, in 1913 they were attempting to organise into the United Mine Workers
of America. (They later joined the Industrial Workers of the World in 1927.)

Demands of the UMWA to the CF+I were as follows:

“…Recognition of the United Mineworkers of
America as the bargaining agent for workers in coal mines throughout Colorado
and northern New Mexico, an effective system of checkweighmen in all mines,
compensation for digging coal at a ton-rate based on 2,000 pounds, semi-monthly
payment of wages in lawful money, the abolition of scrip and the truck system,
an end to discrimination against union members, and strict enforcement of
state laws pertaining to operators’ obligations in supplying miners
with timbers, rails, and other materials in underground working places.”

The demands of the union and the continuing strike action
enraged the Rockefeller family, which through mine ownership effectively ruled
the region. They evicted striking workers from their company owned homes leaving
them (along with their families) to face the harsh Colorado winter months
without shelter. Assisted by UMWA groups across the US, the strikers organised
‘tent cities’ close to canyon mouths which lead to coal camps
(in an attempt to block strike-breakers replacing them) and continued their
strike.

Through various agencies the company was able to hire men to take a more aggressive
stance against the striking workers, armed guards were supplied to harass
strikers and union organisers. An armoured car with a mounted machine gun
was even built which was appropriately named the ‘Death Special’
by the company guards. As tensions escalated between CF+I and the strikers,
miners dug protective pits beneath their tents to shield themselves and their
families against random sniping and machine gun fire from the company guards.
On October 17th the ‘Death Special’ was used to attack the Forbes
tent colony resulting in the death of one miner. A young girl was shot in
the face and another boy’s legs riddled with machine gun bullets also.
Confrontations between striking miners and scab workers were also resulting
in additional deaths. On October 28th the Governor of Colorado, Elias M Ammons
called out the National Guard to take control of the situation.

The miners however, persevered. Union members and organisers
were kidnapped and beaten, shots being fired into the camps from strike-breakers
and the National Guardsmen were a constant occurrence and the harsh winter
was taking its toll. Worried about the continuing cost of keeping the National
Guard in the field, Governor Ammons accepted an offer from the Rockefeller
family to put their men in National Guard uniforms.

On March 10th the body of a strike-breaker was found near
railroad tracks near the Forbes tents and the National Guard’s General
Chase ordered the colony to be destroyed. The strike was reaching a climax,
and National Guardsmen were ordered to evict the remaining tent colonies around
the mines, despite them being on private property leased by the UMWA.

Ludlow was the largest of the colonies, and on the morning
of April 20th 1914, troops fired into the camp with machine guns, anyone who
was seen moving in the camp was targeted. The miners fired back, and fighting
raged for almost fourteen hours.

In the afternoon, a passing freight train stopped near the camp and allowed
many miners and their families to escape to east to an area known as the ‘Black
Hills’. After many hours of exchanging fire with the militiamen, the
camps main organiser, Louis Tikas met with Lieutenant Linderfelt (the officer
in charge of the National Guard assault on the Ludlow camp) to arrange a truce.
Linderfelt hit Tikas with the butt of his rifle and soldiers fired several
times into his back as he lay on the ground, killing him outright.

That evening, under cover of darkness, the militiamen
entered the camp and set fire to tents, killing two women and eleven children
who were sheltering from the shooting in a pit below a tent, thirteen other
people were also shot dead during the fighting.

As news of the massacre spread, workers from around the
country went on strike to show solidarity with the remaining miners on strike
in Colorado and to express sympathy for those who had lost loved ones in Ludlow.
Several cities in the state were taken over and occupied by miners and some
National Guard units even laid down their arms and refused to fight.

However, the workers failed to obtain their demands along
with union recognition and many were replaced with non-union workers. No National
Guardsmen was ever prosecuted over the killings, even though sixty-six people
had been killed by the time violence ended.

In 1918 a monument was erected to commemorate those who
died during the strike. These individuals all died in the Ludlow Massacre,
and are inscribed on the monument as follows:

By Sam Lowry, edited by libcom