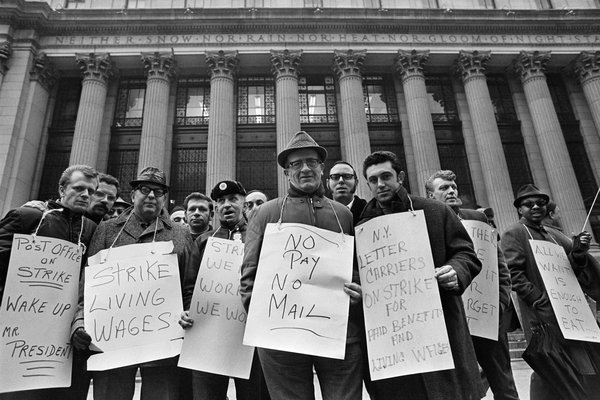 If you enjoyed this book, please purchase Strike! by Jeremy Brecher here.

The independent action of discontented workers across the US from the late 1960s has not just been limited to single workplaces; we have seen a series of national strikes independent of the official labor movement. Perhaps the most dramatic of these-and the recent event most resembling the pattern of past mass strikes examined in the book, Strike! – was the postal wildcat of March, 1970, the first major strike in the history of the Post Office, indeed of the Federal government.

A government study in 1968 had reported “widespread disquiet” among postal workers as a result of “antiquated personnel practices. . . appalling working conditions . . . and limited career opportunities. . .”1
The explosion finally came in New York City, where high living costs forced many mailmen onto welfare to supplement incomes eroded by the inflation of the late 1960’s, and where several small wildcats had already been pulled, such as a “sick-out” the year before by seventy-two or more employees at the Kingsbridge Station in the Bronx.2
Letter carriers voted March 17th, 1970, to strike, and set up picket lines around the city’s post offices which were honored by 25,000 drivers and clerks, bringing postal operations to a standstill. The strike began to spread almost instantly, with workers throughout New York State, New Jersey, and Connecticut joining within a day or two. The strikers organized themselves through informal channels; by March 19th, the New York local said it had received unsolicited telephone calls from letter carriers in fifty-eight communities in a number of states saying they would join the strike.3

Government and union officials moved quickly against the strike. The walkout was of course illegal from the start, since it is a felony for government employees to strike, and the courts quickly issued an injunction against the New York strikers. James Rademacher, head of the letter carriers union, announced he would send a telegram to Gus Johnson, president of the New York local which launched the strike, warning that the union’s executive council was considering expelling the local because of its strike action, which was contrary to union policy. Johnson in turn urged members to go back to work.

Postmaster General Blount stated that national leaders of the postal unions had assured the Post Office of their cooperation.4

The government also promised concessions if the wildcatters returned to work. On March 20th, “The Administration won an agreement from postal union leaders . . . to urge their striking workers back to work in return for prompt consideration of their demands.”5
That night, however, 6,000 mailmen in Chicago – the postal system’s central distribution point-ignored Rademacher’s urgings and voted to join the strike, and the next day New York postal workers “voted almost unanimously to defy their leaders and the back-to-work agreement”:

Branding their national union leaders “rats” and “creeps” for urging a return to Work, the rank and file . . . roared their refusal to accept the proposed settlement.

Signs behind the rostrum in a Manhattan armory where the employees met read “Hang Rat-emacher” and “We won’t take rat poison.” An effigy of the union president hung nearby.6

Rademacher nonetheless predicted that “reason will prevail over emotion. . . and ninety percent of the mail will be moving on Monday.”7
But the action of the New York letter carriers had crystallized discontent throughout the country; by March 21st, the strike had spread to more than 200 cities and towns from coast to coast, including Chicago, Detroit, Philadelphia, Cleveland, Pittsburgh, San Francisco, Minneapolis, Denver and Boston. “We’re very close to paralysis,” said a Post Office official. “What is still functioning is hardly worthy of calling a postal system.”8
At the Post Office’s emergency command center, “increasingly thick clusters” of flashing red lights indicating struck areas blinked in twelve states. “No blue lights-indicating struck areas where employees were returning to work-flashed on the big map.”9

Even more alarming, the strike seemed on the verge of spreading to other government employees. John Griner, head of the American Federation of Government Employees, reported that he had to intervene personally to prevent several strikes by his locals.

Nathan Wolkomer, head of the National Federation of Federal Employees, said that N.F.F.E. locals throughout the country had indicated that they wanted to strike in support of the postal workers.10

“There’s no doubt that our members are in complete sympathy with the postal workers. The strike definitely could spread throughout the Federal service.”11
Alan Whitney, vice-president of the National Association of Government Employees, reported that “tremendous pressure” was being put on the union to authorize strikes, especially in “one of our biggest locals whose primary duty is to supply our war effort in Southeast Asia.” Whitney added,

We have been receiving phone calls from our various local presidents in various agencies throughout the government and throughout the country. They have watched events of the past days and have seen postal workers striking with a degree of impunity, and their question to us is, if they can do it, why can’t we?12

The union leadership was able to head off any spread of the strike beyond the postal workers, but the groundwork was nonetheless laid for future strikes of government employees. As one government strike advocate was quoted in the Washington Star, “We’ve learned from the postal workers that if practically everybody strikes, then nobody is going to be hurt. . . After all, they can’t fire everybody.”

The postal strike itself, meanwhile, continued to hold. In most cities, other postal workers refused to cross letter carriers’ picket lines, ignoring another plea from the Administration and from the seven major postal unions that they return to work.13
In all, over 200,000 postal workers in fifteen states joined the wildcat. They ignored injunctions throughout the country.

And so the President, turning to his last resort, declared a national emergency and ordered the U.S. Army and National Guard into New York to break the strike at its most militant point. In a nation-wide television address, he echoed Grover Cleveland’s declaration in sending Federal troops to break the 1894 Pullman strike that “the mails must go through,” and stressed that the postal workers were striking “not only . . . against the best interests and the best traditions of their service, but against the recommendations of their national union leaders.”14
Soon some 25,000 state and Federal troops arrived and began to sort the most pressing commercial mail, whose stoppage had threatened to close business and even the stock exchange. Though the Administration maintained its stance of refusing to negotiate until the postmen returned to work, Congressional spokesmen emphasized that they would act immediately on pay increases as soon as the strike was over.

In the midst of this squeeze play, Rademacher called 500 local union officials to Washington. These officials recognized that the strike was being forced to a close, but ordered Rademacher to call a new nation-wide strike unless their demands were quickly met. A week after they had struck, the mailmen returned to work and negotiations began, with the New York local constantly threatening to trigger another strike, even calling a rump meeting of local leaders throughout the country to discuss plans for a slowdown.15

In strictly financial terms, the strike was a modest success, forcing Congress to grant an immediate six percent pay increase to all government workers and an additional eight percent for postal workers on passage of the postal reorganization plan. It also represented a new stage in the current action of American workers.

The strikers did not play by the rules of the game. The risks they took were considerable. Striking against the government is a felony, punishable by a year and a day in jail and a $1,000 fine.16

For the unions, opposition to the strike was a matter of institutional survival. Rademacher warned that continuation of the strike would put the union “practically out of business,” since government unions whose members strike lose their right to the dues checkoff by which members’ union dues are automatically collected by the employer. Fortunately, for the union officials, the government was fully aware of union efforts to break the strike, and therefore tried to strengthen its hand. Indeed, in the new postal reorganization, the government has gone out of its way to build the authority of the major unions that supported it against the postal strikers in 1970.

Excerpted and slightly edited to make sense as a stand-alone text from Strike! – Jeremy Brecher