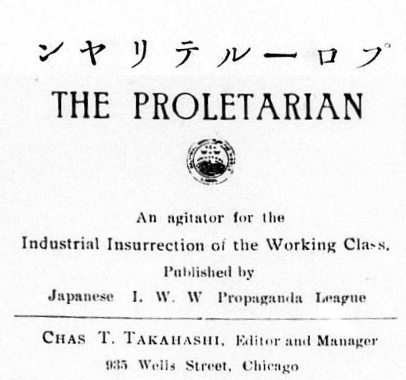 The Proletarian was a short-lived IWW affiliated published in Chicago by Takeshi Takahashi from 1909-1910. From its second issue, it was bilingual in English and Japanese. Attached are PDF scans of its first four issues, originally held at the International Institute for Social History in Amsterdam. An excel spreadsheet containing transcriptions of the English articles is also attached.

Takeshi came to America already a “disciple of [Denjiro] Kotoku,” a famous early Japanese Anarchist who briefly organized in San Francisco and was later murdered by the state accused of orchestrating a plot to assassinate the emperor.1
Takahashi and soon tried to organize a Chicago branch of the japanese immigrant anarchist organization the Kotoku had helped start in San Francisco, Socialist Revolutionary Party. In Chicago he also collaborated with Japanese Socialist Kaneko Kiichi. His fascinating and tragic life has been recently chronicled by a historian, but she noted that “it is almost impossible now to find an original copy” of The Proletarian and had to rely on a reprinted article for an an idea of its contents.

During the early 1900s, the American Federation of Labor was once again engaged in a union-based racist campaign across the West, with its 1905 Anti-Asiatic League expanding from San Francisco to as far as British Columbia. The newly formed Industrial Workers of the World took an opposing stance, marking the first major challenge from within the “white” working class in the west to this longstanding practice. Japanese immigrants in the West would join many others outside the settler norm in building a platform for anti-colonial and anti-capitalist action within the broader networks of the IWW. This support was not perfect, but would in many ways rock the foundations of global empire.2

After writing reports for IWW papers on Japanese labor struggles in Hawaii, Takeshi found an IWW-affiliated newspaper with the goal of both propagandizing Japanese workers and convincing white workers to stop their discrimination.

The short-lived nature of the publication is one evidence. The Proletarian would not last long past its fourth issue, the last in this series. Even then was having trouble putting out a timely releasing. It received attention in a few radical periodicals like Mother Earth (which he had supported), The Progressive Woman published by Josephine Conger-Kaneko with her husband Kaneko Kiichi, and even the Berlin Vorwärts.3
The first two noted its important content, but also the need for subscriptions.

There seems to have been no avalanche of support from white wobblies eager to educate themselves. The Japanese immigrant radical community may have had trouble sustaining more than their small existing California publications given ongoing repression, and even these would fold. The passionate appeals written in English nevertheless make for some compelling reading and might be useful to other historians.

Unfortunately, this uploader doesn’t know the language, so cannot speak to the to the Japanese half of the text. Whether it is simply the same as the English or original content someone else will have to say. Any information would be greatly appreciated!

The struggle against the state and other essays

Than Soe Naing: a dissident communist from Burma