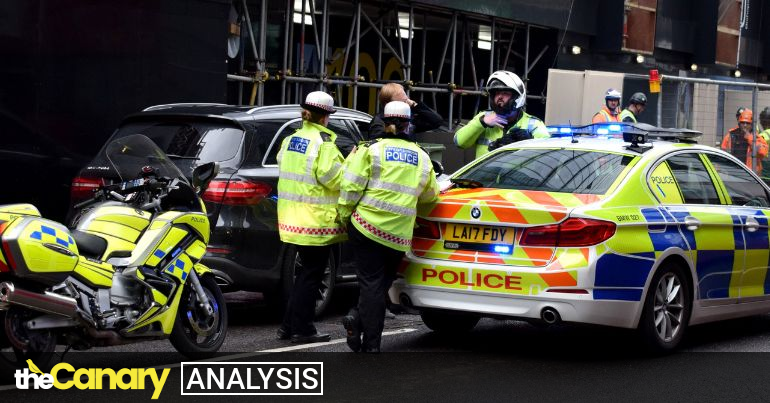 On 14 July, the Department for Education (DfE) published new guidance on strip searching children in schools. This follows the safeguarding review on the strip search of schoolgirl Child Q, which urged the department to revise its guidance for schools.

The new guidance urges school staff to advocate for pupils and to consider their mental and physical wellbeing when thinking about calling the police. But its allowance of strip searches on school grounds undermines its purported goal of keeping children safe.

We must demand an end to the police’s use of this degrading and humiliating practice, especially against children. Ultimately, we need to seek safe and supportive ways to deal with the issues that impact children’s lives.

In March, a safeguarding review revealed that two Metropolitan Police officers conducted a strip search against a Black schoolgirl, known as Child Q, while she was on her period. The search took place on school grounds with her teachers’ knowledge but without an appropriate adult present.

Police stripped the child and forced her to expose her “intimate body parts”. They made the child remove her sanitary pad, and didn’t let her wash before returning to an exam.

Teachers and police subjected Child Q to this dehumanising treatment because school staff wrongly suspected her of carrying cannabis. The safeguarding review concluded that “Child Q should never have been strip searched”.

Speaking to the devastating impact of her experience, Child Q told the safeguarding review panel:

I don’t know if I’m going to feel normal again… But I do know this can’t happen to anyone, ever again.

In May, it was revealed that Met police also strip searched a 15-year-old mixed-race Black girl. This girl, known as Olivia, was also on her period at the time. Olivia attempted to take her own life following this traumatic incident.

The police watchdog is investigating 10 other cases of officers strip searching children.

These are not isolated incidents

In February, a freedom of information (FoI) request by researcher Tom Kemp revealed that the Metropolitan Police’s use of strip search was on the rise.

The researcher found that Black people were overrepresented in those targeted with strip search. Kemp also noted a concerning number of children included in these figures.

The figures reveal extreme racial disproportionality in officers’ use of the degrading tactic. Over half of the children strip searched during this period were Black. 75% – amounting to 607 children – were from racially minoritised backgrounds. Only one in five were white.

As was the case for Child Q, police conducted most of these searches due to suspected criminalised drug offences. Officers took no further action in just under half of these cases. This reflects the harmful and ineffective nature of racist ‘gangs’ and ‘county lines’ policing, which racially minoritised young people bear the brunt of.

The DfE’s newly published guidance on searching, screening and confiscation for schools comes after the Child Q safeguarding review urged the department to revise its guidance.

But the new guidance creates an alarming narrative that in some cases, it’s ok for police to strip search a child.

the guidance presumes that the use of strip searches is something that should even be allowed in schools.

The barrister raised concerns that the guidance sets out vague recommendations for school staff. For example, the guidance states that staff should “advocate for pupil wellbeing”. But it offers no guidance on how teachers can actually enact this.

Once the police have been called and arrive at the school gates, the guidance puts teachers in the passive position of merely “advocating” for the safety of the pupil but offers no explanation for what that means.

The barrister was keen to note that head teachers have statutory powers to refuse entry to the police and can order officers to leave school grounds. This vital information is not included in the DfE’s guidance.

Etienne added that the guidance does little to clarify the difference between a strip search (the removal of outer clothing) and an intimate search (the exposure and/or inspection of intimate parts of the body).

That is particularly important given that some of what is reported to have happened to Child Q is likely to amount to an intimate search.

The guidance also fails to mention the adultification bias – the racist perception and treatment of Black children as adults. Adultification played a key role in Child Q’s devastating case.

Highlighting the need for cultural and structural transformation to ensure that what happened to Child Q doesn’t happen again, Etienne said:

Overall, the guidance will do nothing to change the culture of deference between schools and police officers. Teachers are essentially cast as observers. That is typical of the culture that enabled the strip search of Child Q.

The DfE’s response is rushed, superficial and still stubbornly rooted in a dependence on criminal justice responses to issues of child safety.

Strip search can never be safe

In the wake of Child Q’s humiliating experience, a coalition of groups working to end strip search emerged.

The End Strip Search coalition, which includes 4FRONT, Kids of Colour and No More Exclusions, asserts that the practice can never be safe. It states:

Even when ‘safeguards’ are in place, like parents being notified or an appropriate adult acting as a witness, the strip search experience is still one of trauma. A child is always traumatised, whether protocol is followed or not.

Nothing a child could hide in their body is worth them being sexually assaulted. Whether something is found or not, a child is harmed in a way that has deep ramifications for their mental health, and their future. There is no justification.

Indeed, there are no circumstances in which a child can be protected from harm while being strip searched – or even threatened with strip search – by police. With this in mind, the allowance of strip searches in schools in the DfE’s new guidance undermines the very concept of child safeguarding.

How you can help

We must call for an immediate end to the traumatic and dehumanising practice of strip search, particularly against children. Those looking to join the campaign can sign up for updates on actions, events and opportunities to get involved via the End Strip Search website.

In the meantime, it is vital that adults are prepared to limit children’s contact with police, and to fiercely advocate for children during police interactions when they happen.

Teachers – don’t invite police onto school grounds. Police are not equipped to prevent harm or to deal with the complex social issues that impact children’s lives. Their job is to criminalise.

For the rest of us, this means resisting the presence of police in schools and intervening in every police stop we witness on the streets. It means withdrawing consent from all forms of policing. And it means demanding funding for specialist services that support vulnerable children and young people.

More broadly, we must create a culture in which we keenly listen to children’s experiences of policing – and believe them. It’s time we start treating children with respect, not suspicion.