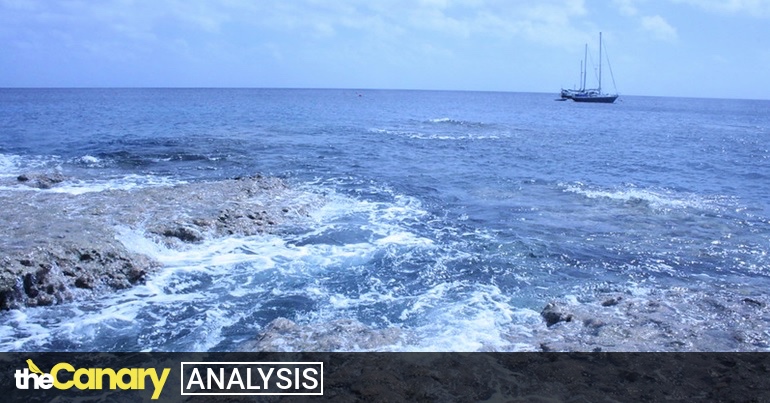 The small island nation of Niue aims to protect 100% of the ocean it has jurisdiction over, according to the Guardian. Its plan to do so contrasts sharply with the UK’s ocean-focused efforts. As the same publication recently pointed out, the UK is failing to safeguard even its already designated ‘protected’ areas.

In short, Britain is not so ‘great’ when it comes to ocean protection. It’s lagging far behind teeny nations like Niue, despite having far more resources at its disposal.

Coastal nations have territorial rights over a certain amount of the ocean surrounding them, beyond their territorial waters. This is known as an Exclusive Economic Zone (EEZ). The Guardian reported on 30 May that Niue has introduced a plan to protect 100% of its EEZ.

The plan, which has been in force since April, involves the creation of a “multiple-use” marine park. The country has zoned different parts of the park for specific purposes. It’s banned fishing in some zones, allowed small-scale fishing and recreation activities in others, and has a set area for commercial fishing. There’s also a “conservation zone” that boats can pass through but not dally in.

As Mongabay highlighted, the Cook Islands passed an Act in 2017 that laid out a similar 100% protection plan for its waters.

Compare Niue’s efforts with the UK. According to the Joint Nature Conservation Committee, an advisory body, the country has designated 36% of its offshore waters as Marine Protected Areas (MPAs). But analysis shared with the Guardian suggests that these are little more than ‘paper parks’, meaning protected in name but not in practice.

Global Fishing Watch and Oceana provided the analysis to the Guardian. They found that bottom trawling and dredging is taking place in over 90% of the UK’s offshore MPAs. Bottom trawling is a highly destructive form of fishing favoured by big commercial vessels – supertrawlers – that involves dragging weighed nets across the seabed.

The data showed that in 2021, “fishing with bottom-towed gear” took place in no less than 58 of the 64 offshore MPAs designated as “benthic”. As the Guardian explained, these MPAs are specifically meant to “protect species that live on the seabed”.

Responding to the findings, a Department for the Environment, Food and Rural Affairs (DEFRA) spokesperson listed the fishing-related changes since Brexit. These include an upcoming ban on trawling in four MPAs; possible management changes in 13 other MPAs; a seafood fund to promote “innovation and sustainability”; consultation on a joint fisheries statement; and the “landmark Fisheries Act 2020”.

There’s the way but not the will

Of the upcoming trawling ban, Greenpeace’s Will McCallum said:

It’s taken two years [since Brexit] for the government to introduce trawling bans on four MPAs. The whole thing is taking too long and at the end, you have a ban on a single gear type – bottom-towed gear. But, in theory, a supertrawler could go straight though it.

Greenpeace has regularly fought against the government’s permissive attitude towards destructive fishing. In 2020 and 2021, for example, it dropped boulders into some MPAs to literally stop bottom trawlers in their tracks. The government’s Marine Management Organisation (MMO) responded by taking Greenpeace to court, a case it has since dropped.

That reaction is unsurprising in light of the Conservatives’ resistance to strengthening fishing laws. In 2020, Conservative MPs successfully defeated proposed amendments to the Fisheries Bill, the precursor to the aforementioned ‘landmark’ Act. These amendments were to keep fishing quotas within sustainable limits based on scientific advice and to ban supertrawlers in MPAs.

In short, the government appears to lack the will to take meaningful action to protect the ocean, despite being well equipped to do so. As Greenpeace has highlighted, the MMO issues licences to bottom trawlers and has the power to:

Niue has the opposite problem. It appears to have the will to comprehensively protect the surrounding ocean, but lacks the means to do so entirely independently. It is a small island nation that is self-governing and, like the Cook Islands, maintains ‘free association‘ with New Zealand. As such, it’s reliant on neighbours, like other islands and New Zealand, to help police its waters. Global Fishing Watch also assists with monitoring of the marine park through satellite surveillance.

Niue and other island nations clearly aren’t short of the right ideas though. Over-fishing is one of the top threats to the ocean, of which there are many. Stringently protecting the ocean from it is essential.