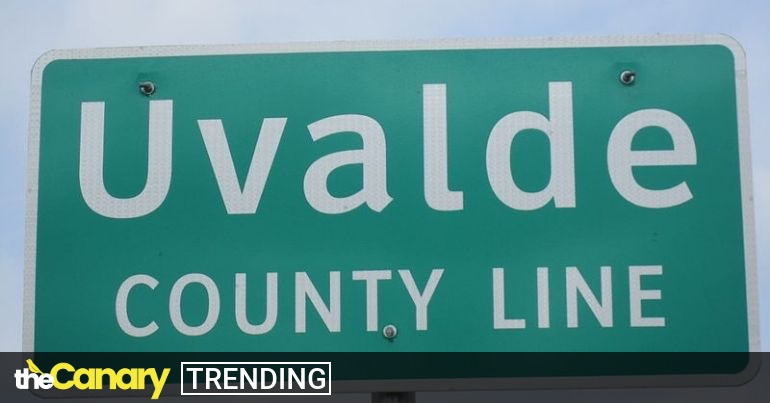 21 people have been killed in America’s latest school massacre. The shooting spree at an elementary school in the town of Uvalde in Texas has once again sparked a debate about the US’s gun laws. However, it has also raised questions about policing in the US – particularly about the militarised nature of Special Weapons and Tactics (SWAT) teams.

Uvalde’s own SWAT team, it is being claimed, absorbed up 40 percent of the town’s municipal budget. And yet its members did not seem to do enough to intervene as the shootings took place on Wednesday 25 May:

Uvalde is a town of just 16,000 people. But it apparently has a SWAT team.

We’re regularly told small towns need SWAT teams so they can quickly respond to events just like this. The killer was in the building for an hour. https://t.co/lsa2ACcnS8

Pictures emerged of the military-grade hardware the teams use, despite Uvalde being a town of only around 15,000 inhabitants:

This is the Uvalde police SWAT team. This community of 13,000 people spends 40% of its municipal budget on the police. pic.twitter.com/85ipE8kx7H

Other social media users found further images of the town’s cops in military-style gear during training:

Hey, @chadloder I got dozens of pictures of Uvalde showing off their tactical team and training. pic.twitter.com/TQuSvNBH4a

Others posted video of the police stopping desperate parents who wanted to help their kids:

This video make so much more sense now. The cops literally stopped parents from helping their kids. pic.twitter.com/zhQfUjlpjd https://t.co/DqgZUH3uCC

One reporter said that when the panicked parents told the heavily armed police to go into the school and stop the attack, the cops simply refused – to the point that parents wanted to go in themselves:

Cops stood outside the school while the killer rampaged inside.

Onlookers yelled at them to go in. They didn’t. One parent urged bystanders:

“Let’s just rush in because the cops aren’t doing anything like they are supposed to.” @AP story: https://t.co/l2CqPCzmAf

Meanwhile, some marvelled at the amount of the local budget the apparently ineffective police force absorbed:

Uvalde spent roughly $4.1M of their $10.3M operating budget on police. This community doesn’t have much money for other things once they’re done paying the cops. https://t.co/gpR65vB4Ib pic.twitter.com/B7Jw3aTk3V

Another commenter asked what had happened to the supposed ‘Thin Blue Line’, a common trope for the far-right which characterises police as being the last defence between civilisation and barbarism:

It is becoming increasingly clear that LEO on the scene in Uvalde did not go in immediately into the school.Why? All of that firepower,bravery, blue lives matter ish, and they could not protect little children being mowed down unmercifully because WHAT??? https://t.co/si5TailSqj

AP News reported on Thursday 26 May that questions were being asked about why it took 40 minutes to an hour from the start of the attack for the shooter, named as 18-year-old Salvador Ramos, to be shot and killed by tactical teams.

These questions will likely include what exactly the function of heavily armed police is. Especially if, when called upon to intervene with deadly force, they stand on the sidelines arguing with the parents of those under attack.