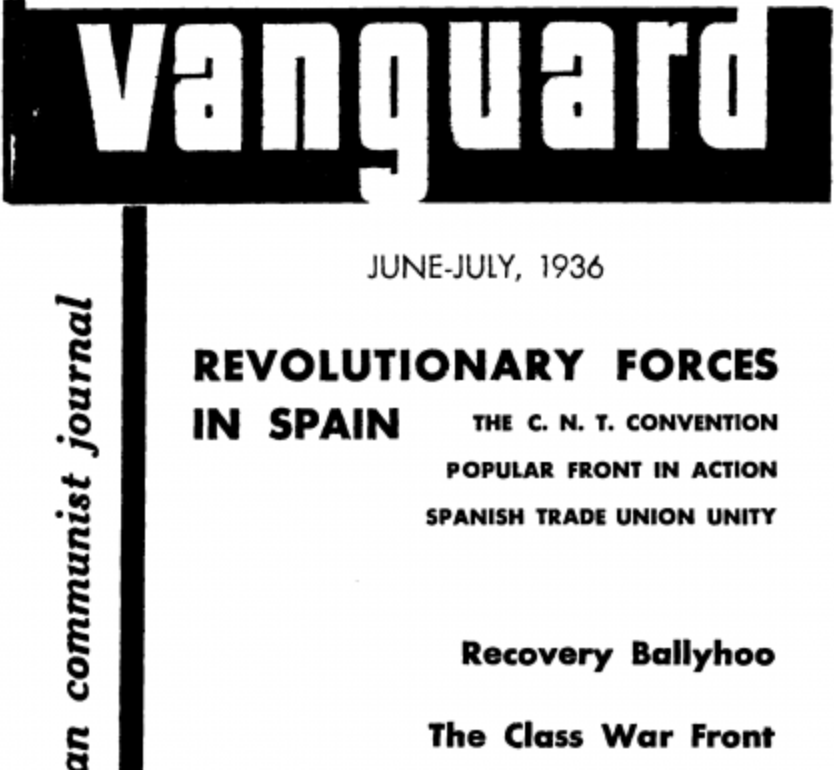 Ed note: These few lines describe what the youthful comrades of the original Vanguard Group set out as their founding perspective in April of 1932. Most of the group members were in their 20s. I believe I recall Dolgoff saying he was the oldest member at age 30. The Group were generally sons and daughters of immigrants or they themselves arrived in America at a young age.

While the language may sound dated, it is anarchist to the core. In time, as the publication matured, so did many of the articles. The Vanguard became a source
for in depth information and theory, written by many renowned militants.

Although the Vanguard Group did not achieve in the development of a movement for the “great historical task of social reconstruction”, it did attempt to initiate a conversation amongst anarchists and syndicalists that through organization and revolutionary ideas anything could be possible.

The tidal wave of the defeat of the Spanish Revolution, the surge in authoritarian communist parties, the rise of centralized and bureaucratic “industrial unionism” and fascism overtook the efforts of a small but heartedly group of revolutionaries.

In the words of The Vanguard Group:

“We are an anarchist-communist group. We are of the opinion that the great struggle for the liberation of the individual from all forms of authority cannot be divorced from the struggle for a socialized economy based on the principles of human solidarity. …

“We call ourselves a Vanguard group. We want to revive here, in America, the great anarchist idea of a revolutionary Vanguard, the anarchist idea of the role and place of an active revolutionary minority in the great mass struggles of today and the near future. The idea of an active revolutionary Vanguard is not a specifically communist idea [Ed note: as meaning Leninist]. The communists distorted it, degraded it to the level of a hierarchical apparatus. We anarchists also believe in the idea of a revolutionary Vanguard, but we do not claim any divine rights to it. We do not claim to be the only true mouthpiece of the dialectical process of historical infallibility; we want to work in free competition with the other groupings and forces struggling for the emancipation of humanity. We want to hold before the genuine and sincere elements of the revolutionary movement of America, the anarchistic idea of such a Vanguard — an association of free, rebellious spirits, united for a common purpose and a common struggle, embodying in their form of association the principles of a free society….

“We are also a youth group. Not that the mere fact of having a majority of its members made up of young people. We don’t set any age qualifications upon entrance into our group; we even welcome older comrades, with better knowledge of the anarchist fundamentals and a riper experience in the movement. But we do want to orient our work upon American youth mainly. We are of the opinion that the anarchist movement of America has woefully neglected the elementary task of building up a youth movement. Cooped up within the confines of little national colonies, broken up and fragmented into water-tight compartments of national movements, it never rose to the realization of the urgency of the youth movement. It could not think in terms of American life. Its future and the place of the anarchist movement in it. It cut out itself off from the source of all hope in the life of any movement —– and immediate contact with the younger generation. …”

The strange story of Nikolai Starostin, football and Lavrentii Beria

It Starts On Your Job: Syndicalist proposals