Who is Nadhim Zahawi? – The Canary 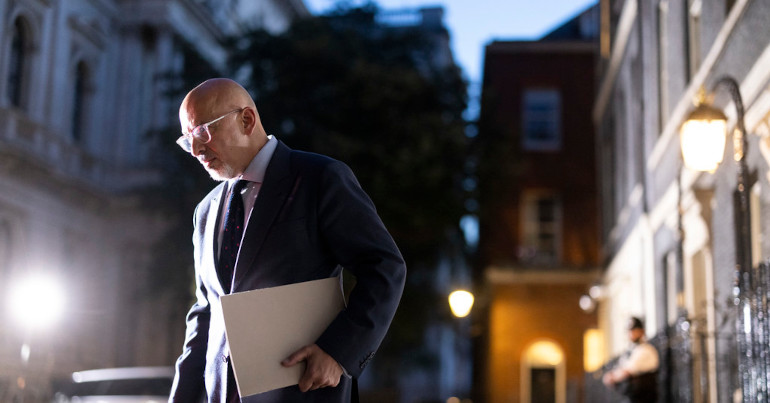 New Chancellor Nadhim Zahawi is mega rich – just like the old one – and like his predecessor there are some serious questions around his taxes, investments and links to big business. Another top Tory serving the interests of the already rich while further impoverishing the poor.

Now it’s the turn of top Tory Nadhim Zahawi to be put under the microscope and examined. You may have heard a lot about him recently – he became the new chancellor hours after the former chancellor Rishi Sunak AND Health Secretary Sajid Javid both resigned in unison.

He’s been a staunch supporter of Boris Johnson, right until the bitter end, and recently launched his own unsuccessful bid to be PM. Like many other Tories, his dodgy tax affairs have also been brought to light – calling into question his suitability to hold high office in the first place.

But what’s his background? And how did he eventually rise to become one of the most senior Conservative members today?

Nahdhim was born in Baghdad, Iraq to a wealthy family in 1967. His father was a businessman and director of an investment company. He was educated early on at expensive fee-paying schools – including Ibstock Palace school, which today charges between 17 and 22 thousand pounds in annual fees. Zahawi later went on to study at University College London, obtaining a bachelor’s degree in chemical engineering.

After setting up the polling company YouGov – yes, THAT YouGov – Nahdhim tried his hand at politics.

After holding a position as a Conservative councillor for Putney from 1997 to 2006 – it wasn’t until 2010 that he would become an MP – representing the Tory seat of Stratford Upon Avon. But it’s Zahawi’s business dealings as an MP that raise the most questions and controversy.

It’s been reported that Zahawi and his wife own up to £100m worth of property internationally, with £25m worth in London alone. This, of course, has led to questions surrounding conflicts of interest in his role as an MP as well as a landlord. In 2016, he was one of the Tory MP Landlords to reject a bill from Labour that would have required all commercial properties to be fit for human habitation. During the expenses scandal, it was revealed that he had charged the taxpayer to heat the horse stables in one of his homes.

But his conflicts of interest aren’t just limited to property.

Among one of Zahawi’s many corporate roles was his stint as chief strategy officer for Gulf Keystone Petroleum – for which he got paid over £20,000 a month. In this role, he also served on the All Party Parliamentary Group (APPG) on  Kurdistan Region in Iraq- which received secretarial support from the Gulf Keystone Petroleum company he was working for.

In addition to all this,  there have been questions about Zahawi’s tax in relation to a Gibraltar-based investment company – Balshore investment – owned by his father. It was reported that in 2018, Balshore sold £26m worth of YouGov shares to an undisclosed person. In the same year, a property company controlled by Zahawi and his wife received an unsecured £26m loan from an undisclosed source – which they used to buy up several properties across the capital.

From his many conflicts of interests to his stomach churning endorsements of Johnson, Zahawi encapsulates the very essence of greed and profit at the expense of the public that Tory ministers are now infamous for.