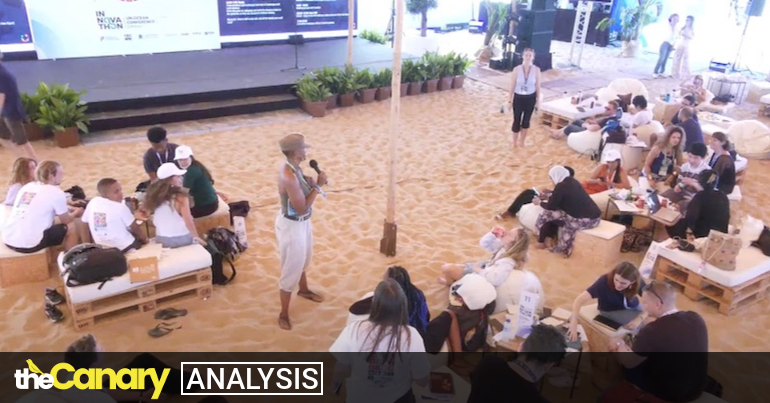 This story was produced as part of the 2022 UN Ocean Conference Fellowship organized by Internews’ Earth Journalism Network with support from the Calouste Gulbenkian Foundation (UK Branch).

One of the first events at the UN Ocean Conference taking place in Lisbon, Portugal was an innovathon for young people. As the UN secretary-general António Guterres said during the occasion, young people are inheriting a deeply troubled planet, thanks to their elders. The innovathon essentially tasked them with cleaning up the adults’ mess.

If the young people at the conference – including those The Canary spoke to – are any kind of example, it appears they stand ready and willing to rise to the task.

The Ocean Conference’s primary focus is propelling the innovative solutions needed to improve ocean and environmental health. Young peoples’ contributions at the event show that unleashing their potential is a vital solution in itself.

The ocean is in dire straits thanks to human-led actions. Guterres said it is the “reception point” of the three environmental crises we’ve created: climate, biodiversity, and pollution. The ocean, for example, is acidifying due to excessive carbon emissions, which is a threat to a great deal of marine life. Moreover, over 90% of the extra heat from global warming ends up in the ocean. This is leading to persistent and extensive warming waters that increase the severity and regularity of marine heatwaves, according to researchers from Universität Hamburg’s Cluster of Excellence “Climate, Climatic Change, and Society” (CLICCS). They recently found one such warming pool, measuring some three million square kilometres, in the northeast Pacific. One of the researchers, atmospheric science expert Dr. Armineh Barkhordarian, explained:

Many ocean-dwelling species, meanwhile, are also diminished and threatened by pollution, overfishing and the activities of the fossil fuel industry.

The innovathon was part of a two-day UN Youth and Innovation Forum ahead of the conference’s official opening. During the 24-hour-long event, 130 youth delegates worked on solutions to the pressing issues for the ocean. According to the UN, their ideas ranged from the study of certain species and their food chains in order to decipher the state of biodiversity, to transforming recovered plastic waste into construction materials.

One of the UK’s youth delegates, Tom Birbeck, participated in the innovathon. Birbeck is a co-founder of an initiative called Arc Marine and told The Canary that the event provided a good opportunity to meet like-minded people who are developing environmentally-sound ideas for tackling key ocean problems.

Birbeck started Arc Marine with fellow diver James Doddrell to tackle reef degradation in England. The company has designed an artificial reef, among other things, that can be integrated into construction practices. In particular, Arc Marine set out to produce a “nature inclusive design” for the offshore wind-energy sector. Effectively, the company has built a plastic-free and carbon-neutral alternative foundation for offshore wind farm infrastructure. The industry typically uses environmentally problematic materials for these foundations, Birbeck said. Arc Marine’s alternative doubles as living space for species in dire need of habitats due to reef degradation.

Get out of the way

During a session on the first day of the official conference, Henk Rogers explained how young people have been instrumental in facilitating the green energy transition elsewhere too. He founded the Blue Planet Alliance in 2020. It aims to get islands and countries around the world to commit legislatively to being reliant on 100% renewable energy by 2045. Hawaii, where Rogers lives, has already made such a commitment. The Pacific island nation of Palau has gone even further, vowing to achieve 100% renewable energy by 2032.

In the event on the importance of listening to young people from Large Ocean States, otherwise known as Small Island Developing States (SIDS), Rogers suggested that Hawaii’s commitment wouldn’t have happened without young people mobilising other citizens and politicians. The Blue Planet Alliance founder argued that the younger generation are more than capable of fighting for their own future. He told The Canary that, in his experience, young people don’t necessarily need their elders’ leadership. Older generations should help young people when they ask for assistance, he argued, but otherwise the former “should get out of the way”.

Birbeck highlighted the sort of assistance that the UK could provide to ensure that renewable offshore infrastructure helps nature restoration. He pointed to the Netherlands, where the government is making some such developments conditional on their enhancement of the marine environment. Birbeck asserted that the UK government should follow suit for all offshore developments in renewable or fossil energy.

When asked what outcome he would like to see at the UN Ocean Conference, the Arc Marine co-founder said that nature-inclusive design being used as standard across any offshore or coastal construction project would be welcome. This includes projects like ports and harbours, along with energy infrastructure.

The Sustainable Ocean Alliance’s (SOA) Caribbean representative Khadija Stewart and Kenley Kenneth, who was Palau’s youth coordinator for the seventh Our Ocean Conference in March, both spoke at the Large Ocean States event. They also shared their hopes about the conference with The Canary. Stewart said she would like to see the scaling up of finance schemes for existing ocean solutions. Essentially, rather than just promoting more and more innovation, Stewart suggested that officials need to get serious about financing and scaling up the solutions we already have. Kenneth, meanwhile, said that he would like to see “concrete outcomes” in terms of how officials are going to invest in young people’s work.

Ready to do everything

The Canary asked these young people what different outcomes they’d expect if the UN Ocean Conference were led by them and their peers, rather than older people. Their responses again illustrated what the global community has to gain by letting them lead the way.

Stewart was confident that a youth-led conference would yield diversity in the range of solutions that would be appropriate to the needs and concerns of people in different parts of the world. She suggested that a Global North perspective tends to dominate in such talks at present. Kenneth argued that, currently, there’s also a tendency to involve young people in the conversation about the problems, but not in the implementation of solutions. With young people at the helm, he said, their many ideas would be funded and put into action. Birbeck, meanwhile, said that a conference led by young people would offer radical and swift decisions. Moreover, he asserted that young people wouldn’t pussyfoot around when it came to calling out and ejecting bad actors, such as extractive industries that engage in greenwashing.

Diversity, decisiveness, speed, action, and radical thinking. These are essential if we are to meaningfully tackle the triple crises Guterres spoke of. It seems that many young people stand ready to try and – in the UN chief’s words – “do everything to reverse” what older generations have done to the ocean and planet.

The question is, are those who bear political responsibility for the environmental mess we’re in willing get out of their way?